There’s probably no question that I am a religious nerd. However, that does not excuse the fact that my husband has done Dorcas wrong.

This situation is not unlike the occasion on which Mark (the husband under discussion) gave me an Enya CD and proceeded to launch a campaign of ridicule that involved playing the most popular tune from the CD over and over and over (and over) on the piano until we were all so sick of it that the last thing I wanted to do was to actually listen to the CD.

Even today I turn off the radio when that song comes on. And I have never even opened the CD.

I am dismayed to report that Mark has almost succeeded in doing the same to my very favorite Bible character of all, Dorcas. 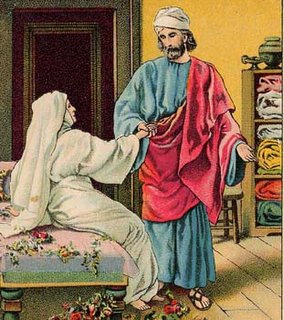 The thing is, when I was a little kid I heard these incredible stories from the book of Acts about Dorcas, stories about this woman who used the skills she had to serve God in a time when women didn’t have many options at their disposal.

That theme was very meaningful to me as a child.

Plus, I thought Dorcas’ death and subsequent rising from the dead were all very dramatic and exciting. After all, she was “devoted to good works and acts of charity” and a lot of people showed up to cry at her first funeral. I thought if there was anyone in the Bible I’d like to be (aside from King Asa the Halloween I was 5, of course), that would be Dorcas.

I NEVER laughed at her name; I always listened with rapt attention and tried to paint mental pictures of this woman who cared for everyone and whom everyone loved. I still don’t think there is anything funny about Dorcas at all. (By the way, did you know there is an institution of higher learning called Dorcas University?)

However, I personally have come to believe that it’s genetic evidence of my husband’s disrespectful sense of humor passed on to our children that, one day, as I began to tell them (my precious offspring, to whom I am solemnly committed to passing down deep truths of faith) the story of Dorcas I was stopped almost as I began by chortles, snorts and giggles.

I can’t be absolutely sure, but I think Mark started it. (Just goes to show you should be very careful who you marry . . . that person will undoubtedly have some influence on your children.)

Nevertheless, I pressed on, telling my kids the story (hoping that maybe one of them would like to be Dorcas for Halloween??), but was soon overwhelmed by hoots of laughter and comments like, “Her name was DORCAS? Hahahahaha! She must have gotten teased a LOT at school!”

I tried to rise above it, but all of my efforts to explain that Dorcas was a Greek name and probably did not have the connotations they associated with the English word all went ignored.

I was then and I continue to be now totally and completely indignant about the whole situation. My efforts to pass down a meaningful example of Christian living . . . my attempts impart biblical knowledge . . . my sharing of a faith story that meant something to me . . . all of these things, thwarted.

There are many injustices in this world, but for some reason this one strikes me as especially egregious. I wonder: if I don’t speak up, who will combat this loss of innocence and reclaim the inspiration of Dorcas? Who will campaign to right this wrong? Who will work to insure that millions of children in the world today will not miss hearing the story of Dorcas because they are laughing too hard at her name? And, perhaps most alarming, who will make sure that some devout little child can choose, without ridicule, to be Dorcas for Halloween?

I don’t know the answers. All I know is that Dorcas got dealt a bad hand. She was definitely a candidate for Sunday School fame on the level of King David and Simon Peter, but all has been undercut by her silly name and the back-row snickers of those less-holy among us.

Here’s the bottom line. There’s enough pain in this world already. It’s time to reclaim Dorcas for the rest of us.

January 20, 2006 The Confessions. Mine, Not Augustine's
Recent Comments
1 Comment | Leave a Comment
"Any updates with the blog ?"
Stanley Sabbath as Radical Witness
"I really, really, really liked this article. Thank you. ♥"
maguilar9855 When God Gets Political: Enough
"To the author/researcher: I am wondering if you uncovered a time when, as Dr. King ..."
Judith March Hardie MLK at The Riverside Church in ..."
"Church is boring."
Ivan T. Errible Sabbath as Relationship
Browse Our Archives
Related posts from Talk with the Preacher