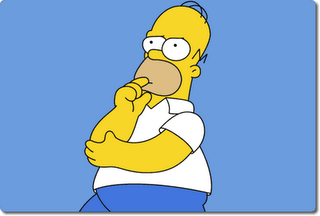 I was rather skeptical.

Not unlike my friend Homer I scratched my chin in wonder as a friend and colleague told me of her great success using a book called The Gospel According to the The Simpsons as a jumping off point for group discussion of faith issues.

I’m not too much of a TV watcher, but I have watched my share of The Simpsons and, truthfully, did not instantly connect those 30 minutes of laughter with deep theological conversation.

The Simpsons are a family full of foibles, and creators have been criticized for depicting an American family like the Simpsons. Even George Bush, Sr. chimed in at the 1992 National Religious Broadcasters convention when he declared that we needed to be a nation “closer to the Waltons than the Simpsons.”

But we’ve been watching and discussing in two different groups at church, and are slowly finding that perhaps The Gospel According to the Simpsons holds quite a bit of meaning and substance for those of us trying to figure out what it means to live the Gospel in everyday life (could it be that we’re really more like the Simpsons than the Waltons?).

This is how our experience has been. Last Tuesday a group of young adults got together to watch Homer vs. Lisa and the Eighth Commandment, where young Simpson daughter Lisa has a moral crisis when her father, Homer, acquires illegal cable.

There were moments of hilarity, such as when Lisa visits her minister, Rev. Lovejoy, to ask if stealing is wrong. Lisa says: “So even if a man takes bread to feed his starving family, that would be stealing?” Rev. Lovejoy responds: “No. Well, it is if he puts anything on it. Jelly, for example.” And Lisa answers: “I see.”

But there were also moments of serious contemplation, such as when we considered Miss Albright, Bart and Lisa’s Sunday School teacher’s assertion that “the 10 Commandments are 10 easy rules of live by.” True? Are they really easy to follow . . . and, further, are following the 10 Commandments what our faith is really about?

And how about the more sensitive issue of stealing? Is stealing always wrong? ALWAYS? What about using your neighbor’s wireless Internet . . . ? Is that stealing?

It was true what my friend said . . . there’s a whole lot of theology in the Simpsons, and we’re having a pretty good time laughing and thinking together. Who would have thought?

September 22, 2006
The Most Wonderful Time of the Year
Next Post

September 26, 2006 Burning Questions
Recent Comments
3 Comments | Leave a Comment
"Any updates with the blog ?"
Stanley Sabbath as Radical Witness
"I really, really, really liked this article. Thank you. ♥"
maguilar9855 When God Gets Political: Enough
"To the author/researcher: I am wondering if you uncovered a time when, as Dr. King ..."
Judith March Hardie MLK at The Riverside Church in ..."
"Church is boring."
Ivan T. Errible Sabbath as Relationship
Browse Our Archives

A night with Lot in Sodom,...
slacktivist
Related posts from Talk with the Preacher