Jesus Through the Cracks

I used to spend a lot of time gardening. You have to spend a lot of time, when you live in New Orleans, because if you don’t tame the yard well, the yard will try to tame you. Here in the Northeast, the change of season helps a little with the task of keeping things in line; just when the weeds seem to be overwhelming the first freeze slows everything down.

But I love to garden, and I’ll never forget a particularly tenacious plant that grew in the flowerbed along the side of our house in New Orleans. You couldn’t pull it out with your bare hands-its roots were too embedded. I fully admit to liberally using chemicals to try to get rid of it, but all that did was kill the plants I wanted to keep alive. Turns out that 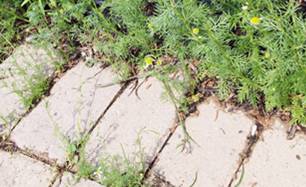 all I could do was head out Saturday morning and cut it back, then head out the next weekend to cut it back again. I finally gave in to the realization that no matter what I did, that plant would grow and grow and grow in my flower bed . . . and sometimes other places, too. Very often seeds would somehow migrate from the flower bed and I’d notice shoots of this plant even pushing up through the cracks in the concrete driveway.

I remembered that plant this week when I heard a lecture delivered by Joerg Rieger, professor of Systematic Theology at Perkins School of Divinity, Southern Methodist University. Rieger was lecturing on his new book, Christ and Empire. I love Systematics and rarely get to sit in a lecture and listen, so I listened ready to relish every word.

After about the first 20 minutes, though, I was starting to get a little worried.

Rieger’s thesis is that Christian faith is shaped by power and politics; that we cannot study God without studying the Empire in which faith in God is lived out. Over and over throughout history, Rieger showed us, power and political regimes have co-opted Christian faith. It happened with Constantine, in the Middle Ages, too, through the Reformation and various periods of Colonialism and, he said, it is still happening today–politics in America is a perfect example of that.  To ignore the influence of the Empire, Rieger said, would be folly for those of us trying to understand and develop faith in God. Why? Well, because the Empire will sneak its way into our understanding of faith somehow. Better to ask the questions, examine the power structures and go into this quest of faith with our eyes wide open, he said.

I agreed with everything Rieger was saying, but, frankly, the more concisely he made his case the more depressing it all became. My job (and even some days I would say “my calling”) is to live out the timeless message of the Gospel in the admittedly flawed but still redemptive (I thought) community of the church in the world. If it’s true, though, what Rieger says about Empire co-opting Christian faith, I wondered what message this has for the church?

Or, worse, are our efforts promoting and building something that is not true faith in Christ at all?

I raised my hand a little timidly because I am not a systematic theologian (before that moment I’d thought I sometimes was a practical theologian) and asked my question: if Christian faith is constantly co-opted by the power of the Empire, why are we wasting our time?

Rieger, whose unkempt bush of gray hair and rumpled professor look clearly indicated this was a man who spent a lot of time in academia, looked up and smiled. His eyes twinkled, in fact, as he became increasingly animated. “That’s the wondrous hope of God’s work in this world!,” he exclaimed.  “The Empire tries its best to co-opt the Gospel, to smooth it out, cut it back, stomp it down. The thing is . . . Jesus keeps coming up through the cracks.”

Jesus keeps coming up through the cracks.

No matter what the Empire of this day happens to be, the message of the Gospel will keep sticking its head up . . . through violence and suppression, through evil and even through structures that oppress and violate–even structures that claim to represent Jesus himself. Always speaking for those who have no voice, always challenging the smooth and powerful work of the Empire, Jesus keeps coming back, over and over again, in the most unlikely places to remind us that the living message of the Gospel can never be stomped out, contained, repackaged or destroyed. No matter what force of Empire we live with today, we can look back over thousands of years of humanity trying to contain God and then keep believing: the hope of the Gospel will bubble up and sprout anew over and over again: Jesus will keep coming up through the cracks.

And that Jesus would keep coming back, even though we try in every possible way to contain and co-opt, sometimes even extinguish his message, well, this is where the church’s hope is found . . . right there, in the cracks.

November 19, 2007 Educating the Future Church
Recent Comments
6 Comments | Leave a Comment
"Any updates with the blog ?"
Stanley Sabbath as Radical Witness
"I really, really, really liked this article. Thank you. ♥"
maguilar9855 When God Gets Political: Enough
"To the author/researcher: I am wondering if you uncovered a time when, as Dr. King ..."
Judith March Hardie MLK at The Riverside Church in ..."
"Church is boring."
Ivan T. Errible Sabbath as Relationship
Browse Our Archives
Related posts from Talk with the Preacher