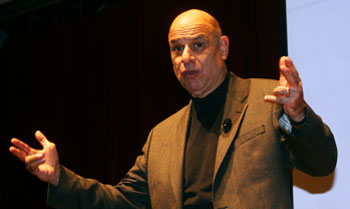 Who among us could ever have sat through a youth rally featuring Tony Campolo and not be irrevocably influenced?  I first saw him in the sanctuary of First Presbyterian Church at its former location in downtown Honolulu–probably sometime around 1983, when he came to preach at some youth event my mother forced me to attend.

Tony’s a very engaging speaker; he easily invites audiences to laugh and cry and think about faith.  He also has had the courage to speak out on issues of radical inclusion, a rare and prophetic voice in the evangelical world.

Tony Campolo will be at Calvary on Friday night to talk about one of his personal passions, ending child slavery in Haiti.  In an evening hosted by Beyond Borders, we’ll all have the opportunity to hear more about what’s going on in Haiti.  Here’s the official invite: “Just a ninety-minute flight from the United States as many as 300,000 children are trapped in a life of slavery. They are called “stay-with” children because they live apart from their parents and stay with the families they serve. Many work every waking hour and face intense physical, psychological, and sexual abuse.  There is hope!  A small but growing movement in Haiti is working to protect these children, reunite them with their families, and bring an end to child servitude.  Come learn what they are doing and how you can help.”

Kites will be the visual symbols of freedom that night–our sanctuary will be filled with Haitian, hand-made kites, and we’ll hear this amazing poem written about their power to inspire the children of Haiti.  Join us!

The wind will carry you liberated
up above the heat
and the stink of fetid water
to be lightly kissed by the morning sun
and dance in the azure sky.
My heart rejoices as you rise up
higher, higher.
Tethered to you by a fragile cord
I imagine that I am reaching for the clouds,
my bare feet callous on the broken,
blazing asphalt.
But you skip lightly from breeze to breeze.
You are plastic, sticks and string,
I know because I made you.
But for today,
you are my soul
and in you
I can be free.
Port-au-Prince, Haiti
April 1999
Previous Post

June 7, 2009 A Pastoral Letter
Recent Comments
2 Comments | Leave a Comment
Browse Our Archives
Related posts from Talk with the Preacher