The Art of Running a Nonprofit: Some Brilliant (Admittedly Unoriginal) Thoughts

I didn’t really know what I was walking into when I went to an afternoon meeting at the invitation of some colleagues yesterday, but it didn’t take long to realize I should be paying attention.  You know those times when you’re listening to someone and it dawns on you that you’re in the presence of greatness?  Everything that came out of Michael Kaiser’s mouth sent me running for a pen and paper, and this morning I am still mulling over a lot of what he said.  I suspect I’ll be thinking about it for awhile.

Michael (Mr. Kaiser??) is the director of The Kennedy Center.  You can read more about him here, but you should know that he is renowned in arts circles for taking struggling nonprofit organizations and turning them into thriving, growing, successful agencies where the arts flourish.  But so much of what he said applies, in my mind, anyway, to churches.

Some of what Kaiser suggested we already do at Calvary; some of his ideas we have been kind of trying to do; and some (I feel I can safely say) we never even imagined we should.  The basis of his thoughts on the rebirth and stabilization of a nonprofit organization have to do with this circle he described.  He said, to get back on your feet it takes four steps:

First, great programming.  During hard financial times, when we feel like we should be cutting back, when we’re worried about money, we are always tempted to cut programming.  The thing is, revitalization and new life begins with creative and expectation-defying programming.  Be wild; be creative; think outside the box. 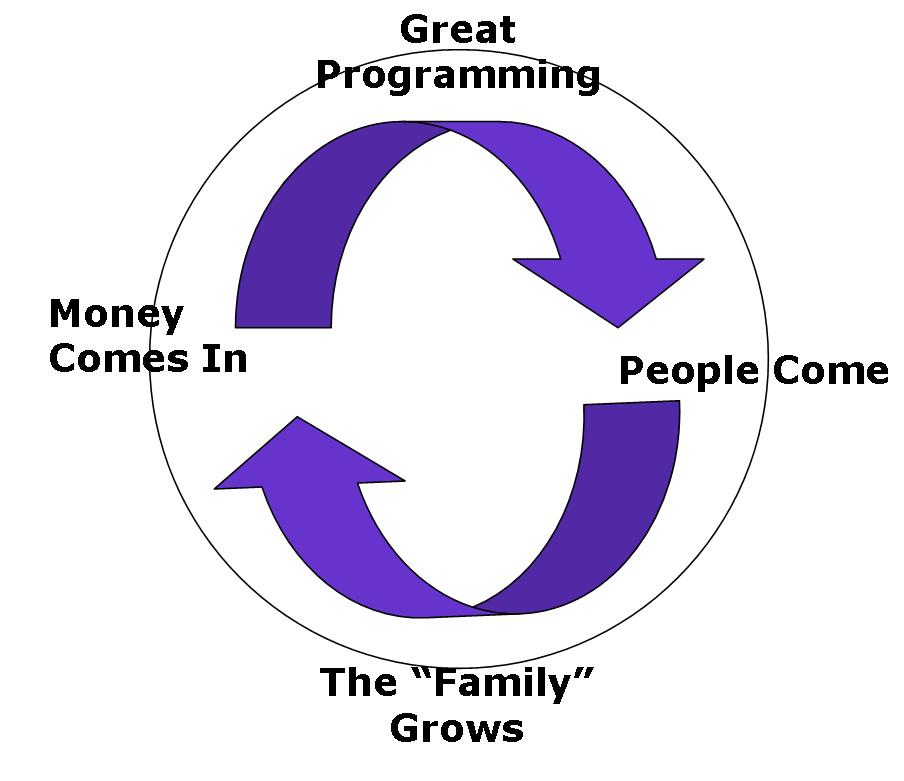 Second, when you do, people come.  Visitors come, the media takes note, folks start to notice.  Suddenly, your agency/organization/church is drawing attention it was not drawing before, and your numbers increase.

Third, with increased people, your “family” grows.  By “family,” Kaiser explained that he meant “circles of influence.”  That could be members, attendees, partners, donors, investors, patrons . . . whatever.  The group made up of people who are invested in the success of your organization grows—expands—becomes stronger and more influential.

Fourth, as your interested base grows, more money comes in.  It’s not really any special trick or anything . . . it’s just a true fact that people want to give money to support something they believe in.  When all of these first three factors are in place, the financial health of an organization will be sure.

Kaiser had more to say about this cycle, and (just to warn you) I’ll probably write about that, too.  But his final point was that this is a cycle we must work hard to put into place, then keep humming for several cyclical turns, until the organizations we are working to revitalize are flush with great programs, amazing people, enthusiastic supporters, and ample financial resources.  Sometimes it takes awhile; it certainly take more than just one trip around the cycle.

I’m taking this advice today and dreaming about all the creative programming that we could do over the next five years . . . or at least getting a start on Sunday’s sermon.

October 15, 2010 Everybody Needs a Pastor
Recent Comments
2 Comments | Leave a Comment
"I really, really, really liked this article. Thank you. ♥"
maguilar9855 When God Gets Political: Enough
"To the author/researcher: I am wondering if you uncovered a time when, as Dr. King ..."
Judith March Hardie MLK at The Riverside Church in ..."
"Church is boring."
Ivan T. Errible Sabbath as Relationship
"Well, you savor your specialness!"
Ivan T. Errible Sabbath as Relationship
Browse Our Archives