If You See Something, Say Something

On my way to work every morning I pass a bus stop that has been driving me crazy for months.  Hanging in the bus stop is a poster with one ominous looking (dark skinned) man in the foreground and two women behind him staring with fear in their eyes.  The poster reads, “If You See Something, Say Something.”

This poster, along with other marketing strategies, is part of a wider anti-terrorist campaign in larger cities, and in DC most recently this has been taken on by the Metropolitan Police Department and DC city government.  The slogan “If You See Something, Say Something,” is actually owned by the Metropolitan Transit Department of the city of New York, which has given permission for cities all over the world to use their slogan.

Every morning for months I’ve passed this poster, and every time I see it I feel a strong sense of disquiet.

It’s not that I’m a particular supporter of terrorist activities; rather I think I feel very uncomfortable with what seems like an exploiting of peoples’ deep fears, contributing to the anonymity and isolation of life in a big city, and encouraging us to be suspicious of groups of people who have already been unfairly stereotyped in the media.

To be honest, the poster reminds me of posters I have seen in the National Holocaust Museum.  Did I mention disquieting?

It seems to me that the work of the Gospel is, in part, to bring disparate groups together, to break down differences, to 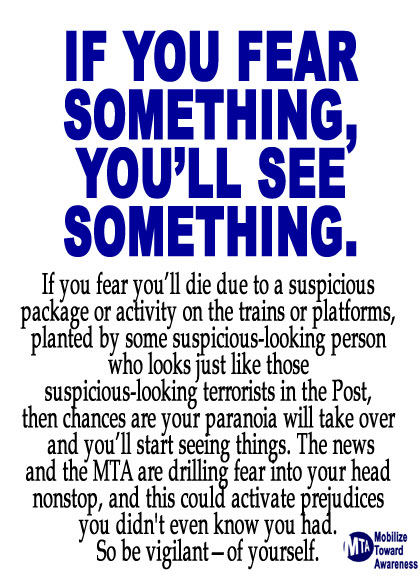 help us see each other with new and generous eyes that alight on the many things we share in common instead of the differences that breed fear, insecurity, and violence among us.  Learning to live radically and inclusively, seeing the world through eyes of love instead of fear…these will far encompass the limitations that fear and division impose.  Jesus was the one who came to teach us, after all, that love is more powerful than hate…remember?

A group of artists in New York City responded to the “If You See Something, Say Something” campaign in their city by creating a competing logo that reads, “If You Fear Something, You’ll See Something.”

And, I think I prefer their poster.

I would rather live believing in God’s dream of a world where people default to actions of love, instead of sitting at a bus stop every morning with my world shrinking steadily as I shiver with the fear of seeing something.

February 2, 2011 Redefining Blessed
Recent Comments
6 Comments | Leave a Comment
"Any updates with the blog ?"
Stanley Sabbath as Radical Witness
"I really, really, really liked this article. Thank you. ♥"
maguilar9855 When God Gets Political: Enough
"To the author/researcher: I am wondering if you uncovered a time when, as Dr. King ..."
Judith March Hardie MLK at The Riverside Church in ..."
"Church is boring."
Ivan T. Errible Sabbath as Relationship
Browse Our Archives
Related posts from Talk with the Preacher