I wrote recently at Associated Baptist Press about my friend G. Travis Norvell and his quest to take prayer to the streets.  Because of space I didn’t have time to tell some details I wanted to share, so here’s some more on the Rev. G. Travis Norvell’s prayer station at Jazz Fest in New Orleans last week. 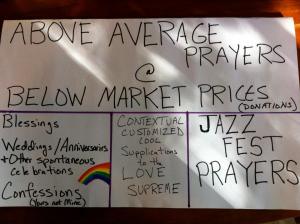 Here’s a little background.  Rev. G. Travis Norvell staked out a little station outside the front gates of New Orleans’ Jazz Fest last week.  He set up where the crowds would pass by, with a sign that read: “Above Average Prayers @ Below Market Prices (Donations).”  There he sat, with his manual typewriter, writing prayers for people who wanted them.

I was so curious about Travis’ experience that I asked him for more information.  Here’s what I wondered and what he answered:

Where did you get the idea to do this?

A few years ago I wanted to set up a table and two chairs on St. Charles Avenue. On the table would be an urn of coffee, two coffee cups and sign that read Conversation? I would be in clerical garb. But I chickened out and never did it. I wondered if anyone would take me up on it… Then last week I heard the story on NPR about a guy who quit his job on April Fools Day a few years ago to write poetry. On any given day he sits on the side walk in San Fran with his typewriter and writes poetry for people. I thought that is great. I said, “I’m going to take my typewriter and write prayers for people as they enter Jazz Fest.”

I love manual typewriters. But I also wanted people to have something they could physically hold in their hands or put in their pockets. People would stand around as I typed and then insist on reading them as soon as I finished. For a few people I read the prayer but even afterwards as soon as they had it in their hands they would read it aloud for their own ears.

What did you learn about people and how they think about prayer/God/the church?

A friend who grew up in the French Quarter put my experiment in an interesting perspective last night. He watched conservatives force their style of religion on people whether they wanted it or not whereas I offered prayer only if people wanted it. The amazing thing: people actually wanted it! They didn’t ask for direction or forgiveness or answers to deep questions. They asked for other kinds of help – blessings for a wife who couldn’t be there, blessings for on a class action lawsuit, continued happiness in their wedding, blessings for continued friendship. I would say it was first time I was around a group of people who were concerned with the present moment.

How did people respond to your offer of prayer?

Jazz Fest, for me, is like Christmas and Easter and Birthdays all wrapped up into one event. I’m already “at church” why not pray with and for “the congregation?”

Did this experience change the way you prayer of think about prayer? 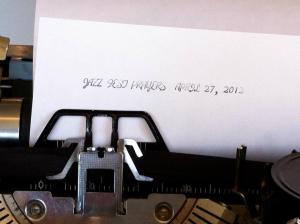 I don’t know if the experience will change the way I pray but it will change the way I approach the blessing aspect of pastoral ministry….  As a pastor you always give of yourself but rarely either receive or let others receive. In some way I was offering at Jazz Fest for others what I need myself.

Give us an example of a Jazz Fest prayer.

Love Supreme,
Help these people find life anew
May the rhythms of this day fill their souls
May they fill their bodies with bowls of pheasant gumbo
May they let go of judgment
and allow You to love this mass of humanity
so that they can be the children you have called them to be.
Amen.
Previous Post

May 6, 2012
Everything Changes: From Barren to Bountiful
Next Post

May 9, 2012 Words of Oscar Romero, for North Carolina Today
Recent Comments
2 Comments | Leave a Comment
"Any updates with the blog ?"
Stanley Sabbath as Radical Witness
"I really, really, really liked this article. Thank you. ♥"
maguilar9855 When God Gets Political: Enough
"To the author/researcher: I am wondering if you uncovered a time when, as Dr. King ..."
Judith March Hardie MLK at The Riverside Church in ..."
"Church is boring."
Ivan T. Errible Sabbath as Relationship
Browse Our Archives
Related posts from Talk with the Preacher