I Believe!…or The Book of Mormon As a Compelling Case for Institutional Religion

You know what they say: if we can’t laugh at ourselves who can we laugh at? 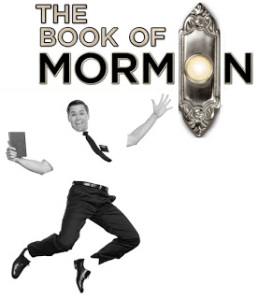 Apparently the answer to that question is: earnest and well-intentioned religious people.

At least that’s what everybody seemed to be doing the other night when a friend and I attended the opening of The Book of Mormon at the Kennedy Center.

The Book of Mormon is a religious satire musical that debuted on Broadway in 2011.  Since its debut it has received much critical acclaim, lots of popular attention, and 9 Tony awards including one for Best Musical.  In my town everybody wants to see it…so much so that the Kennedy Center’s website crashed with all the traffic generated the day tickets went on sale earlier this year.

This musical is the story of two devout young Mormon men who go on their mission to rural Uganda with the task of sharing their faith and convincing Ugandans to join the Mormon Church.

As the musical was written by the same folk who created South Park and Avenue Q, you can imagine that the entire show pushes hard against every boundary of polite society and has the potential, with very little stretch of the imagination (if any), to offend a lot of people.

On the surface it’s an outrageous commentary on evangelical devotion and institutional religion, especially the culture of the Mormon Church.  And you know how we all are about religion—especially our own: super protective, a little bit defensive, often chagrined (but only with people in the know).

The Book of Mormon is meant to exploit every one of those feelings and more, touching that raw nerve in anybody who has issues with institutional religion.

Which is, of course, everybody.

When news that I planned to attend The Book of Mormon hit Facebook some were concerned: even non-churchy folks who had seen the show felt distinctly uncomfortable knowing I’d be watching…because if your average, mildly religious person felt squirmy in such a setting, how would a decidedly religious person like me (you know: super holy (!), a bit more religious than most, representative of institutional religion, etc.) handle the bad language, distasteful humor, and (perhaps most of all) criticism?

I imagined that all my worried friends thought I might cry in frustration, pick up my things and stalk out, picket the front doors of the Kennedy Center, or conclude that my life—long devoted to regular and institutional practice of my faith—just had no meaning anymore.  And while I am so appreciative of their concern, there really was no need to worry.

The Book of Mormon is actually not a 2 hour exercise in making fun of people like me; it’s really a case for institutional religion and all it has to offer the world.

The musical certainly gets in its jabs at the Mormon Church, but it also uses institutional religion as a scaffolding from which to offer searing commentary on all sorts of things from racial injustice to the Disney Corporation: economic disparity, white privilege, patriarchy, gay culture, African governments, the global AIDS epidemic…the list goes on and on.

In fact, the musical demonstrates in a stunningly creative way the value of institutional religion in our society.  Witness:

One of the very touching moments of the show comes when Elder Price, who has had his shiny, perfect faith shaken to its very core, sings a song called I Believe. This sweet, ridiculous ballad is a wildly exaggerated ode to faith—an articulation of the very mystery of institutional religion at its best: reminding us that believing isn’t about the intellectual grasp of a list of irrefutably proven facts.  Instead, believing is about giving your heart to something bigger than yourself, something that helps you remember and live into the best promise and possibility of being human.

Admit it: it would hardly be worth writing and producing an entire musical about something that didn’t matter to anybody, right?

It is true that The Book of Mormon offers some harsh and cuttingly honest critiques—not just of the Mormon Church, but of the whole of institutional religion.

As we know, the institution is often flawed and can be in some expressions downright evil.

But that’s precisely why we need stark truth telling like we get in The Book of Mormon.  It’s worth the hard questions and painful critique to keep us honest, to keep us focused on what we say we’re here to do in the first place.

While I’m quite sure all the people sitting around me at the Kennedy Center would have been mortified had they known what I do for a living, in point of fact I kind of felt sorry for them.  Here’s why:

While the show is more than funny enough for the casual, a-religious attendee, that person might have no idea how much more funny the show is when you get all the inside jokes: the distant yet distinct strains of choral music; the leather-bound holy texts; the clear memory of your teenage-president-of-the-church-youth-group-self teaching a Bible study with full assurance that you were totally, absolutely right—about everything…you know, all of that.  Who can possibly fully understand the hilarious innuendos of such without having lived them?

After all, if you can’t laugh at yourself, well, you know what they say, right…?

And one more thing.

You might wonder: how could I, a religious professional who certainly does not promote blasphemy as generally acceptable and who has, in fact, been accused of prudery when looking askance at her teenagers’ jokes (may they have teenagers who do the same to them), possibly—ever—think The Book of Mormon acceptable entertainment, much less social or religious commentary?

Well, that’s because (of course), it’s a trick.  The writers and producers of this musical don’t want us to know it’s not a criticism but rather an endorsement of institutional religion with all its gifts and faults.  They think all of us religious types just would never watch all the way through given all the bad language (that we ourselves never use).

I’d bet they’d never admit we’d guessed it all along and, in fact, had already articulated the same—our Jesus just doesn’t usually wear such a cool costume.

July 17, 2013 Guest Blogger Jac Whatley: A Few Things I've Learned Along the Way
Recent Comments
0 | Leave a Comment
"Any updates with the blog ?"
Stanley Sabbath as Radical Witness
"I really, really, really liked this article. Thank you. ♥"
maguilar9855 When God Gets Political: Enough
"To the author/researcher: I am wondering if you uncovered a time when, as Dr. King ..."
Judith March Hardie MLK at The Riverside Church in ..."
"Church is boring."
Ivan T. Errible Sabbath as Relationship
Browse Our Archives
Related posts from Talk with the Preacher