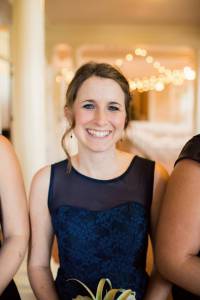 Myra Houser is a Calvary member; in her spare time she’s in graduate school for history. She supports the Shalom Scholarship and hopes everyone will donate, and she loves DC. She blogs about these and related things here.

Please note: This is a satire (sort of). That means that sometimes it says the opposite of what it means in a misguided attempt at humor.

Pastor Amy asked if I would consider blogging for this little project on how much I love and adore church and all of that, which is kind of awkward, because I’ve been out of town and not at church in more than two months. Honestly I don’t even know if I should go back, because I’m probably past that childish phase in my life.

Most of my two months focused on a very important quest to become smarter and better than you simpletons who actually believe in God or community or whatever it is. I’ve been hanging out with other pseudo-intellectuals order to solve the problems of the universe.

One thing I learned is that it’s really important to study churches and missionaries, because they can help us better understand our societies. If we can just figure out whether missionaries were awful imperialist warlords or benevolent simpletons, then we won’t have to wrestle with our own disbeliefs, anxieties, or mistrust of people. I mean, what the F@#* is with missionaries and all of that wanting people to have food and literacy and stuff? They just assume that everyone should share their exact beliefs and base their whole entire existence on that and nothing else and fake actually caring about people and hang out with them, and we all know that you can’t make big generalizations about everyone.

Anyway, all of the missionaries, especially the paternalistic ones of the nineteenth century, are just like American megachurches which are just like all churches and go a long way toward showing us why people are duped by religion. Well, okay we don’t know why, but someday we’ll find out—and soon, especially if we sit in rooms full of people who are skeptical about religion and therefore know the key to why people choose to believe. Er, I mean, why they are dumb enough to fall prey to anything without even ever thinking about it.

Just think, people, think! If you did, you would discover that obviously everything in life makes sense and can be explained one hundred percent of the time by examining the behavior of humans, a species well known for our rationality and distinct lack of emotion.

I don’t know. I couldn’t even sit in a room and talk about the pitfalls of religion for long enough, because even though I was away, I kept having to 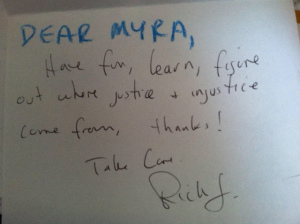 read these notes from people in my church. My brilliant husband, Jason Stuart Smith, deserves full credit for making people write them. Anyway, I was gone for two months and every single day I got these notes that were all like, “We miss you!” and “Hope you’re having fun, but come home soon!” and had drawings and stuff. I mean what, do these religious people think I actually have a heart that is capable of missing them? And what did they do, waste their time pretending that they actually cared about me when the only thing they wanted was to tell me that I was going to Hell? I’m not falling for that. No, I have a brain. 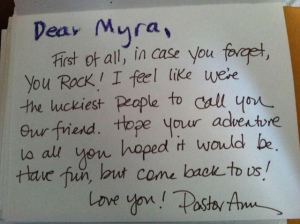 Actually, I do have a heart, and I used it to miss them and my community of people who aren’t overly cynical and can actually enjoy the simple pleasures in life, like having Cardboard Christina Aguilera cutouts in worship or voting to change church structure.

Ugh, maybe I’m not quite past that childish phase in my life just yet.

July 31, 2013 Guest Blogger Susan Sevier: Embracing the Questions
Recent Comments
0 | Leave a Comment
"Any updates with the blog ?"
Stanley Sabbath as Radical Witness
"I really, really, really liked this article. Thank you. ♥"
maguilar9855 When God Gets Political: Enough
"To the author/researcher: I am wondering if you uncovered a time when, as Dr. King ..."
Judith March Hardie MLK at The Riverside Church in ..."
"Church is boring."
Ivan T. Errible Sabbath as Relationship
Browse Our Archives
Related posts from Talk with the Preacher