Dancing in the Dark

I titled this post, “Dancing in the Dark” because it’s a collection of thoughts about faith.

And faith, to me, feels most often like…dancing in the dark.

In my experience faith has been responsive movement to something bigger than myself, something I can feel and sense and even seem to really know sometimes, but never can see quite clearly or describe enough to contain.

Sometimes that response looks like twirling with confident abandon.  And most often it looks like stepping tentatively, off-beat and often stumbling, into places I cannot see…all the while reaching out, again and again, to grab the steadying hands of others who are dancing with me.

This blog entry all began when my friend Tripp Hudgins asked me what I thought about this article by Nat Case, a self-described Quaker Atheist.

The truth is that I really liked the article; it made me think.

And then I wrote some things down.

(This probably won’t make much sense unless you read the article, so go take a look.) 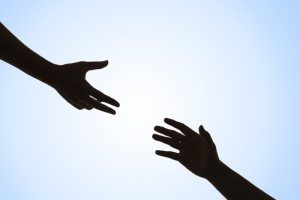 What struck me most about Nat Case’s article, “I Contradict Myself,” was what seemed to me to be an honest grappling with doubts and questions related to faith (or non-faith, as the case may be).  I respect that tension; it’s a kind of struggle that so many are unwilling or unable to take on.

And Case seems to know that, because he uses language that’s meant to prick our tender religious skins and challenge us to confront some hard questions.

But that’s okay.  In fact, it’s more than okay.  It’s good for us; it’s good for me.  Because the language we use to talk about God and faith and even religion is limited and weighted down with so much baggage it’s hardly useful anymore.

And that’s just the truth.

We need the discipline of the hard questions because sometimes, with all that baggage, those of us who struggle to believe dilute the traditions we know until we create that horrible mushiness of the liberal spiritual communities Case describes, where anything goes and everybody’s okay and if I closed my eyes I would think I was at a Kiwanis Club meeting.

So I here are a few thoughts in response to Case’s essay.

First, I respect Case’s descriptions of himself—as an atheist and a non-theist and any number of other descriptors that emerge here.  But I’ll say (and I think he might agree) that language is fundamentally insufficient to describe many things, not the least of which is the mystery of something (nothing?) bigger than we are.  I don’t know that any of the labels he uses fully encompass the complexity of a human grappling with the idea of the divine; perhaps it’s in the grappling that we find some real meaning, even if we can’t give it a name.

I wonder about that.

Second, belief—faith—comes in so many forms and expressions.

The faith of my childhood included Sunday School teachers telling me something was true and my believing it, no questions asked.  As an adult my faith is shaped and challenged, under girded and refined by things like study, spiritual practice, doubts and questions, community.

But the bottom line is that faith comes to us in myriad ways, through different revelatory channels, and it should never, ever be a finished process.  In fact, what Case describes here as a lack of faith actually sounds to me like real, authentic grappling with big questions, in my mind so much more an expression of faith than either blind adherence to a set of rules or the mushy liberal spirituality he detests.

It’s curious to me that we struggle to confine what we call faith to specific parameters when at its core faith is an acknowledgement of this mystery we experience and engage through our practice.

Third, this offensive mushy liberal spirituality Case cites comes with lack of focus.  It’s true.  And lack of focus doesn’t result in just vague, meaningless personal experience, it also gives birth to directionless, ineffective, and often destructive community.  Of course it’s ridiculous to assume we could gather a group of people together and unanimously agree on a complex systematic rubric to define and understand the big whatever’s out there (God?); you truthfully can’t even find that in the most rigid of faith communities.  On the other hand, to avoid meaningless mushiness you do need focus.

Which is why I find it curious that Case never mentions Jesus in his essay.  He mentions story, of which Jesus was a master, and a faith tradition based on the teachings of Jesus (Quakerism), but never Jesus himself.  And I’m not sure why, because questions of divinity aside—Jesus’ own divinity or the existence of some big being out there in the sky somewhere—Jesus’ message is pretty clear.

Jesus was a real person whose life calls us to a radical path, whose message gives us something tangible to hang onto, whose challenge is, in fact, as Case calls for, “a spine…a thing I must be true to, because otherwise it evaporates into the air, dirt and water of the hard world.”

Jesus’ is no namby-pamby, anything-goes spirituality.

His invitation is hard and challenging and it calls us to intentional individual and communal faithfulness, no matter where you are in your expression (or non-expression) of faith.

So, fourth, (and this is where Nat Case and I really agree), I applaud rigorous religious practice in the context of community.  Even when we struggle to express belief in a conformist way, faithful community calls us, again and again, to keep on trying to express it somehow.  I think of the AA slogan, “Fake it until you make it,” which, actually, is a way of believing.  It’s not practice without faith; it’s practice as faith in process, the acknowledgment that even if I can’t name it, there is some transformation underway.

I admire Case, and I admire those who take the discipline of community on in their lives, because that practice is often inconvenient and unpopular, and it sure doesn’t conform to a culture of consumption and ease.

And as communal faith practice works to shape and form us, it also calls out bigger and better possibilities than we could ever summon alone.  With the gift of community we can, as Case says, ask each other “the wondering questions” and remind our children of “the stories we want to become part of your life.”

In community we can also more effectively heal the world.

We can “show up for the main meal” but also learn to help cook and clean up, so together we can do things like visit prisoners, teach classes, protest injustice, care for and comfort each other, change systems that oppress, and live into something bigger than we can ever fully understand.  As Case says, it’s “what pulls us out of ourselves and gets us lined up to do what needs doing instead of arguing about whose idea is better.”

I suspect…that doing these things along with believing what we believe (or don’t believe) live in constant interplay, an intricate dance at which we become more and more assured with practice.  One of my great conversation partners as I thought this through said that he thinks faith “is as much about spiritual practice, discipline, loyalty, community, etc., as it is a belief system.  Most of my secular friends seem to think of it only as a belief system–one that they obviously don’t subscribe to.”

So I don’t know that I could ever articulate an answer to the question “who is God?” or even “is there a God?” that would satisfy Nat Case.  But I do know that I can show up in faith community right alongside him, and I can take on the challenge of “trusting more in the leaps of imagination,” as he says.

And most of all, I can keep asking the questions—all kinds of questions—because every time I do I take another step in that lovely dance of faith, made even more beautiful when it’s done holding the hand of another.