The Cost: What it Takes to Tell the Truth

This week I was trying to imagine how one might write a job description for a prophet and post it on, say, Idealist.  (I checked on Idealist, but currently there are no listings for prophet jobs.)  I’m guessing it might read a bit like this:

The prophet of Israel works as an independent contractor/representative of God to impact persons, impinge upon perception and awareness, intrude upon public policy, and evoke faithful and transformed behavior.

The prophet of Israel is responsible for the recruitment, training, and supervision of faithful Israelites.  S/he must be adept at mingling with common people as well as frequenting halls of power.  Interaction with political officials at the highest level is often called for.  The prophet of Israel must be an excellent public speaker with a varied and extensive vocabulary of words that convey doom and gloom.  S/he must be able to yell very loudly and hold the conviction that his or her position on every issue is right while everyone else’s is wrong.  S/he must have enough courage to say s/he’s speaking on behalf of the God of the Universe, and enough arrogance to personally believe it.

Qualifications for this position include, but are not limited to: first and foremost, the prophet of Israel must share the divine sense of urgency about the need to repent.  S/he must also have a demonstrated call and mandate from the God of the Universe.  Experience telling people they are sinning and working with uncooperative monarchs a plus.  Strong communication skills; a demonstrated passion for being right all the time along with the ability to work efficiently, intensely, and within an entrepreneurial environment required.  Must be authorized to work in Ancient Israel.

Doesn’t sound bad, does it?  Because, if you think about it, there are some potential perks to the job as prophet.  Take Jeremiah, for instance.  His long career led him in and out of the royal palaces of five kings, rubbing shoulders with a lot of powerful people.  He got to tell people they were wrong and he was right over and over again.  Then he got to watch those same people get what they had coming to them and say, “I told you so…!”

So really, there are some things about a job like this that could be pretty attractive.  But, as you know if you’ve been here with us in worship these past few weeks, it turns out that being a prophet is a hard, hard job.  It costs.  We see this over and over in the story of the prophet Jeremiah.

Jeremiah was a reluctant prophet.  He was the son of a priest and expected to enjoy a career like his father’s when God called him to become a prophet and to begin his forty-year career of telling the people of Israel they were making God angry and that they would pay a price for that.  Jeremiah accepted the call and direction of God, but he didn’t do it with excitement or enthusiasm.  I guess the perks of hanging out with royalty and telling everybody they’re wrong and you’re right weren’t enough to outweigh what he knew would be the costs.  Because telling the truth, living a life that stands in contrast to what everyone else is saying and thinking and doing, exacts a steep price.  Jeremiah is known as “the weeping prophet,” in large part because of the price he paid to tell the truth.

A few weeks ago we discussed Jeremiah’s compelling call—that he gave up many other things he could have pursued in his life to take on this whole-life endeavor of being a prophet of God.  Last week we spoke about the price Jeremiah paid of being alone—of feeling like he was out there on his own, vulnerable and lonely, because of the message he was proclaiming.

This week it’s even worse: Jeremiah’s heart is broken.

See, he’d told them.  He told them over and over and over again.  He’d spoken the message he was told to speak; he’d called the people out on their sinful behavior; he kept reminding them how they could fix it.  But they didn’t, and then the roof fell in.  What Jeremiah had been saying all along actually came to be; Jerusalem was captured, the temple was destroyed, the people were carried off to exile in Babylon, everything was in ruins.

And here is Jeremiah, weeping, weeping over the state of things—a state he knew was coming, but still, when it did, he was filled with devastation.  Things are so bad they cannot be fixed.  When Jeremiah weeps wondering if there is any balm in Gilead, he’s talking about a resin that was used commonly back then in medicines, and he’s saying—there’s nothing that can fix this.  No medicine, no band aid, nothing.  It’s here and it’s bad.

And Jeremiah’s heart was broken.

I was in the grocery store the other day and there was this announcement over the loud speaker saying that there was going to be a free gift opportunity in the produce section in five minutes.  The first five adults who made it over to the produce section starting in 5 minutes would receive a special, one-of-a-kind gift that you do not want to miss!

I finally got curious and decided to go over to produce.  Halfway there I could see other people heading over and I started rushing because I wanted to get my free gift—whatever it was.  Turns out this was a company selling these magical heating pads, you know like you use when you hurt your back.  And you had to stand there for five minutes and listen to the sales pitch before you could get your secret special, one-of-a-kind gift that you do not want to miss!

So, naturally, I stood there and listened.  And, seriously, those heating pad things seemed really neat.  You just had to press this little button and start this chemical reaction that would make the heating pad heat up; they had several different sizes for your shoulders, even your hands; and, for a limited time, you could get their most popular model—the lower back pad—at the unprecedented rate of 50% off!

Now, I don’t need any heating pads.  Really, I was there to buy milk.  But as the woman went on with her sales pitch I started to think—you know, maybe I do need a heating pad or two.  You know, in case I pull a muscle in my back or something sometime?  And they are so amazing, too!  And 50% off if I buy now…!

At the end of her speech I was sold.  But then the woman asked if anyone had any questions.  One of the people in the crowd raised his hand and asked her—out of all the options they were selling—which one did she personally find the most versatile?

The woman immediately answered: “You mean me personally?  Oh, I wouldn’t know.  I’ve never used a heating pad before.”

That ended any potential sale as far as I was concerned.  Right then I immediately found her whole presentation completely disingenuous.

So, I left to go get my milk (but not before picking up this really cool cheese knife as my free gift—score!).

Jeremiah had a message to send, a people to convince, an idea to sell, you could say.  They don’t tell you this in the job description, but the message of a prophet doesn’t ring true without personal investment.  To tell a truth that will change peoples’ minds, you have to care—you have to own what you’re saying, you have to believe it yourself, and it has to really matter to you whether your message gets across.

That’s what good prophets do.

But there’s a cost to doing that, for sure.  Because when you care enough to tell the truth, as Jeremiah did with the people of Israel, well, when they don’t hear you, when they don’t respond in time and what you’re saying actually comes to be, the grief and pain you feel over the resulting devastation can just break your heart.

There’s a cost to being a prophet; you pay a steep price to tell the truth.

Churches are notoriously bad at marketing.  That’s not my opinion; it’s just an objective fact.  To illustrate I’ll tell you about a picture I saw this week of 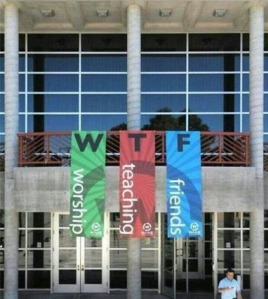 marketing signs on the front of a church building.  Hanging right above the front doors of a large mega church were three banners, hanging longways: green, red, and blue.  On the green banner, sideways, it read “worship”.  On the red banner, “teaching”.  On the blue banner, “friends”.  All things you want to find at church, right?

But someone had the brilliant idea to put the initials of these various elements of church life at the top of each banner—you know, in big, bold letters.  So the three banners reading “worship, teaching, friends”, running down the banners sideways, were topped with the initials WTF.  In other words, when you happened to glance at the front doors of this church, the first thing your eye would see would be the huge letters WTF.

Okay, that’s a pretty bad mistake.  But, you know, the thing is: I am not sure how even the best and brightest on Madison Avenue could spin what we’re up to here.

And, really, that job is not very glamorous or marketable.

Still, we have to tell the truth, like the people in Birmingham did 50 years ago…with the end result a bomb, in their Sunday School rooms of 16th Street Baptist Church.

And, we have to tell the truth when a troubled soul buys a gun and three days later arrives at the Navy yard and kills 13 innocent people just going about their business.

And we have to tell the truth when our elected officials cut food stamp assistance to over 4 million people, many children, who need help getting enough to eat.

We have to tell the truth.

We have to tell the truth, because we profess to be followers of Jesus the Christ, the one who told the truth over and over, and paid the ultimate price because he did.

The thing is, we’re called by God to be radical truth-tellers, prophets in a world desperate for something—anything—genuine.  When we answer the call follow Jesus, like Jeremiah we’re signing on to live genuinely, and to tell the truth.

Even if it breaks our hearts.

September 29, 2013 The Bishop Wept
Recent Comments
0 | Leave a Comment
Browse Our Archives
Related posts from Talk with the Preacher