Today is the fourth Sunday of the season of Easter, typically known as Good Shepherd Sunday—you’ll notice many of the texts in worship today reference that metaphor for Jesus.

But we’re sticking with the assigned texts from the book of Acts for these weeks after Easter, following the adventures of Jesus’ first disciples as they struggled to find their footing in the light of resurrection. Remember that Jesus had ascended by this point in the story; the disciples were trying to figure out what was next for them. They’d known Jesus; they’d become sold out followers of his gospel message; and they’d just been witnesses of resurrection. Having lived through all of that, they were now tasked with building a community in which the gospel could take root and begin to flourish.

Please remember that Jesus did not leave a five volume systematic theology for their easy reference; there was no “Starting a New Religion for Dummies.” The first Christians, led by bumbling and doubt-filled disciples, struggled to build a community within their Jewish tradition that reflected what they’d experienced through life-transforming relationship with Jesus Christ. 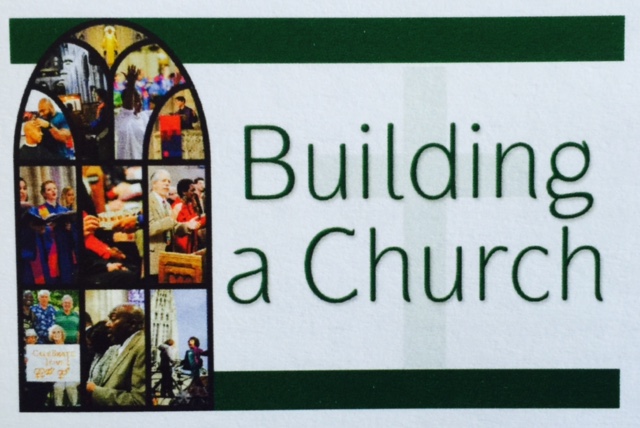 Two thousand years later, we know that they were successful in their efforts at building a church, because it’s now we—modern disciples of Jesus—who are tasked with continuing the ongoing evolution of the church of Jesus Christ, of asking how we might build the kind of community from which that transformational gospel might change the world, right here, right now.

It might seem silly for us to be talking about building a church—after all, John Rockefeller handled that quite nicely for us almost eighty-five years ago. But the true heart of a faith community is found in the lives we live individually and relationships we nurture collectively, not just this beautiful building around us.

So as we continue to witness the external building project taking place right here up in the front of the nave as we restore the apse windows, it seems right that we consider what internal building blocks we might put in place as we think about the community God is calling us to be here, in this place, at The Riverside Church.

Why, you might be wondering, is it even worth our time to think about what we do and who we are here, as the church?

Some would say that church is becoming less and less important in our increasingly secular society. One in five Americans would call themselves a “none,” meaning they answer “none” on surveys asking for religious affiliation. But incredible sociologist of religion from Boston University, Nancy Ammerman, begs to differ. She says that, even with these shifts in culture, the health of local congregations is more important than ever.

Her research shows: “Congregations and their community partners are…critical players in the increasingly frayed safety net that protects the most vulnerable. They not only provide services, but they also mobilize advocacy and model what it means to take care of one another for the common good. People who participate [in congregations] give more, vote more, volunteer more. Congregations also [model] and [pass] along traditions of virtue that are critical to our larger culture. They are…the places where people are invited into an experience of transcendence and a relationship with the divine…”.[1]

Building a church that embodies the gospel, that makes it real in the world is important work for us, for our community, for the larger world.

And so, as we follow along with the story of the first disciples, we’re looking for qualities of healthy gospel community they exhibited—hints for how we might build a church in the way of Jesus.

Last week we heard the story of Peter and John healing a lame man outside the temple gates and inviting the people who stared in wonder to change their minds—to look at life through the lens of resurrection and consider that a new reality might be possible. It seems that Peter and the first disciples were convinced: any church that reflects a gospel reality will have to be a community of people willing to change their minds, to move and grow and change with the leadership of God’s Spirit.

It seems that the crowd was taken by Peter’s sermon on repentance, and a whole group of folks signed on to become part of the church they were building. This, as you might imagine, made the leaders of the temple really nervous. Really nervous, as any group in power might be when they sense power shifting. In today’s passage the leaders of the temple—and not just any leaders, the High Priest himself—have thrown Peter and John in jail and begun a special investigation of their trouble-making activities. In today’s passage, Peter and John are called in to answer to the leaders of the temple who want to know: “By what power have you done this?” Not really: how did you heal the lame man we’ve seen begging at the temple gates for years, but more like, “Who are you? What are you about?”

And it’s in this exchange that we can observe another important quality of the kind of community that reflects the message Jesus came to teach us: healthy communities have to know who we are. Somehow Peter and John knew that they had to be very clear about who they were and what they represented, or they would never be able to create a community by which the gospel could change the world.

I took a leadership class once during which we spent part of one day in class writing “elevator speeches.” An elevator speech is, our professor told us, a 45-second speech that encapsulates the essence of the communities we serve. Like, if someone got on the elevator and said: “Tell me about your church . . .”, you’d be able to communicate a concise message of identity before you got off the elevator.

(Of course, if you were riding on the elevators in The Riverside Church tower, you might have a little more time than 45 seconds…).

This exercise is a lot harder than it sounds.

Many of you have invested years of your lives in this community of faith; even with just 10 months under my belt, I’ve already had so many experiences of life in this place: babies dedicated, church council meetings, incredible worship, moments of heartbreak and joy. There have also already been some very funny moments as well!

How on earth do you communicate the depth and richness, the identity of this community in 45 seconds?

Of course you never can, fully. Never. But people ask me that question all the time: tell me about your church. And, to even begin to communicate how wonderful this congregation is, what a place of healing and hope this community creates for so many, what a uniquely unusual conglomeration of people this church gathers together, and what a rich and rewarding faith experience we can have here with each other, I’ve got to come up with something—we’ve got to come up with something, some kind of elevator speech that communicates the essence of all these things we know to be true about this community of Christ.

And that’s just what Peter and John did when they were questioned by the temple leaders. “By what power did you do this?”… or, “Who are you and what are you about?”

With a concise boldness we’d never expect from Peter, the same disciple who’d denied Jesus just a short time before, they declared who they were, followers of Jesus Christ, people whose lives had been changed by the reality of resurrection and who meant to build a community that reflected that healing and hope.

They knew who they were.

And who are we? Do we know who we are?

To build a vital community of faith we’re going to have to be very clear about who we are, and let’s just be frankly honest right now: definitive statements about who we are, are hard for us more liberal/progressive types. We forget that clarity about who we are—followers of Jesus Christ—is not an exercise in excluding others or claiming superiority over folks who hold different beliefs. In fact, if we shy away from clear expressions of who we are, we cede the freeing, unifying, transforming power of the gospel to others who would use the name of Christ to shame and exclude. And we cannot do that. This was never the intention of Jesus, who opened wide the doors of welcome to anyone who believed in the radical law of love; we are determined that our community must be a reflection of that love.

There’s something so powerful about knowing who you are and not being afraid to say it out loud. When we know who we are together, we can live as a community in this world without fear—like the first disciples, who showed up and told their truth with boldness and clarity.

We are grieving today with the nation of Nepal, where so many lost their lives yesterday in a devastating earthquake. It seems right, then, that I’d planned to leave you today with a call to clarity and boldness about who we are, by sharing a poem from Bengali poet Rabindranath Tagore, from Nepal’s neighboring country of Bangladesh:

Where knowledge is free

Where the world has not been broken up into fragments

Where words come out from the depth of truth

Where tireless striving stretches its arms toward perfection

Where the clear stream of reason has not lost its way

Into the dreary desert sand of dead habit

Where the mind is led forward by thee

Into ever-widening thought and action

Into that heaven of freedom, my Father, let my country awake.[2]

Here at The Riverside Church we say we are the community of Christ that that welcomes God’s heavenly banquet where all are loved and blessed.

I think with just a little practice, you and I could make that a very bold and powerful affirmation of the church we are building here in this place.

Either on the elevator…or off.

May 6, 2015 Poetry Corner
Recent Comments
3 Comments | Leave a Comment
"Any updates with the blog ?"
Stanley Sabbath as Radical Witness
"I really, really, really liked this article. Thank you. ♥"
maguilar9855 When God Gets Political: Enough
"To the author/researcher: I am wondering if you uncovered a time when, as Dr. King ..."
Judith March Hardie MLK at The Riverside Church in ..."
"Church is boring."
Ivan T. Errible Sabbath as Relationship
Browse Our Archives
Related posts from Talk with the Preacher