At the Intersection of Climate, Race & Poverty

At the Intersection of Climate, Race & Poverty May 8, 2016 Amy Butler

This is the second in a series of 3 posts that are part of an on going conversation at The Riverside Church on how the whole church is called to do the work of justice and building beloved community.  These posts were inspired by a public discussion called #TrendingAtTRC I held with Beth Ackerman, Head of Riverside’s creation care ministry Beloved Earth, and Lisa Hinds Salmon, Chair of our Finance Committee.  Too often the finances of a church and its social justice ministries are viewed as completely separate.  But we know that churches most fully live into their mission when everyone is contributing their passions and strengths toward the same goals.  I am grateful to Beth and Lisa for doing the challenging work of collaboration.  We know Riverside is not the only church exploring these questions and hope these conversations are helpful to others.

In the first post we explored what we mean when we talk about “divestment” as a social justice tool.  The questions for this post are:  Are climate change, racism, and poverty really connected?  If so, why can’t the social justice ministry just take responsibility for responding to them, why should the whole church be involved?

As I mentioned in our #TrendingAtTRC conversation, I see all three of these areas of urgent injustice in our world inextricably connected.  The poorest populations in the world are the most affected by climate change; there’s no debating that fact, and those suffering most are women and children.[1]  Acting in meaningful ways to combat the effects of global warming impacts many other areas of justice-making integral to our shared call as a community of Christ.

We have weakened our witness by allowing ourselves to become separated from each other, defined by our own “pet issues.”  The sooner we understand the inextricable link between all of these issues and come together around a shared call for justice, the sooner we can act in meaningful and impactful ways and use our considerable platform to influence necessary and urgent change in the name of the One who calls us to radical love in all its expressions.  The call of God on our individual lives and on the life of the congregation of The Riverside Church demands nothing less than that—this is why we must keep working to become #OneRiverside.

Let’s take a scavenger hunt and look for some clues for the right direction Riverside can take as climate change creeps up on us.  Start with our mission statement.   We pledge “to foster responsible stewardship of all God’s creation. “   This could not be clearer: Riverside’s intention is to be involved responsibly towards preserving our awe-worthy gift – creation itself, bestowed by the creator.  We see in Genesis that humans have a special role.  So will we preserve? Or destroy?

One unfortunate mindset prevalent in America’s last 200 years of industrial growth is the one that says the earth doesn’t need to be protected, just go ahead and use it as we wish.  A similar mindset ignores or denigrates the worth of our fellow humans, and discrimination examples abound.

Connecting the two is Archbishop Desmond Tutu of South Africa, who says, “Climate change is a deeply moral issue.”  Apartheid, which Riverside was actively involved in addressing, finally came to an end after a long struggle, using economic tools to get the attention of the powers that be.  Looking at today’s struggle, how climate change is affecting Africans already, Tutu said in 2016, “People of conscience need to break their ties with corporations financing the injustice of climate change.”   He is advocating for using economic tools again, and for churches to divest from fossil fuels as a remedy for this moral issue.

Back to New York, in areas like the South Bronx, or the Brooklyn Navy Yard, which are in low-lying areas, extreme storms like Sandy can create a toxic stew from the chemicals stored there or even wipe out New York’s important food source, Hunt’s Point.  “Even though climate change will affect everyone, its impacts will not be evenly distributed,” said Eddie Bautista, executive director for NYC Environmental Justice Alliance.  “Our communities live at the nexus of so many inequities, all climate change does is add even more intense disproportionality in terms of our burdens.”

We’ve got to look at neighbors near and far as we decide what we stand for.  The seas are ready to climb- maybe beyond 6 feet in this century- if there are not some urgent changes.  Divestment from oil and gas is one tool to raise awareness of these issues and to say, collectively, we care about our human family, just as we care about our children and grandchildren.

Riversiders: we can make significant efforts as a well-known church.  We’ve done it before and we can do it again.   The time to weigh in with divestment as a moral stand is now.

The water crisis in Flint Michigan, we believe, demonstrates profoundly the interconnected nature of climate change, racism, and poverty. At the core of the issue is resource allocation. As the public sector has failed the people of Flint by redirecting resources away from one of life’s most basic human needs, so too must private capital step in now to serve these neglected communities … just as Jesus would. As these policy gaps (whether based on race or socioeconomic status) are identified, crusaders for justice like Riverside will show up on the frontlines of the battle everytime. 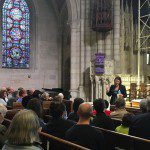 May 11, 2016 Building Beloved Community Together
Recent Comments
0 | Leave a Comment
"Any updates with the blog ?"
Stanley Sabbath as Radical Witness
"I really, really, really liked this article. Thank you. ♥"
maguilar9855 When God Gets Political: Enough
"To the author/researcher: I am wondering if you uncovered a time when, as Dr. King ..."
Judith March Hardie MLK at The Riverside Church in ..."
"Church is boring."
Ivan T. Errible Sabbath as Relationship
Browse Our Archives

Truth or Trump: Christians Must Decide...
EcoPreacher
Related posts from Talk with the Preacher