The End and the Beginning (Trinity Sunday)

The End and the Beginning (Trinity Sunday) June 11, 2017 Amy Butler

This may just be my favorite Bible verse of all time.

Recall that as they gathered up on the mountaintop that day, the disciples had been through three years of Jesus’ teaching and leadership, his arrest, the betrayal of some of their closest friends, and Jesus’ death, burial, and resurrection.

The way Matthew tells the resurrection story, the women were at the tomb that morning.  At the direction of an angel they ran to give the men a message to go meet Jesus…but on their way the women ran into Jesus himself.  Having seen the risen Christ, the women delivered the message that Jesus wanted to meet the disciples up on a mountaintop in Galilee, and that is exactly where we meet them in today’s gospel lesson.

Excited to see the risen Jesus and hoping that things would hurry up and get back to the way they had been before all the terrible events, you know that all the disciples could feel was swirling confusion, their broken hearts hoping for healing and their racing minds struggling to make sense of it all.  They could see Jesus there, in the flesh, resurrected, but it sounded like he was saying… goodbye, ending with a promise that nobody could make sense of: “And remember, I am with you always, even to the end of the age.”

Today is the Sunday that marks the end of this season after Easter and the beginning the longest period of the church calendar, a season called Ordinary Time…when the power of resurrection and the regular rhythms of the liturgy run right up against each other, when something ends and something new begins.  It’s Trinity Sunday, and doubt and confusion, actually, feel just right for today, when we are presented with a confusing and complicated doctrine of the church, the Doctrine of the Trinity.

Ever heard of the Doctrine of the Trinity?  If you have a simple explanation, I’d sure love to hear it.  I don’t; so instead you’ll have to endure an abbreviated systematic theology/church history lesson.

In short, here’s the Doctrine of the Trinity: God is three in one, but really one even though God is also three.

It would be good to note first that the word “trinity” does not occur anywhere in Holy Scripture, and there’s frankly not much in the Bible to help us define this three-but-one-ness of God.  Church history is pretty much the fullest context we have:

It was an early leader of the Church named Tertullian who actually invented the word “trinity” and the formula we’ve come to understand as our best bet for explaining: three persons, one substance.

But—and don’t let this shock you—before the Church leaders agreed on a Christian doctrine of the Trinity, everybody had to argue.  And argue and argue and argue, for hundreds of years, to even be able to articulate anything even resembling a unified expression of the idea, because right after Tertullian coined the word “trinity,” everybody got confused.  Who was first?  Who was last?  Who was better?  Who was human?  Who was divine? Here’s a quick summary of the good, the bad, and the ugly:

The first Ecumenical council of the Church—that’s a big, worldwide meeting—was held in 325 AD in Nicea.  The question up for debate was whether or not Jesus was divine, and in the end the Church affirmed Jesus’ divinity and wrote the Nicene Creed, you know: “We believe in one God, the Father Almighty, maker of heaven and earth….”

Then, about 50 years later in Constantinople, the gang got together again, this time to talk about the nature of Christ and the person of the Holy Spirit.  Some people were teaching that Jesus was totally divine and not human at all, but that argument ended at this meeting when Jesus was voted 100% human.  But then questions came up about the Holy Spirit, so they defined and affirmed the doctrine they’d already agreed to: three persons, one substance.

And . . . that settled that, until about 50 more years, in 431 AD, when the pendulum swung back and people were concerned that some were taking the “Christ as human” thing too far, forgetting that Jesus was, in fact, God.  So, they all decided at this meeting, the Council of Ephesus, that Jesus was, in addition to being 100% human, also 100% divine.

See why theologians are notoriously bad at math?

Well then, you guessed it, about 20 years later, in 451 AD, they all had to gather again, this time in Chalcedon, to argue about whether Jesus was, in fact, fully divine and fully human, or whether that assertion made him something else altogether.

And so it went.

Hundreds of years and many, many meetings and conferences and colloquiums and discussions ensued, and though the process sounds humorous now, believe me, it was no joke.  People were kicked out of the Church and labeled heretics.  Fancy theological words were created to define the essence of the different parts of the Trinity, and all of us were handed a doctrine that we can’t really define, defend, or even describe.

It’s just that it is so hard to put words and ideas around a mystery.

But God defies this constriction, and maybe Trinity Sunday is the best Sunday to just…say that out loud: God is a mystery.

Perhaps we don’t need to fully understand substance or order or even definition.  Maybe our work is to remember that God never stops showing up and reaching out to us, in as many ways as God needs to be real to us, promising to be with us even to the end of the age.

Sometimes God shows up in unpredictable, inexplicable, and confusing ways, like resurrection or Pentecost or Trinity.

And sometimes God shows up in the beauty of the ordinary: the waters of baptism, the gift and challenge of community, and even—maybe especially—in the moments when we doubt the most.

I read a wonderful article this week in the Los Angeles Book Review by Dorothy Fortenberry.  In it she talks about why she, a successful screenwriter in LA, takes her family to church every week.  She writes:

“’You don’t have to like it. You just have to go,’ I tell my five-year-old kid every Sunday when she complains about going to church. Every Sunday, even though she would prefer to stare at my smartphone, I make her go anyway.”

“Even though my smartphone is extremely wonderful.

Even though our religion — like all religions — has been responsible for terrible things.

Even though I often find the whole thing nutty and tacky, like a theme restaurant or the kind of museum you visit on a road trip.

Even though, when I was a kid and was similarly dragged by my mom, I was convinced — convinced — that I would never go again of my own free will.

“But church is not just about how I feel or whom I’m surrounded by. It’s about faith. This part is harder for me to explain.

…Long ago, people who were smarter than me and thought about it much longer than I have time to figured out what I’m supposed to believe…. Whether I actually believe all the stuff about Jesus and Mary and Light from Light, true God from true God varies. Most of the time, I do, I think. Sometimes I don’t….

[S]ometimes I wish I had the certainty of an atheist. I wish I could be positive that there was no God and that Sundays were for brunch. That dead people stayed dead and prayer was useless and Jesus was nothing more than a really great teacher.

Church isn’t an escape from the world. It’s a continuation of it. My family and I don’t go to church to deny the existence of the darkness. We to go to look so hard at the light that our eyes water.”

The places where we doubt, the places where we don’t know the answers but still show up to squint toward a tiny pinprick of light—these are what some theologians have called thin places.  These are places where the boundary between heaven and earth is especially thin, places where we can sense the divine more readily, where mystery and possibility meet, and where God visits us in our doubt.

Thin places,” the Celts call this space,
Both seen and unseen,
Where the door between this world
And the next is cracked open for a moment
And the light is not all on the other side.

Perhaps today, Trinity Sunday, is one of those places. Something is ending.  And something is beginning.  We are confronted with a doctrine that defies easy explanation and some of us doubt.

And God is here.

Today, sit with the mystery and discomfort of it all.  Feel heaven reaching toward you.  And remember the words of Jesus to all the hopeful but desperately doubting disciples who have gone before us: “Remember, I am with you always, even to the end of the age.” 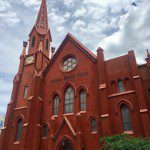 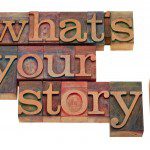 June 18, 2017 Hysterical
Recent Comments
0 | Leave a Comment
"Any updates with the blog ?"
Stanley Sabbath as Radical Witness
"I really, really, really liked this article. Thank you. ♥"
maguilar9855 When God Gets Political: Enough
"To the author/researcher: I am wondering if you uncovered a time when, as Dr. King ..."
Judith March Hardie MLK at The Riverside Church in ..."
"Church is boring."
Ivan T. Errible Sabbath as Relationship
Browse Our Archives

Hospitality in Zarephath
slacktivist
Related posts from Talk with the Preacher