The Church Must Lead in Talking About Sexual Harassment

Early in my first pastorate I found myself leading a church in the process of redevelopment. Because we worked, essentially, in a construction zone, offices were here, there, and everywhere depending on what work was being done where in the building. The senior minister’s study at the time was far away from the other administrative offices, upstairs in a little side room off the sanctuary. Most days it was quiet and peaceful, but occasionally I felt a bit isolated, then eventually vulnerable.

There was at the time a man in the congregation who began showing up unannounced in my office. The first time it happened, he startled me by appearing at the door with a gift: a women’s magazine article with tips for losing weight and looking sexier. When I expressed surprise, both at his sudden appearance and the “gift” he’d brought me, he did not seem to understand why I would be unnerved by the incident. It happened two times after that; once he brought me flowers and the other time some candy.

I finally called the chair of the board of trustees of the church and expressed my concern about the inappropriate nature of the man’s behavior. Then I asked the board chair to meet with the gentleman and me so that I could tell him clearly to stop appearing in my office unannounced and bringing me inappropriate gifts. After much pressure on my part, the board chair agreed to attend a meeting with me and the man who was acting inappropriately, and I explained the boundaries I expected him to follow: no more showing up unannounced at my office, and no more gifts. We all signed a statement indicating we shared clarity around the results of the meeting. And then the church member left.

The board chair then turned to me and said, “Well, I thought that went well. And isn’t it nice that he got dressed up for this occasion. Wore a tie and cologne, even! You should feel flattered.”

I’ve been reflecting on that experience these past few weeks as news of sexual predators dominate the airways. I think it was in the experience that I recounted above that I learned the church leadership version of a lesson I’ve internalized my whole life: men are just like that; put your head down and take it; don’t whine; a man thinks you’re attractive — go you! While no one told me outright that pressing the matter further would impact my career, on some level I knew it. So I didn’t challenge the board chair. And I smiled politely. And I took one for the team. And I did not feel flattered by the tie and the cologne.

While current events are turning another spotlight on the experiences of women in the workplace and in the world, there is nothing revelatory or shocking or new about Harvey Weinstein or Michael Oreskes or any number of other men publicly accused of sexually harassing women and others. But nobody is talking about when it happens in the church. I’m not talking about the regular cycle of news stories or rumors about pastors molesting children or having affairs. I’m talking about the persistent, wearying presence of sexism and misogyny in our churches.

Of course, it shouldn’t shock anyone that this happens every day in churches. What should outrage everyone is why the church isn’t a leader in calling out this kind of behavior and making sure that it never happens in the communal life of the church, a sanctuary.

I don’t feel quite as vulnerable to losing my career as I did when I was first starting out, but sexual harassment, threatening comments, and inappropriate behavior continue with shocking regularity. And it’s appalling. It’s appalling that I would still feel the need to put my head down and just take it. And it’s appalling that the church would be a place where women are victimized on a regular basis in this way (or any other).

I’m sorry I haven’t called it out more often. I’m sorry that somewhere along the line I learned it was just something I had to endure. I’m sorry because I’m complicit in creating a world I never want my daughter to live in. And I have, by my silence, conveyed the message that this kind of behavior is acceptable in general, and even in the church of Jesus Christ.

But that’s over now. I will not tolerate harassing, intimidating, threatening, or destructive behavior directed personally at me, directed at any member of my staff or congregation, or existing in any form in an institution to which I belong or in which I exercise leadership. Maybe I couldn’t say it before; I know there are a lot of women who cannot talk about the constant sexual harassment they experience at church. But I can say it now, and I sure as hell will not stop. 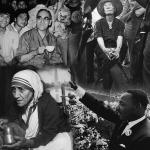 November 19, 2017 How Should the Church Talk About Money?
Recent Comments
0 | Leave a Comment
Browse Our Archives
Related posts from Talk with the Preacher