Simple Gifts: I Will Sing The beautiful words of today’s gospel are Mary’s Song, The Magnificat, a young girl’s treatise about the state of the world and her stubborn insistence that it doesn’t have to stay that way.  But even with the haunting notes of a beautiful song of expectation ringing in our ears, we cannot forget the pain and desperation into which that young, timid voice defiantly sang.

She was a young teenager, as Roy Moore’s campaign reminded us last week, as if the desperate plight of a scared teenager is a reality sanctioned by God.  It is not.  In fact, it’s hard to think of someone MORE vulnerable and afraid than Mary must have been.  You’ll recall, as the story goes, an angel came to a young, unmarried woman and told her she would give birth to a baby.  The young teenager in question lived in a culture oppressed by Roman rule and held together by strict social and cultural rules in which women were like property.  A baby out of wedlock rendered a woman damaged goods; her life was ruined.

It was into this context that Luke’s writer has young Mary, pregnant and vulnerable, responding to her situation with a song, singing these beautiful words: “…the Mighty One has done great things for me, and holy is his name…he has brought down the powerful from their thrones, and lifted up the lowly; he has filled the hungry with good things, and sent the rich away empty….”

And sing she did.  These beautiful, subversive claims, sung defiantly and in the past tense as if to say: “Even in the middle of all of this pain, I already know what God is up to. I defiantly claim joy—God has already redeemed even the darkest pain of my life.  You feel sorry for me?  Don’t, because God has scattered the proud, brought the powerful down from their thrones, filled the hungry with good things, and kept his promise.  God has already done it.  And God will do it again.”

Today we’re in week three of Advent, the Sunday of joy.  Our Simple Gift for this week is music, a powerful force that marks moments for us, that soothes our troubled spirits, and that gives us courage and hope in the most desperate moments.  We hear and sing some of the most beautiful music of the entire year during these weeks, in fact.  And we sing it to call forth hope, peace, joy, love: things we believe about our lives, things for which we desperately long, in a world full of discordant notes and competing sounds: desperation alternating for hope; broken relationships and conflict drowning out peace; sorrow and grief swallowing up joy.

What song brings you joy?  Gives you courage? How can you, how can I, look at our own lives, our own world, so often scored with minor notes of fear, desperation, uncertainty, devastation even, and find the courage to do what Mary did: sing a song of liberation and freedom, of righting old, old wrongs, of bringing life and healing and hope into a situation—into a world—where these qualities are not readily apparent?

We have to find a way, because this is joy. Not sugary, smiley, everything-is-just-great giddiness, but an assurance in the middle of pain and desperation we will sing.  I will sing.

On this earth, struggling for breath and dying one degree at a time, what can we possibly do to protest?  We will sing.

In a country where there have been at least 1,576 mass shootings since almost exactly five years ago, when a gunman walked into Sandy Hook Elementary School and killed 20 children, six adults, and himself, and we pretended to be outraged but still have done little of substance to address gun violence, what will we do?  We will sing.

And what will we do in the face of a corrupt government that hands us a Trump-approved score?  Well, of course we will sing, sing words our government has banned: science-based, vulnerable, entitlement, diversity, transgender, fetus, evidence-based, words that tell a truth we must have the courage to proclaim.  We will sing.

And when our voices are stifled and the party line tries to drown out the truth with lies that tell us wrong is really right, and the status quo is just fine, and the people who walk in great darkness are just exaggerating…we will sing.

This is the radical act of Advent.  Of joy: We. Will Sing.

As some of you know, I lived for a few years in Prague in the early 1990s, right after the Velvet Revolution when the country became the Czech Republic.  Even in the most oppressive times had been one of the most vibrant cultural and musical centers of Europe, where many, many talented musicians, composers, conductors, and artists lived, worked, and created beauty.  Near the village where I lived, just outside the city of Prague, there was a museum on the grounds of what once was a concentration camp called Terezin.  The camp was built as a way station for prisoners from Prague and surrounding areas, to keep them until they could be shipped off to the gas chambers at Auschwitz.  Many Jews who were imprisoned in Terezin were world-class musicians and composers; the rest were largely very accomplished amateur musicians.  One by one they arrived and then they left, some smuggling instruments and others carrying only enough defiance to face their fears. All around them there was desperation, hunger, sorrow, fear, pain, loss of dignity, death.

Among the prisoners at Terezin was celebrated young conductor, Rafael Schächter, who found himself in possession of one score—only one—of the intensely complex and beautiful Catholic funeral mass, Verdi’s Requiem.  And so Schächter decided to teach and perform Verdi’s Requiem with a variety of smuggled instruments and an ever-changing chorus.  And they did; they sang.  The community at Terezin tirelessly rehearsed and performed the requiem more than fifteen times.

Historians marvel at the determination of Schächter, who kept rehearsing and performing even after Nazi transports decimated his choir and orchestra over and over.  And people wondered why a group of Jews would choose to create and perform liturgy of the Catholic church, a symbol of those who were oppressing them.(Click here to read more about this amazing story.) But those who were there—those who remember—call it the “Defiant Requiem.”  In the face of desperation, injustice, hopelessness, death, they raised their batons and bows and voices and sang the ancient words: “deliver the souls of all the faithful dead from the pains of hell and from the deep pit; deliver them from the mouth of the lion; that hell may not swallow them, and that they may not fall into darkness…Lord have mercy, Christ have mercy, Lord have mercy.”

Catholic University historian Murry Sidlin said: “I could see that almost every line of the Mass could have a different meaning as a prisoner. ‘Deliver me O Lord’ for them meant liberation. Nothing remaining unavenged was certainty of punishment for their captors,” he said. When Sidlin checked with the survivors they told him that their conductor, Schächter, told every chorus: ‘We will sing to the Nazis what we cannot say.’ This was their way of fighting back, their form of resistance, defiance.”

The same is true for us.

The work of practicing Advent joy in the face of sorrow and devastation takes doing what Mary did: naming the horror and pain and brokenness in which we find ourselves and declaring that God has already fixed it; that there is a reality for which we long already in place, and we will choose to live into that reality.

This is true joy: the unwavering insistence that God has already done what we cannot manage to do on our own, and we will celebrate that. We will not keep silent.  We will sing with Mary, “For the Mighty One has done great things for me, and holy is his name!” 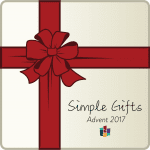 December 24, 2017 Simple Gifts: When a Letter is Not Enough
Recent Comments
0 | Leave a Comment
"Any updates with the blog ?"
Stanley Sabbath as Radical Witness
"I really, really, really liked this article. Thank you. ♥"
maguilar9855 When God Gets Political: Enough
"To the author/researcher: I am wondering if you uncovered a time when, as Dr. King ..."
Judith March Hardie MLK at The Riverside Church in ..."
"Church is boring."
Ivan T. Errible Sabbath as Relationship
Browse Our Archives

How a Plague Exposed the "Christian...
Honest to God
Related posts from Talk with the Preacher