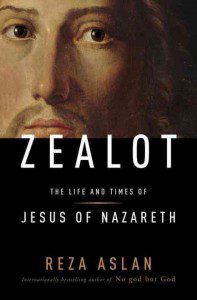 Reza Aslan begins of his book, Zealot: The Life and Times of Jesus of Nazareth, with a prescient warning: “Scholars tend to see the Jesus they want to see. Too often they see themselves—their own reflection—in the image of Jesus they have constructed” (xxxi).

I don’t think Aslan had himself in mind when wrote that statement, but you should be warned: the Jesus in Zealot is Aslan’s own false construction.

His central thesis is that the Jesus of history, and the God Jesus believed in, demanded violence in the face of political and religious oppression. Here’s one of the relevant passages:

[F]or those seeking the simple Jewish peasant and charismatic preacher who lived in Palestine two thousand years ago, there is nothing more important than this one undeniable truth: the same God whom the Bible calls a “man of war”(Exodus 15:3), the God who repeatedly command the wholesale slaughter of every foreign man, woman, and child who occupies the land of the Jews, the “blood spattered God” of Abraham, and Moses, and Jacob, and Joshua (Isaiah 63:3) the God who “shatters the heads of his enemies,” bids his warriors to bathe their feet in their blood and leave their corpses to be eaten by dogs (Psalm 68:21-23)—that is the only God that Jesus knew and the sole God that he worshipped. (122, emphasis in the original.)

The problem that I have with this passage is indicative of the problem that I have with the way Aslan constructs his Jesus. He constantly picks and chooses which verses from the Bible he uses to support his claim that Jesus was a warrior messiah whose goal was to violently overthrow the Roman and religious establishment. He peels away all passages that conflict with his construction so that he can show us what Jesus was truly like.

What Is the Greatest Commandment? And Who Is My Neighbor?

As Michael Hardin points out in his book The Jesus Driven Life, (and if there is one book you should read about the historical Jesus this year, it is The Jesus Driven Life) when Jesus gained popularity, some of his rivals tried to test him with a question about interpretation. “Teacher,” a lawyer asked, “which commandment in the law is the greatest?” This is a crucial moment in the life of Jesus, because, as Hardin states, “At stake in this conversation is how one interprets the Jewish Scriptures and how one lives out that interpretation” (37). Aslan’s Jesus would have responded as a man of war, “Shatter the heads of your political and religious enemies! Kill them! Set yourselves free from your oppressors!”

To be honest, I would have loved for Jesus to have said that. Deep down, I want Aslan’s violent God because I can control that God. I know that that God is for me and against my enemies. The problem is that Jesus didn’t quote anything in the Scriptures about a violent God to describe the greatest commandment. Instead, he referred to love. “You shall love the Lord your God with all of your heart, and with all your soul, and with all your mind…And a second is like it: ‘You shall love your neighbor as yourself.’ On these two commandments hang the law and the prophets” (Matthew 22:34-40). So, according to Jesus, the law and the prophets are there to guide us in loving our neighbors, who we know from Matthew chapter five include even our enemies: “You have heard that it was said, ‘Love your neighbor and hate your enemy.’ But I say to you, love your enemies and pray for those who persecute you.”

Of curse, Aslan never quotes Jesus specifically saying, “pray for those who persecute you” because it doesn’t fit with Aslan’s construction of zealously violent Jesus.

Aslan explains away passage like “Love your neighbor/enemy” by claiming that Jesus meant his Judean audience should only love their Judean neighbor. Oddly, he does refer to the story of the Good Samaritan to show that Jesus critiqued the religious authorities, but Jesus told this parable in response to the question, “Who is my neighbor?” The point, of course, is that the Samaritan is the one who proves to be the neighbor by showing love to the man in need. Here, Jesus is expanding his followers’ understanding of neighbor. To many of his hearers, a Samaritan was a political and religious rival. In fact, Josephus reported that Judeans and Samaritans had many violent confrontations throughout the first century. The story of the Good Samaritan was Jesus’ narrative way of expanding our understanding of “neighbor” so that our love for neighbor embraces everyone, including our national enemies.

According to Aslan, Jesus was zealous like the prophet Elijah. He says that Elijah was, “A fearsome and uncompromising warrior for Yahweh…[who] strove to root out the Canaanite god Baal among the Israelites” (128-129). Famously, Elijah challenged 150 priests of Baal to a contest. Two altars with offerings were constructed. The priests of Baal would pray that Baal would consume their offering with fire and Elijah would pray the same to Yahweh. The priests of Ball fervently prayed day and night, but nothing happened. Then it was Elijah’s turn. The first time he prayed to Yahweh a great ball of fire fell from heaven and consumed the offering and the altar. Then, in the ultimate act of “My God is bigger than your God!” Elijah seized and slaughtered all 150 priests, because, as Aslan avers, “he was ‘zealous’ for the Lord God Almighty’” (129, quoting 1 Kings 19:10).

Connecting that story from Elijah to Jesus is fallacious. After all, the closest comparative story in the Gospels is found in Luke 9:51-56. When Jesus sent messengers to the Samaritans, the Samaritans refused to welcome them. When the disciples James and John saw this, they said to Jesus, “Lord, do you want us to command fire to come down from heaven and consume them?” The parallel to Elijah is obvious, made even more so by the fact that many ancient manuscripts end the question with, “as Elijah did?” (See New Interpreter’s Study Bible, 1873.) The disciples, like Aslan, expected Jesus to be zealous like Elijah was zealous. But Jesus had the same response whenever his disciples desired violence. As Luke says, Jesus “turned and rebuked them. Then they went on to another village.” Again, Aslan never mentions this story, because it is a counter-narrative to the Elijah and Baal story, and it challenges any notion of a violent Jesus.

Those Who Live By the Sword Die By the…Oh Right…

Aslan’s retelling of the events at the Garden of Gethsemane is egregious beyond measure. He states that Jesus commanded his disciples to bring swords because he knew a fight would break out. After all, according to Aslan, “Jesus was no fool. He understood what every other claimant to the mantle of the messiah understood: God’s sovereignty could not be established except through force” (122). And so as Jesus was arrested in the garden, his disciples looked on, and, as Aslan recounts the story, “One of them draws his sword and a brief melee ensues in which a servant of the high priest is injured” (146). The impression that Aslan provides is that Jesus wanted his disciple to respond with violence. Of course, he never quotes Jesus rebuking his errant disciple, “Put your sword back into its place; for all who take the sword will perish by the sword” (26:52), nor does he quote Luke’s version of Jesus’ arrest, “Then one of them struck the slave of the high priest and cut off his right ear. But Jesus said, ‘No more of this!’ And he touched his ear and healed him” (22:50-51).

It turns out that Jesus was no fool. He knew that those who live by the sword die by the sword, that violence only breeds more violence, and that the best way to respond to violence is to say “No more of this!”

Resurrected for Vengeance or Peace?

As I continued to read Zealot, one question kept nagging me. Aslan frequently mentions that there were numerous failed messiah’s during the first century, who all attempted a violent revolution against Rome. If Aslan is right in his assertion that Jesus was a failed violent revolutionary messiah just like the others, then why were his disciples the only ones who continued to believe in their Messiah’s cause? Aslan answers this question by claiming the disciples were reinvigorated by the resurrection, because Jesus’ “resurrection confirmed his status as messiah” (165).

The interesting thing about Aslan using the resurrection to support this claim is that he never references a resurrection story. Of course, that’s because all the resurrection stories undermine his claim that Jesus was a violent revolutionary. Aslan’s Jesus would be resurrected for the purpose of vengeance. But the resurrected Jesus has nothing to do with vengeance, but everything to do with peace. The resurrected Jesus speaks to Mary in a garden, enters a closed room full of the very disciples who abandoned him in his time of need, and talks with two disciples on the road to Emmaus. He never says, “Okay guys. This time I’ve got some serious powers. It’s time for vengeance!” Rather, he says, “Peace be with you.”

And then Jesus sent his disciples, as he sends us, into the world to offer that peace to everyone. It’s a peace that has nothing to do with violence, but everything to do with nonviolent love.

(For more on Aslan, click here to read my colleague Suzanne Ross’s reflection on his interview with Fox News.)

(Much of this article is influenced by Michael Hardin’s book The Jesus Driven Life: Reconnecting Humanity with Jesus and James Alison’s adult education book and video series Jesus the Forgiving Victim: Listening to the Unheard Voice.)

April 21, 2014 Book Review: Why Did Jesus, Moses, the Buddha, and Muhammad Cross the Road?
Recent Comments
0 | Leave a Comment
Browse Our Archives
Follow Us!