Israel is completing a missile defense system known as “David’s Sling.” It is designed to shoot down rocket fire originating from Gaza, Lebanon, and Iran.

I don’t want to get bogged down in a discussion about Israel’s right to defend itself. What I want to do is explore the biblical reference to “David’s Sling” and what it might mean for us. The name is an obvious allusion to the story of David’s victory over Goliath. It’s a favorite biblical story for many Sunday school teachers, but a conundrum for those teachers who take mimetic theory seriously. Mimetic theory claims that violence belongs to humans, not to God. It also states that the bible progressively reveals this message about violence to us. And yet, the connection between God and violence permeates the bible, with God apparently sanctioning violence against God’s enemies. So we rightly ask, “What about all the violence in the bible?”

If we stick with the biblical stories long enough, we will discover that they critique violence.  The story of David and Goliath is the perfect example of this. You can read the whole story in 1 Samuel 17-31. Chapter 17 reports that the Israelites and the Philistines assembled their armies for battle. For 40 days, Goliath, the hero of the Philistines, mocked the Israelites and challenged them to send their own hero to decide the battle in one on one combat.  Goliath was an intimidating figure of legendary stature. Tradition claims that his armor weighed 60 tons and that his sword had “magnificent” powers. Israel couldn’t find a hero brave enough to challenge Goliath, until the young David came bearing food for his brothers serving in the army. The precocious David accepted the challenge. Saul, the king of Israel, offered David his armor, at which point David said, “Armor. Armor! I don’t need no stinking armor!”

Okay. I totally made that up. But David was a hard core hero. And hard core heroes don’t need armor. All they need is a staff, a sling, and a few rocks.

David and Goliath came face to face and they began a little religious trash talking:

Goliath: Am I a dog that you come at me with sticks?

(Then Goliath “cursed David by his gods.” Presumably, this was the first time in history when someone stuck out his tongue and yelled, “My gods are better than yours!”)

Goliath: Come to me and I will give your flesh to the birds of the air and to the wild animals of the field.

In good mimetic fashion, David repeated much of what Goliath said, only he escalated the religious trash talking:

David:  You come to me with sword and spear and javelin; but I come to you in the name of the Lord of hosts, the God of the armies of Israel, whom you have defied. This very day the Lord will deliver you into my hand, and I will strike you down and cut off your head; and I will give the dead bodies of the Philistine army this very day to the birds of air and to the wild animals of the earth, so that all the earth may know that there is a God in Israel, and that all this assembly may know that the Lord does not save by sword and spear; for the battle is the Lord’s and he will give you into our hands!

Well, every second grader knows what happened next. David killed Goliath and, since we usually stop telling the story at chapter 17, we all cheer that God is on our side. We are assured that God sanctions our violence because we are the good guys and our enemies are evil. We can all rest tonight knowing that good always conquers evil. Yay David. Yay God.

But then we read chapters 18-31 and we discover that this story is much more interesting and complicated than what we learned in Sunday school. The truth that this story offers is the same truth that mimetic theory offers – that violence is supremely mimetic, or imitative. As René Girard pointed out in his book Violence and the Sacred, “… evil and the violent measures taken to combat evil are essentially the same” (37). Girard claims that violence makes us enemy twins as it washes away all distinctions between “us” and “them.” If that’s true, then David and Goliath are essentially the same. This is the warning about violence that the story provides – if only we continue reading!

We’ve already seen the beginning of this warning as David and Goliath taunt one another. Goliath says he will feed David to the birds and the animals. David imitates that taunt, and in good mimetic fashion escalates it further – “I will give the dead bodies of the Philistine army … to the birds of the air and to the wild animals of the earth.”

At least Goliath was only going to feed one person to the birds and animals.

After David defeated Goliath with his sling, he “stood over the Philistine; he grasped his sword, drew it out of its sheath, and killed him; then he cut off his head with it.” David then presented Goliath’s head and sword to Saul. David, who previously rejected Saul’s armor, kept Goliath’s armor for himself, taking it to his own tent. When Saul’s army came home, the women of Israel celebrated by dancing and singing, “Saul has killed his thousands, and David his ten thousands.” Saul became jealous and tried to kill David. The hero who killed Goliath now ran for his life.

In chapter 21 we discover that David fled to a priest named Ahimelech to ask for food. A servant of Saul’s was nearby and David didn’t have a weapon to defend himself. Apparently David no longer trusted the “Lord who does not save by sword or spear.” So he asked Ahimelech for a weapon and the priest provided one , saying, “The sword of Goliath the Philistine, whom you killed in the valley of Elah, is here wrapped in cloth behind the ephod; if you will take that, take it, for there is none here except that one.” David was excited to be reunited with Goliath’s powerful sword, exclaiming, “There is none like it; give it to me!”

David is beginning to look a lot like Goliath. The armor and sword of Goliath became the armor and sword of David. But if that’s not enough to convince you that the bible is offering a warning that violence makes us just like our enemies, the story gets even more interesting. David continues to flee from Saul and in chapter 27 says, “There is nothing better for me than to escape to the land of the Philistines.” David was persecuted by his fellow Israelites, and found solace with his former enemies, the Philistines. David lived in a Philistine city called Gath, which is extremely significant detail of the story because Goliath was from Gath.

Goliath of Gath. David of Gath.

You begin to wonder what the biblical author was up to. If you were telling a story about the most important hero of our religious tradition and how God was on his side, wouldn’t you omit some of these details? But there’s more: In chapters 27 and 28 David met the Philistine king Achish. They quickly became trusted friends. Soon, Achish went to war with Israel. You might think that this would put David in a moral dilemma. Should he fight with the Philistines, or run back to Israel? Achish said to his trusted friend David, “You know, of course, that you … are to go out with me in the army.” David replied, “Very well. Then you should know what your servant can do.” Achish knew exactly what his servant David could do, so he responded to his loyal and powerful friend, “Very well. I will make you my body guard for life.”

David, of course, went back to Israel and became Israel’s greatest king, but he could never free himself from violence. The story of David and Goliath provides the anthropological warning that violence makes us just like our enemies, but it reveals something about God, too. It provides a theological critique of violence. David planned to build the Temple where God would reside, but God had other plans. God said to David, “You shall not build a house in my name, for you are a warrior and have shed blood.” 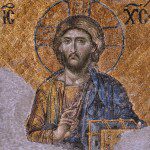 The problem that the Bible seeks to solve is the problem of violence and bloodshed. God doesn’t desire violence; we do. This theological message begins in the Old Testament and culminates in Jesus. Jesus was formed by his Jewish tradition and took the theological and anthropological critique of violence to its conclusion. He never imitated his persecutors; rather, he offered the only alternative to violence, which is forgiveness. As the theologian James Alison says in his Forgiving Victim course, Jesus reveals what it means to be truly human and truly God through his all embracing love and forgiveness.

Which brings me back to “David’s Sling.” I realize that it is easy for me to critique Israel’s missile defense system. Nobody is threatening my city with bombs. But if we think the story about David’s sling justifies violence against our enemies, we miss the point of the biblical story. The bible warns that verbal and physical violence make us just like our enemies. As Jesus the Jew reveals, the only way out of the mimetic cycle of violence is not through more violence, but through forgiveness. That message matters beyond national politics. It matters in our daily relationships with family members, neighbors, and co-workers. It matters in the line at the grocery store and it matters at business meetings. It matters because in our national lives and our personal lives forgiveness and the hope for reconciliation is the only path to true peace.

August 6, 2014
A Defense of the Passive Voice
Next Post

August 13, 2014 Sharing Space with God: A Possible Return to Eden
Recent Comments
0 | Leave a Comment
"Church is boring."
Ivan T. Errible The Poor Own The Kingdom — ..."
"" … and the Word became Flesh." That "Word made Flesh" is Jesus Christ.Furthermore, if ..."
Ocelot Aardvark Why You Should Run from “Bible ..."
"nice article."
Brandon Roberts The Gospel is Countercultural: Politics, Palestine, ..."
"What cave do you live in?"
Monday's Child The Left Hand of God – ..."
Browse Our Archives
Follow Us!