Ishtar vs. Easter: Pick Your Story

In the midst of my family’s Easter celebration yesterday, I decided to check Facebook. Most of my friends posted comments like “Happy Easter!” and shared pictures of their celebrations.

But this meme also appeared on my feed: 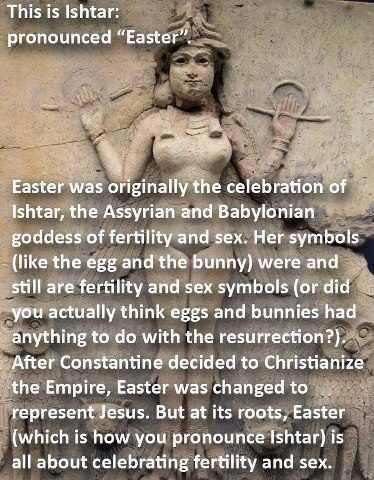 The meme is attributed to Richard Dawkins’ Foundation for Reason and Science and is meant to debunk Christianity and Easter as just another example of an ancient myth. The reasoning goes like this – Christianity has so much in common with other ancient myths, so how can we take Christianity seriously?

The meme shows the ancient Assyrian and Babylonian goddess Ishtar and makes a few claims against Christianity. The first is that “Ishtar” was pronounced “Easter.” The second is that Ishtar was the goddess of fertility and sex and so her symbols were an egg and bunny. The meme concludes that Easter is merely a copy of the Ishtar myth and its roots are “all about celebrating fertility and sex.”

Megan McArdle of the Daily Beast did an excellent job debunking the meme. First, she points out that the English word “Easter” isn’t related to an ancient Middle Eastern goddess, but rather to a Germanic goddess named Eostre or Ostara. This was the goddess of the dawn, who brought light to the people. McArdle also observes that other European languages don’t use the word “Easter” at all. Instead, they call the day of the resurrection “Pascha,” which comes from the Hebrew word “Pesach,” meaning “Passover.”

For argument’s sake, I’m willing to concede that while the meme’s comparison of Ishtar to Easter is problematic, there are some interesting similarities between the goddess Ishtar and the Easter story. But what I find really interesting are the differences.

Since the meme brought it up, let’s compare the Ishtar myth to the Easter story. First, I’d like to tell you about my guide when it comes to understanding ancient myths, René Girard. In his book, I See Satan Fall Like Lightning, Girard claims that the Gospels and ancient myths have a lot in common. They are both structured around what he calls a “mimetic crisis.” For our purpose here, “mimetic crisis” basically means a cycle of violence. Ancient myths and the Gospels are similar in that they both have violence in them. But that similarity only heightens the fact that they deal with that violence in radically different ways. Let’s first take a look at how the Ishtar myth deals with violence.

Ishtar was the goddess of sexuality, love, fertility, storms, and war. She had many lovers and a violent streak. Don’t mess with Ishtar. This goddess gets her revenge! According to mythologist Felix Guirand, “Woe to him whom Ishtar has honoured! The fickle goddess treated her lovers cruelly, and the unhappy wretches usually paid dearly…Even for the gods Ishtar’s love was fatal. In her youth the goddess had loved Tammuz, god of the harvest,…This love caused the death of Tammuz.”

Ishtar proposed marriage to the Babylonian hero Gilgamesh, but he refused, citing the violent faith of her previous lovers. “And why should I marry you?” Gilgamesh asked the goddess. “You have harmed everyone you have ever loved!” Ishtar was enraged by his refusal and sought revenge by asking her Father, the god Anu, for special permission to use the Bull of Heaven as her secret weapon against Gilgamesh. Gilgamesh, that great warrior, killed the Bull. In a clear example of a mimetic crisis, Ishtar cursed Gilgamesh, then Gilgamesh cursed Ishtar. After they were done with their playground taunts, (I can hear my children teasing each other, “neener-neener-neener”) Ishtar got her revenge by killing Gilgamesh’s best friend. (Hopefully my children won’t do that!)

Ishtar is a god of violence and Gilgamesh is a man of violence. The ancient myths legitimate violence against women and against men. No one is spared from violence and revenge is taken for granted as a way of life.

Easter is an anti-myth. It de-legitimizes violence. As Girard observes, there’s no denying the violence in the story. Just a few days before Easter, Jesus was abandoned by his followers and executed at the hands of the Roman Empire and the religious authorities of his day. But as opposed to Ishtar who asked her Father for revenge, Jesus literally prayed his Father would forgive those who killed him. “Father,” Jesus prayed from the cross, “forgive them, for they know not what they do.”

On Easter, Jesus continued to reveal that mythical violence has no place in the heart of God. Jesus was resurrected to transform our world; to transform us. Because of the resurrection, we no longer have to believe in the mythical ways of violence. Instead, we can believe in the nonviolent love of God.

If Jesus were a myth like Ishtar, he would have come back for revenge. He would have killed his Roman persecutors and their religious allies. He probably would have murdered his cowardly disciples. But Easter is no myth. It’s Gospel. It’s the Good News that God doesn’t seek revenge, but rather offers forgiveness and peace to the world.

The Gospel of Matthew ends with the resurrected Jesus commissioning his disciples. “Go therefore and make disciples of all nations, baptizing them in the name of the Father and of the Son and of the Holy Spirit, and teaching them to obey everything that I have taught you. And remember, I am with you always, to the end of the age.”

What did Jesus teach his disciples? In his life, death, and resurrection, Jesus taught them the anti-myth. He taught them that the true God has nothing to do with violence, but everything to do with nonviolent love. He modeled for them an alternative way relating to their fellow human beings, not with mimetic cycles of violence, but with forgiveness and nonviolent love.

In the end, the Ishtar and Easter stories do have some things in common. They both offer strategies for dealing with violence. Those strategies are clear. Ishtar legitimizes a life of violence while Easter provides the alternative of forgiveness.

Which story will you pick?

April 3, 2015
A God Torn to Pieces: Good Friday, Nietzsche, and Sacrifice
Next Post

April 7, 2015 Scandal in Indiana: Will the Real Victim Please Stand Up?
Recent Comments
10 Comments | Leave a Comment
"Not going to happen until Christ returns."
Bob Shiloh How Forgiveness Can Transform Our Violence ..."
"MyNulled.in - Latest Premium Wordpress Themes, Wordpress Theme Nulled, Download Wordpress Theme Nulled, Download Latest ..."
Mynulled Children, Creation and Incarnation: The Neverending ..."
"Which leaves many in a quandary doesn't it. What to believe about a book that ..."
Bob Shiloh Why You Should Run from “Bible ..."
"agree"
barbara fulcher Why You Should Run from “Bible ..."
Browse Our Archives
Related posts from Teaching Nonviolent Atonement