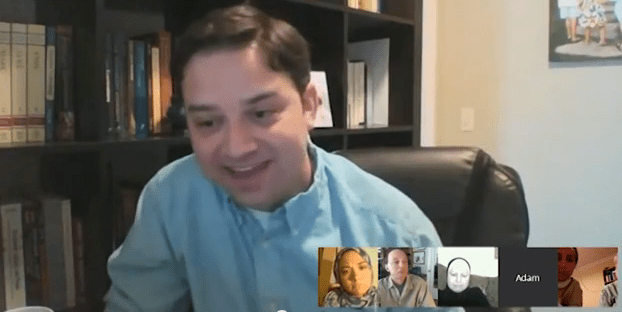 was delighted to be invited to an international discussion about creating more empathy between people of different religions. The panel consisted of a Christian (that was me!), an atheist, and three Muslims.

(You can watch the video by scrolling down.)

The producer of the panel was Edwin Rusch, who is the founding director for the Center for Building a Culture of Empathy. Edwin’s goal is to create “a worldwide culture of empathy and compassion.” Through articles and videos, the website explores the arts, sciences, religion, and much more.

Sheima Salam Summer brought the panel together. I was introduced to Sheima about a year ago through our mutual friend, Lindsey Paris-Lopez. Lindsey suggested that I read Sheima’s book How to Be a Happy Muslims. As I state in the video, it’s a wonderful book that has taught me to be a happier Christian. I’m grateful for Sheima’s friendship, her book, and her blogging at howtobeahappymuslim.com.

Our other panelists were my new Muslim friends Amal Damaj and Eric Abdulmonaim Merkt. Amal enjoys studying the Quran and discovering connections between some of its verses and modern research findings in science and sociology. Abdulmonaim is a Sufi Muslim. He has a master’s degree in religion and a degree in philosophy.

I brought René Girard and mimetic theory into the discussion. Although not always explicit, I soon discovered that the principles of mimetic theory were permeating our discussion. So, from the conversation, I decided to make a top 10 list of the ways that that mimetic theory can help foster empathy across our religious and atheist traditions:

We talked about so much more! I’d love to know if this discussion stirred up any comments or questions for you about empathy in relation to mimetic theory or interfaith dialogue. Please leave your comments below!

April 7, 2015
Scandal in Indiana: Will the Real Victim Please Stand Up?
Next Post

April 14, 2015 Monica Lewinsky and Jesus Christ: How to Overcome the Place of Shame
Recent Comments
0 | Leave a Comment
Browse Our Archives
Follow Us!