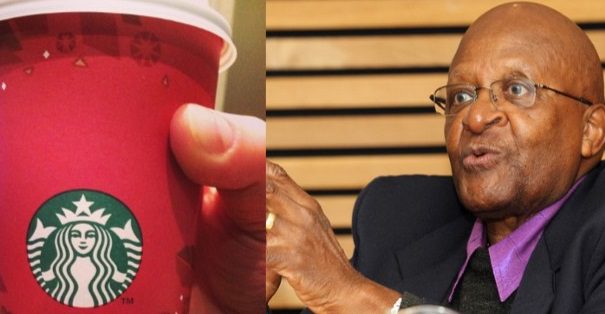 The human sense of identity is very fragile, especially when we seek it in the wrong places.

Whenever I get angry at someone, my spiritual director tells me to enter into that person’s “map.” What does the world look and feel like from that person’s point of view? From within their shoes? Of course, we can never really know the answer to that question, but it’s an exercise in empathy, which I think is crucially important if we are going to follow Jesus in loving our neighbors, who include even our enemies, as we love ourselves.

So I take a deep breath, close my eyes, and with the help of René Girard’s mimetic theory, I try to imagine myself in the shoes of someone who is offended by receiving a red Starbucks cup without the words “Merry Christmas.”

Mimetic theory is crucial to this exercise because it tell us the truth about human identity. Mimetic theory claims that there is no “self” without an “other.” Desmond Tutu explains this principle in his book God Has a Dream: A Vision of Hope for Our Time,

The truth is that “I am because other people are.” I am, I have a sense of self, because I receive my sense of self in relationship with other people. I use the term “other people” in a very broad sense to include all of culture. Because we are relational creatures, for better or for worse, we will always receive our identity from others – our family, friends, co-workers, church, television, movies, and possibly even a blank red Starbucks cup.

Here’s the point: Once we understand the mimetic nature of being human, we can begin to intentionally choose which people and what things we will receive our identity from.

What does this understanding of human nature have to do with the scandal over the red Starbucks cups? Well, here’s what happened to me when I put myself in the shoes of someone who is offended by receiving a blank red Starbucks cup: I felt blank inside. I felt an emptiness within. And that emptiness caused fear inside of me because, in the face of a blank Starbucks cup, I felt how one could begin to lose a sense of self. That emptiness can trigger a burning sense of instability and fear. What do I do with my fear? I could easily become angry and lash out against Starbucks.

I’d like to make two quick points here. First, receiving our identity from a Starbucks cup is what biblical idolatry is all about. It elevates an object of the world to a position that it shouldn’t have in our lives. That’s when our sense of self becomes very fragile. When it’s threatened, even by something as mundane as a blank Starbucks cup, we tend to lash out. But the second point is that telling certain Christians that they have a fragile sense of self because they are in an idolatrous relationship with a red Starbucks cup isn’t actually very helpful. Neither is responding to their outrage with our own outrage against them. Because of our mimetic nature, responding to outrage with outrage only reinforces the outrage between us.

René Girard and Desmond Tutu would say the same thing: we receive our identity through others, but one’s true self is found by receiving it from the God who is love. That God calls us to seek justice and to love our neighbors, including our enemies, as we love ourselves. To paraphrase Ephesians, it’s that love that puts to death the hostility between us and enables us to live into the new creation of God’s universal compassion.

November 12, 2015
Girardian Wisdom For Turning Veteran's Day Back Into Armistice Day
Next Post

November 16, 2015 Nightmare in Paris: Exorcising our Demons
Recent Comments
0 | Leave a Comment
"Church is boring."
Ivan T. Errible The Poor Own The Kingdom — ..."
"" … and the Word became Flesh." That "Word made Flesh" is Jesus Christ.Furthermore, if ..."
Ocelot Aardvark Why You Should Run from “Bible ..."
"nice article."
Brandon Roberts The Gospel is Countercultural: Politics, Palestine, ..."
"What cave do you live in?"
Monday's Child The Left Hand of God – ..."
Browse Our Archives
Follow Us!