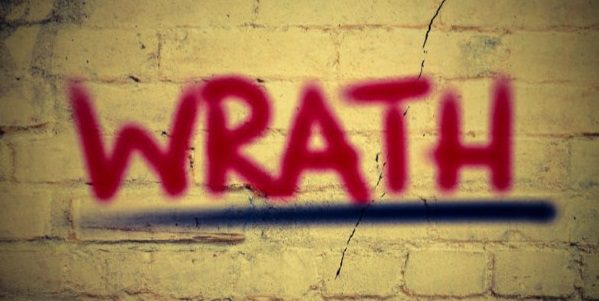 This is a guest post by Matthew Distefano. You can read more of Matthew’s work at his website All Set Free and his book All Set Free: How God is Revealed in Jesus Christ and Why That is Really Good News.

There are certain theological assumptions within American Christianity that you just don’t touch. Over the past few years, however, I believe I have touched them all. Well, perhaps not all. I still have some work to do. And while this hasn’t always been too beneficial for my social standing in the church at-large, it was, for me, a must. You see, I have always been the questioning type, and if I have learned anything from Girard’s mimetic theory, it is that prohibitions increase desire (to say the least!). Tell me I can’t question the doctrine of hell and I will. Tell me I can’t question the doctrine of sola scriptura and, again, I will. And tell me I can’t question the “common” understanding of the “wrath of God,” and well, here I am doing just that.

Like many Western Christian doctrines, the definition of God’s wrath seems to be a given. Frankly though, like so many other “orthodox” views, I cringe at our eagerness to espouse such a belief. I mean, I do understand the propensity to believe in a quid pro quo type of God (thanks for that one Rob Grayson!) who A) reserves blessings for the righteous while B) reserving wrath for the wicked. I understand the human psychological need to ensure that we are in rather than out, that we are Jacob rather than Esau, elect rather than non-elect, and vessels of mercy rather than vessels of wrath (Romans 9:22–23). Ernest Becker’s work on the topic of death anxiety comes to mind in explaining our propensity in doing this. But I will leave that topic for another time (like in my forthcoming book, From the Blood of Abel).

With that being said, what then do I do with this business of the “wrath of God” that the Apostle Paul talks about in Romans 1:18? Isn’t it clear that Paul himself believes that “the wrath of God is revealed from heaven against all ungodliness and wickedness of those who by their wickedness suppress the truth?” It doesn’t get much more obvious than that, does it?

In The Deliverance of God: An Apocalyptic Rereading of Justification in Paul, Pauline scholar Douglas Campbell offers a radical rereading of Romans, with great emphasis being placed on how one should really be reading Romans 1–4. He argues that, instead of Romans 1:18–32 being the voice of Paul; it is instead the voice of the false teachers that were either in Rome or on their way to Rome. Thus, in the first four chapters of Romans, Paul will be “talking through” two dissimilar gospels: his and the false teacher’s. Actually, in reality, it would have been a speaker (Phoebe, see Romans 16:1) sent by Paul who would do the reading. Campbell explains Paul’s method:

“There are certain instances where Paul attributes material to the Teacher directly, using the technique of prosopopoeia. In these texts the Teacher in effect speaks for himself (although suitably crafted by Paul, of course)—first in the opening of his usual conversion speech (1:18–32), and then later in dialogue with Paul (3:1–9). However, for much of the rest of the argument Paul is quoting the Teacher’s teaching, and rather sarcastically, and this is entirely consistent with his main rhetorical goal throughout the section, which is to refute the Teacher in terms of his own gospel.” (Campbell, Deliverance of God, 587)

But why is Paul writing in such a way?

Well, here is how I understand the gist of it.

Paul is frankly quite peeved over the fact that there are teachers teaching a false gospel, both in churches that he founded (Galatia) as well as in Rome. Paul warns his readers about these teachers: “watch out for those who cause divisions and put obstacles in your way that are contrary to the teaching you have learned” (Romans 16:17—my emphasis). In his earlier letter to the Galatian churches, he does the same thing, when he rebukes those who have swindled the Galatians by perverting the gospel of Christ (Galatians 1:7). To Paul, these teachers are “false believers,” whose goal is to enslave those living in the freedom found in Christ Jesus (Galatians 2:4).

So, who specifically are these false teachers and what was their message?

In short, they are Jewish-Christian teachers and their message is a Jewish-centered Christianity. The evidence for their identity is ample:

In addition to the observance to the laws in Torah, these teachers espouse a retributive eschatology, often strongly aimed at “pagan Gentiles” (see Wisdom of Solomon 13–14). That is to say, in line with the theology of Deuteronomy 28, the teachers teach that the righteous (no doubt themselves!) are blessed, while the wicked (no doubt others!) endure God’s wrath. Again, this is the quid pro quo God, but it is not the God of Jesus, as I stated earlier.

Now, focusing our attention back onto Romans 1:18–32, we will consider how Paul sets up both gospels in parallel fashion: his own followed by that of the law-centered, false one.

That “ethical code”—which draws heavily from the aforementioned anti-Gentile, Wisdom of Solomon literature—is laid out all throughout 1:18–32. And while Paul would find fault with the behaviors listed in those verses; that is not the point of his argument.

The point is that Paul is going to then turn the false teachers’ argument in on themselves. In short, they are going to be deemed “hypocrites” by their own logic. In Romans 2:1, the voice of Paul: “Therefore you have no excuse, whoever you are, when you judge others; for in passing judgment on another you condemn yourself, because you, the judge, are doing the very same things (my emphasis).”

What I believe Paul is saying is: “While it may be true that there are those who indeed do the very things you accuse them of, because you are doing the same things, then you are condemned by your own standard!”

I can imagine Paul performing a “mic drop” here.

But he goes on. Paul lays out a mock-dialogue between himself and the false teacher. He does so in order to A) strengthen his case for his gospel and B) model how the false gospel of the teachers is just that, false, bogus, dead-on-arrival. Scholars call this type of argumentation “diatribe,” and it runs from 2:1–4:3. (For those interested, my friend and fellow Girardian Paul Nuechterlein has a rendering of Romans 1:1–4:3 in dialog form that can be found here.) For my purposes though, I want to refocus my attention back on this business of “God’s wrath.”

What is interesting is the way in which Paul specifically speaks of “God’s wrath” throughout this letter. In every instance after Romans 1:18, he simply uses the word orge, or “the wrath,” rather than orge theou, or “the wrath of God” (see 2:5; 4:15; 5:9; 9:22; 12:19; 13:4–5). In other words, the “wrath of God” is only found in the gospel of the false teacher. In contrast, when Paul, during his initial rebuttal in Romans 2:5, talks about wrath, he ties it to human behavior. This subtle change is key. Romans 2:5 reads: “But by your hard and impenitent heart you are storing up wrath for yourself on the day of wrath, when God’s righteous judgment will be revealed (my emphasis).” Nuechterlein explains what is going on here:

“Wrath is simply ‘wrath’ here, and no longer the ‘wrath of God,’ because it can instead be seen to be the wrath we store up for ourselves, due to our idolatry of righteous violence. On the ‘day of wrath,’ namely, the time when our human wrath comes to roost, God’s righteous judgment will be revealed, precisely as something different than our wrath. It will be revealed as a love that reaches out in grace as a free gift in faith (Romans 3:21–26) even to sinners, to God’s enemies (Romans 5:8 – 10).” (Nuechterlein, “My Core Convictions: Nonviolence and the Christian Faith,” part 2)

Now, there is one other instance—namely Romans 3:5—where “wrath” seems specifically attached to God. But even then, Paul qualifies this by saying he is “speaking in human terms.” What is interesting, then, is that when Paul does speak, not in human terms, but rather, in divine terms, he ties it directly to mercy, not wrath. Romans 11:32–33 read: “For God has imprisoned all in disobedience so that he may be merciful to all. O the depth of the riches and wisdom and knowledge of God! How unsearchable are his judgments and how inscrutable his ways!” For Paul, the ways in which God works is so dissimilar to that of humanity, that he deems them unsearchable by human standards. The human mind, which talks in terms of wrath, cannot fathom the God who is wholly merciful.

Now, I realize that much more could be said on this topic. (Isn’t that stating the obvious?) And over the next few years, I am sure much more will. My purposes then were to simply lay out my thoughts on how I approach the book of Romans (specifically chapters 1–4), so that my readers can have a clear picture as to where I am coming from when I think of “the wrath of God.” Without this “new” approach (which is really just an understanding of the original intent) to Paul, I believe him to be a rather paradoxical thinker, not making a whole lot of sense much of the time (for instance, when comparing Romans 1–4 and 5–8). I think many others share this sentiment, as Paul’s writings have historically created quite a bit of tension, both for scholars and lay-persons alike.

For those interested in further study, I recommend the following resources:

The Deliverance of God by Douglas Campbell

Richard Beck’s 12-part review of The Deliverance of God

Campbell-Moo debate, “Is the Lutheran Approach to Pauline Justification ‘Justified’?

What Does The Bible Say About...
Religion Prof: The Blog of James F. McGrath
Related posts from Teaching Nonviolent Atonement