A Nation of “Second Amendment People”: Rhetoric, Reality, and Redemption 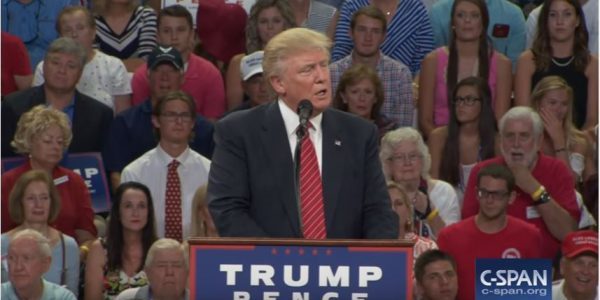 Donald Trump’s despicable comments about “Second Amendment people” being able to do something  about Hillary Clinton and her judicial nominees – which many interpret as a veiled call for assassination – were made in the context of a nation that has made assassination its official policy for years. The violent rhetoric is wrapped in a reprehensible reality.

Five and a half years ago, when Arizona Congresswoman Gabrielle Giffords survived a shooting that left six people dead and 13 injured, our nation was steeped in deadly campaign rhetoric that mirrored our deadly policies around the world. I noted then that violent rhetoric would not resonate so much if we weren’t such a violent nation. That was in the wake of a Congressional election when prominent GOP politicians like Sarah Palin used crosshairs to “target” congress members in campaign paraphernalia, Giffords’ own opponent Jesse Kelly ran on the metaphor, “shoot a fully automatic M-16,” and Senate candidate Sharron Angle spoke of “Second Amendment remedies.” Then, as now, people scarred by war, people suffering extreme mental illnesses, people taught by our culture to fear, or conditioned to glorify acts of violence, were listening. Then, as now, they heard words not in a vacuum, but in a country that launches pre-emptive war against threats more perceived than real, and in an economy stripped of vital necessities by an all-consuming military budget. Then, as now, Republican rhetoric was blamed for the tragedy while the backdrop of bipartisan warmongering went largely ignored.

Seeds of violence take root in soil saturated with blood. Drones terrorize nations where we have never declared war and nations where we have ground troops stationed. With the world as a battlefield under both George W. Bush and Barack Obama, those the United States’ government considers enemies may be assassinated in homes or in public, never mind the innocent civilians around them. Specific individuals are targeted for assassination every Tuesday, while others are deemed worthy of death from afar based on patterns of behavior. That behavior might include trying to save those our government wishes to kill, or paying final respect to them, as strikes have deliberately targeted rescuers and mourners at funerals.  Our policy of long-distance murder doesn’t limit warfare but rather lays the groundwork for larger war, as grieving and desperate people turn to terror organizations for vengeance in the wake of a death of a loved one or merely for survival as war destroys their livelihood. And regime change by assassination is often the United States’ choice method of influencing other nations according to our interests and values. It was by American-enabled assassination that Libyan leader Muammar Ghaddafi was executed, evoking the infamous response “We came, we saw, he died,” from Hillary Clinton.  So assassination, even of world leaders, is hardly unthinkable, at least when the leaders are somewhere else. Sadly, our own leaders think about it, and carry it out, all too often.

As our culture of violence creates enemies abroad, it also breeds a perpetual state of fear at home, and we lash out in fear toward each other. Muslims, immigrants, and African Americans especially are “other-ized” and considered suspect.  Military equipment spills from the streets of Kabul and Baghdad into police forces at home. The militarization of police contributes to — in the words of retired officer Cas Gadomski — an “us vs. them” attitude that often exacerbates other tensions between officers and the communities they “serve.” This attitude infiltrating police culture combined with generations of systemic racism can be deadly; over 100 unarmed African Americans were killed by police in 2015 alone, with police rarely facing charges. Police themselves have also been the victims of our wars coming home, as two military veterans, continuing mimetic cycles of demonization, assassinated police officers in July in response to police shootings. Violence anywhere infects the souls of those who wage it and becomes pandemic.

Donald Trump’s unacceptable joke about the assassination of his political opponent, therefore, was made in a culture that has too long accepted assassination abroad and at home. Increasingly, as we wage violence afar, we will be less able to live in peace or resolve conflicts peacefully at home. As political leaders vie for control of an increasingly violent nation in an increasingly violent world, fear will threaten to overwhelm and threats will become more overt. At least that seems to be the direction in which we are headed now, even as peace remains our most pressing need.

So at a time when political discourse in our violent culture jokingly invokes assassination, I place my hope in one who endured assassination at the hands of humanity to show us the extent of our violence, and rose from death radiating forgiveness to show us that we are better than our deadly ways.  Jesus exposes the depth of the violence in which humanity has been steeped since the beginning of time, opening our eyes to the ways in which we have marginalized, scapegoated, and destroyed victims since the foundation of the world. In the process of exposing the worst within us, he frees us and shows us how to be our best, modeling a life of service, friendship and communion across all boundaries.

As long as partisan and nationalistic blinders obscure us to our own violence, outrage at violent rhetoric like Donald Trump’s Second Amendment comments will be futile at best, and will feed into a cycle of vitriol at worst. We must see how our own violence contributes to a world in which jokes about an enemy’s demise are uttered from pulpits and actual assassinations evoke laughter. Jesus showed his own followers the violence within them and helped them to emanate peace from the inside out. Other leaders from outside the Christian faith have modeled the same message: we cannot hope to save our violent world with more violence, but must repair the harm we have done to others, forgive the harm done to us, and let our common humanity transform us from enemies into friends. A nation committed to peacebuilding would eschew violent rhetoric and policies alike.

Our hope can be found in leaders and movements that help us to recognize our own violence, humble ourselves, repent, and start building peace. Our addiction to violence is consuming the world and spitting out fear, catalyzing new violence on and on in a cycle that will destroy us if we do not curb it now. The good news is that there is so much good within us, so much good within the whole world, because we are all made in image of Love. Humanity can do better than violence. Let’s start now.

Image: Screenshot From Youtube: “Donald Trump on Hillary Clinton and the Second Amendment” by C-SPAN

August 11, 2016
6 Tips for Living with the Donald Trump in Your Family
Next Post

August 15, 2016 Jesus Brings the Fire – A Progressive Reclaiming of the Apocalypse
Recent Comments
0 | Leave a Comment
Browse Our Archives
get the latest from
Teaching Nonviolent Atonement
Sign up for our newsletter
POPULAR AT PATHEOS Progressive Christian
1