Ryan Lochte and Everything Wrong with America

Ryan Lochte and Everything Wrong with America August 25, 2016 Adam Ericksen 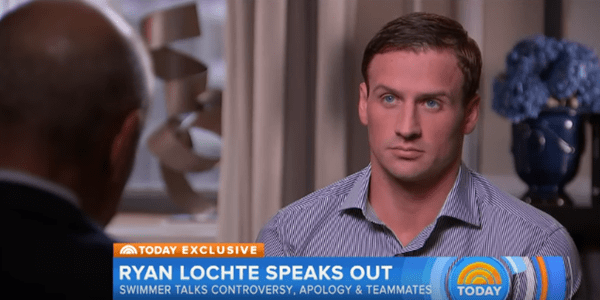 Ryan Lochte is an embarrassment to the United States. Maybe even the world.

We don’t know the full story. But we do know that he peed. He lied. He vandalized a sign, if not a bathroom. He “over-exaggerated,” lied, and embarrassed Brazil. He drank himself so full of alcohol that he struggled to control his body. He acted like an immature jock and brought down his younger teammates with him.

Good articles have been written about Lochte’s white privilege, which has allowed him to manage his situation in a way that a black athlete wouldn’t. It is an excellent point and I encourage you to read those articles.

But there’s another point to be made. Lochte is guilty. But he’s a scapegoat. Why? Because like all scapegoats, the scandal surrounding him is a distraction. Indeed, the media frenzy following the incident distracted us from appreciating the achievements of other Olympians. But this scandal, as with all scandals, distract us from so much more. It distracts us from ourselves.

Ryan Lochte is an embarrassment. But his actions at the Brazilian gas station holds a mirror up to American culture. He reflects everything that’s wrong with America. It’s ugly, but we need the courage to look in the mirror.

Lochte, drunk with alcohol, vandalized and urinated on a Brazilian gas station, but America, drunk with violence, has utterly destroyed the lives of thousands of innocent civilians in the Middle East.

And it has no signs of stopping. No matter who we vote for this election, there is one party that runs Washington – the War Party. War is sacred in America. It must not be criticized. For example, during the Democratic National Convention’s fabricated portrayal of party “unity,” war protestors were smothered by the War Party’s relentless silencing of protests.

The War Party wants to hide the destruction of American wars from the American people. It’s akin to a bunch of Olympic frat boys denying that they did anything wrong by vandalizing a Brazilian bathroom. In fact, it’s their fault! They started it by pointing a gun!

Unfortunately, the American War Party is worse. Since the War on Terror began, the United States has been on a path of destruction that’s had adverse effects; adverse that is, if we wanted to effect peace. According to anthropologist René Girard, violence is mimetic.* It’s imitative, but it also escalates the violence between us and our enemies. Violence gives us and our enemies an excuse to retaliate, which only keeps the cycle of violence in circulation. In this situation, everyone claims that the other side started the violent conflict by attacking first and the violence escalates because everyone wants to deliver the final blow.

generated a stunning sevenfold increase in the yearly rate of fatal jihadist attacks, amounting to literally thousands of civilian lives lost; even when terrorism in Iraq and Afghanistan is excluded, fatal attacks in the rest of the world have increased by more than one third.

Since Bergen and Cruiskshank performed their study in 2006, President Obama has changed the policy of the War Party, moving from “boots on the ground” to “drones in the sky.” Whereas Lochte exaggerated his story in Brazil, Obama has lied about the efficiency of his drone policy in the Middle East. He claims that in seven years of Drone attacks, less than 116 civilians have been murdered. Independent studies show a much higher number, above a thousand civilians killed.

Instead of over-exaggerating the truth, Obama has under-exaggerated the truth, with a keen strategy of misleading Americans. In order to decrease the amount of civilian casualties, Obama’s led War Part “counts all military-age males in strike zones as combatants.”

With help from a whistleblower, The Intercept reported that, “Between January 2012 and February 2013, U.S. special operations airstrikes killed more than 200 people. Of those, only 35 were the intended targets. During one five-month period of the operation, according to the documents, nearly 90 percent of the people killed in air strikes were not the intended targets.”

The War Party has no intentions of telling us the truth about American violence, or of bringing peace to the world. Our politicians are pawns to an absolute faith in violence that the War Party demands. At least Lochte attempted to apologize for pissing on the walls of a Brazilian bathroom. The American War Party will never apologize for pissing droned missiles from the Middle Eastern sky, killing innocent civilians and destroying thousands of lives.

In the meantime, we American citizens turn a blind eye to the destruction wrought by the “War on Terror.” Instead, we blame people like Ryan Lochte.

He’s the violent one who embarrasses us by going to another country and destroying their property.

The truth is that Lochte’s actions at that Brazilian gas station holds a mirror up to American culture of militarism that destroys countries without remorse. But American militarism has the consequences of fomenting anger, resentment, and a desire for revenge – in other words, American militarism gives ISIS exactly what they want – an excuse to keep the cycle of violence in circulation.

NPR laments Lochte’s actions, stating “…the U.S. will leave Rio with an impression no one can be thrilled about: that of the “ugly American,” who gets to walk away from a mess of his own making, while others have to live with it.”

*For more, see Girard’s book “Battling to the End.”

August 24, 2016
Wednesday Sermon: The Day the Clouds Cleared for a Moment
Next Post