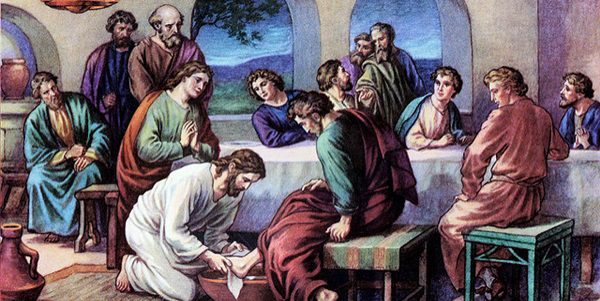 NT Wright has a very helpful way of explaining the Atonement. He states that, “When Jesus wanted to explain to his followers what his death would mean he didn’t give them a theory, he gave them a meal on one hand and a dramatic action on the other.”

Today is Maundy Thursday, the day when we remember that meal and the dramatic action Jesus shared with his disciples. “Maundy” comes from the Latin word mandatum, which means mandate. The mandate or commandment. Jesus says, “I give you a new commandment, that you love one another. Just as I have loved you, you also should love one another. By this everyone will know that you are my disciples, if you have love for one another.”

The meal and the dramatic action reveal not only the meaning of Jesus’ death, but also the meaning of his life lived in the Spirit of God’s love. In old English, Atonement literally means “at-one-ment.” We are meant to be at one with God, other people, and all of creation. And Jesus shows us how to be at one through acts of radical love.

John 13 tells the story. Jesus and his disciples huddled together to celebrate the Passover, the politically charged celebration of the Exodus, when God led the Israelites out of Egypt. Think Independence Day on steroids. Jesus knew that his life will lead to a different kind of Exodus. It won’t lead to a violent defeat of Rome, which was the Egypt of his day. No, his Exodus was much more universal and timeless. Jesus led his disciples on an Exodus away from hate and violence into the new creation of universal love.

That love was on display during the meal and the dramatic action of Maundy Thursday. My point centers Jesus’ reaction to Judas Iscariot. According to John, Jesus knew that “The devil had already put it into the heart of Judas son of Simon Iscariot to betray him.”

But that’s not what Jesus did. Instead, he stood up from the table and performed a different kind of dramatic action. He washed his disciples’ feet. Instead of uniting his disciples in hatred against Judas, he washed Judas’ feet. Jesus repeatedly told his disciples he came not to be served, but to serve. He came to serve even Judas.

But that’s not all. He also fed Judas with this holy meal.

Jesus wasn’t naïve. The story makes it clear that he knew Judas would betray him. Before the meal, he told his disciples that while their feet were now clean, not all of their hearts were clean. “Very truly I tell you,” Jesus stated, “one of you will betray me.”

Simon Peter asked who would betray him. Jesus responded, “It is the one to whom I give this piece of bread when I have dipped it in the dish.” Jesus then gave the bread to Judas and said to him, “Do quickly what you are going to do.”

But Simon Peter let Judas go. Why? The story doesn’t tell us. Maybe Simon Peter was moved by the fact that Jesus just washed Judas’s feet. Maybe, if just for a moment, Simon Peter knew that God calls us to respond to violence with nonviolent love and service. And maybe that is what the Atonement is all about.

Image: Flickr, Waiting For the Word, “Jesus washes the feet of his disciples,” Creative Commons License, some changes made.

April 12, 2017
Wednesday Sermon: How to Know Who Your Neighbor Is
Next Post