Impeaching Trump: The Bible’s Prophetic Message for the President 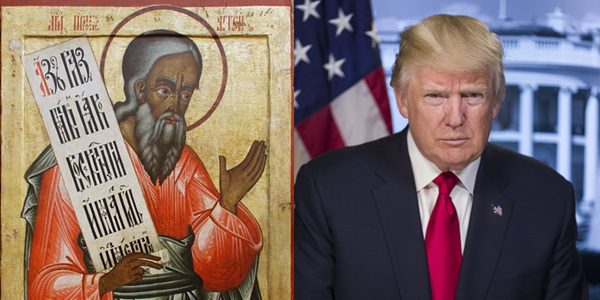 Rumors and accusations swirl around President Trump. Are his days as president numbered? Are Democrats and Republicans uniting against him as he makes one blundering political move after another?

Trump’s controversial meeting with Russian Foreign Minister Sergey Lavrov is the latest event in the drama of the Trump presidency. The White House is apparently in chaos trying to clean up the endless scandals coming from this administration. Trump allegedly shared classified security information with the Russian officials that could damage our relationship with critical allies who delivered that information to the U.S.

Trump gets all the great intel. Isn’t that aswesome. It’s too bad he doesn’t have the intel to keep his mouth shut.

But it gets even worse for Trump. The meeting with the Russians came a day after he fired James Comey, the head of the FBI. Why did he fire the head of the FBI? Trump claims it was because Comey wasn’t doing a good job. In particular, the White House says he wasn’t fair to Hillary Clinton. Never mind the that just a few months ago Trump LOVED what James Comey did to Hillary Clinton.

Representative Al Green of Texas (no, not that Al Green) does not think we can find love and happiness with Donald Trump. There’s something going wrong, so he has called for impeachment because Trump is obstructing justice. “I rise today, Mr. Speaker, to call for the impeachment of the president of the United States of America for obstruction of justice.”

Rep. Green quickly stated that, “Impeachment does not mean the president will be found guilty. It simply means that the House of Representatives will bring charges against the president. It’s similar to an indictment. … Then the Senate can have a trial to determine the guilt or the innocence of the president.”

One key word in this drama is “allegedly.” We don’t know all the facts surrounding Trump, Russia, and the FBI. But we do know that from the Bible’s perspective, Trump is obstructing justice – justice for the poor.

In America, we often think justice is getting what I deserve. Justice often is framed like this – I’ve fought hard for what I have. Justice means that I get to keep it.

But that’s not the Bible’s prophetic view of justice. For the Bible, justice is not about me getting what I deserve. Rather, justice is about meeting the needs of the poor, weak, and marginalized.

It’s important to note that the prophet’s role was not to predict the birth of Christ. That was a Christian move to de-politicize the ancient prophets. Make no mistake, the prophets were political. They cared about politics because God cares about politics.

The prophets entered the political system to challenge the rulers to care for the poor. For example, Isaiah wrote this to the rulers of his day,

Ah, you who make iniquitous decrees,
who write oppressive statutes,
to turn aside the needy from justice
and rob the poor of my people of their right,
that widows may be your spoil,
and that you may make the orphans your prey!
What will you do on the day of punishment,
in the calamity that will come from far away?
To whom will you flee for help,
and where will you leave your wealth,
so as not to crouch among the prisoners
or fall among the slain?
For all this his anger has not turned away;
his hand is stretched out still (Isaiah 10:1-4)

Trump, Impeachment, and Do Remember that Health Care Bill?

We don’t know for sure, but Donald Trump may be impeached because of his scandals with James Comey and his Russian connections. But we do know that Trump has already been obstructing Biblical justice for the poor. The scandals of the last week have distracted us from discussions about Trump’s health care proposal. It seems like so long ago, but the American Health Care Act passed through the House of Representatives on May 4th. Due to the recent scandals, our culture has nearly forgotten the obstruction of justice this act would cause to the poor.

If Trump is impeached, Mike Pence will simply continue the obstruction of justice that is the American Health Care Act. Who are the winners and losers of the bill? The act will benefit high income earners by eliminating certain taxes for individuals and couples earning $200,000 and $250,000 respectively. Poor people will be the losers of this bill as states are expected to cut expansions of Medicaid programs. It will also lower available subsidies for anyone living just over the poverty line. Older Americans will also lose from the bill. A 64-year-old could pay up to five times the amount of an 18-year-old. The Congressional Budget Office estimates that the price for older people will be so high that many won’t be able to afford insurance coverage.

But there is hope. Justice can prevail. Most of the rulers of ancient Israel and Judah didn’t care about the poor, which is why those nations fell. But a few rulers did. The prophet Jeremiah claimed that king Josiah, “judged the cause of the poor and needy; then it was well. Is not this to know me? says the Lord.”

May 16, 2017
In the Spirit of Mother’s Day, Let Us Nurture a Nonviolent World
Next Post