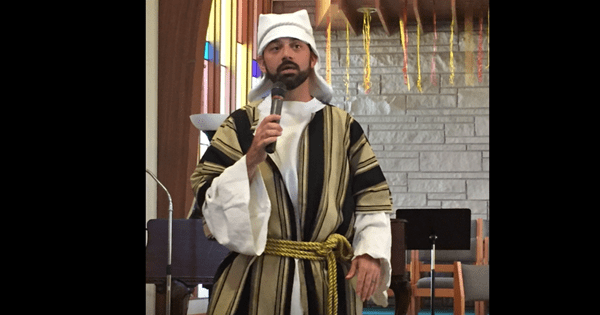 The RavenCast interview series challenge “us vs. them” thinking with new perspectives on the issues that divide us. Hear from knowledgeable guests and join live with your questions and comments. Can’t join live? Watch or listen to the recordings at your convenience. In this episode, the Rev. Adam Ericksen mixes things up with a sermon he preached at Lake Oswego United Church of Christ. Adam became Jeremiah by dressing in an ancient prophetic costume to deliver a message for today. You can listen to the sermon by clicking on the MP3 above, or you can watch the sermon below.

The prophet Jeremiah spoke out against the rulers of his day. The kings of Judah and his people neglected to care for the poor, the weak, and the sick. They also exploited the poor to give more money to the rich. Jeremiah hated that the rulers didn’t care for the immigrant in their midst.

July 7, 2017
Give People A Reason to Believe in Forgiveness: On Racism and Repentance
Next Post

August 15, 2017 Jesus, Justice, and Charlottesville
Recent Comments
0 | Leave a Comment
"" … and the Word became Flesh." That "Word made Flesh" is Jesus Christ.Furthermore, if ..."
Ocelot Aardvark Why You Should Run from “Bible ..."
"nice article."
Brandon Roberts The Gospel is Countercultural: Politics, Palestine, ..."
"What cave do you live in?"
Monday's Child The Left Hand of God – ..."
"The best of doctors are destined for Gehenna, and the worthiest of butchers is Amalek’s ..."
Nimblewill The Christian Doctrine that Leads to ..."
Browse Our Archives
Follow Us!

If You Think Trump Was Picked...
The Official Blog of Benjamin L. Corey
Related posts from Teaching Nonviolent Atonement