Trump Warns about the Downfall of the Western World. But He Doesn’t Know Our Greatest Threat. 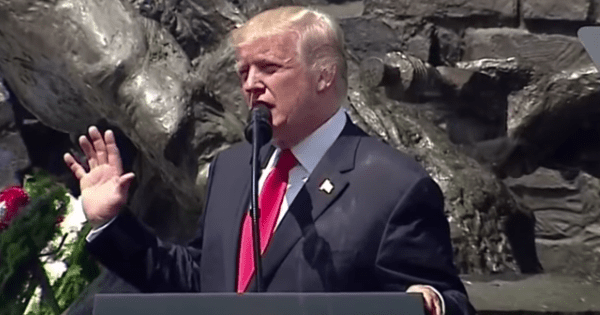 The United States is exhibiting all the symptoms of a nation in a death spiral.

We see the evidence everywhere, but the crisis extends beyond the U.S. I don’t agree with Donald Trump very often, but he’s right about one thing. At the beginning of his European trip, he said in Poland, “The fundamental question of our time is whether the West has the will to survive.”

Specifically, internal hostility is destroying the US. There have been so many examples of this during the last six months that it’s hard to just pick one. And I don’t want to simply blame the Trump presidency for this demise. For the United States to survive, we all need to take responsibility for ending the death spiral.

When we spiral, we get caught in a vortex of imitation and accusation. The more we insist that we are right, the more we come to resemble the ones we accuse of being wrong. Here’s a good example of this dynamic.

Yesterday, #CNNBlackmail was the leading topic on Twitter. It stemmed from a Reddit user, “HanA***Solo,” who created an anti-CNN meme. I’m sure you’ve seen it – the one of Donald Trump’s WWE performance where he beat up Vince McMahon. Only the meme has the CNN logo on McMahan’s face. Trump retweeted the meme and the scandal quickly escalated.

The media claimed Trump once again threatened the media, you know, “the enemy of the people.” CNN responded in a statement that the president “is involved in juvenile behavior far below the dignity of his office.” In other words, “we are not the enemy – the enemy is Trump!” The relational dynamic of imitative accusation is so common that there’s a name for it – CNN and Trump have become enemy twins.

Here’s a related example. Last month, Trump was accused of attempting to blackmail the former FBI director James Comey. He threatened Comey by saying that Comey better hope Trump doesn’t have tapes of their conversation. It was an empty threat, but it seemed as if the President was attempting to intimidate Comey into silence.

CNN, in good enemy twin fashion, seems to be imitating Trump’s tactics. The network discovered the personal identity of the Reddit user who posted the meme. The Reddit user apologized for his actions and deleted his account. Andrew Kaczynski of CNN then produced a statement:

CNN is not publishing “HanA**holeSolo’s” name because he is a private citizen who has issued an extensive statement of apology, showed his remorse by saying he has taken down all his offending posts, and because he said he is not going to repeat this ugly behavior on social media again. In addition, he said his statement could serve as an example to others not to do the same.

CNN reserves the right to publish his identity should any of that change.

Many have interpreted that last line as a threat, accusing CNN of blackmail. CNN claims it didn’t mean the statement to be a threat, and that many are misinterpreting that line. This is the same defense the Trump offered of his threats against Comey, giving more evidence that we are indeed in a spiraling vortex of imitation and accusation.

And the threats of revenge continue to escalate in mimetic fashion. Many have “called for a very personal form of revenge against CNN, and Kaczynski specifically.” A website posted personal information for Kaczynski, including family members. Another site demanded that CNN employees quit their job and condemn the network, or they and their families will suffer violence.

If the United States falls it will not be from North Korea or from Russia. It will be from our own internal hostility and violence. Our greatest enemy is the beast within or own borders, indeed, our own lives. If the United States wants to survive, our only hope is to tame the beast through acts of love, forgiveness, and justice.

July 5, 2017
Sermon: A Warm Smile, a Solid Handshake and a Sure Hope
Next Post

July 7, 2017 Give People A Reason to Believe in Forgiveness: On Racism and Repentance
Recent Comments
0 | Leave a Comment
Browse Our Archives
Follow Us!