Sermon: Jesus, Who Rescues Us from the Wrath That Is Coming, Constantly Coming!

Sermon: Jesus, Who Rescues Us from the Wrath That Is Coming, Constantly Coming! October 27, 2017 Tom Truby 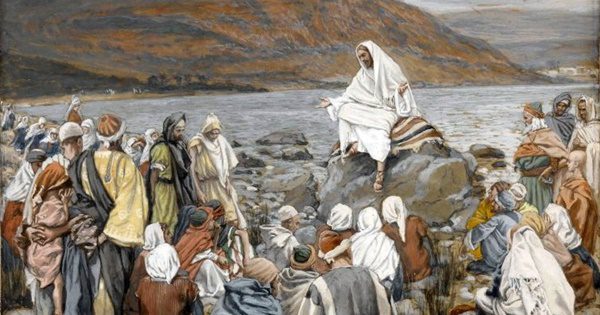 In this sermon, Tom explores our mimetic natures. Jesus invites us to follow him. He knows that, whether we realize it or not, we will follow someone. The question is, who will we follow?

Jesus, Who Rescues Us from the Wrath That Is Coming, Constantly Coming!

As we begin today’s gospel text, Jesus has given his final response to the religious leaders explaining the foundation of his authority. Through story he suggests his authority is rooted in his impending crucifixion and resurrection.  It comes from his willingness to expose the source of human culture founded on coercion and violence by submitting to it himself and suffering its full consequences on the cross.

At the same time he undoes all human kingdoms by forgiving those who use coercion and violence even as they use it.  His resurrection, now days away as he has already made his entry into Holy Week, soon completes the communication by signaling that the power of life, God’s power, cannot be defeated even though humans resort to murder. The real God of history has been revealed and the pretender, the father of lies, and those in league with him, has been exposed. Jesus’ kingdom is rooted in the God of life and not Herod’s God of threat, coercion and death.

The Pharisees, who have not done so well in their attempt to silence Jesus, at this point change strategies. The text says, “Then the Pharisees went and plotted to entrap him in what he said.”

A delegation arrives that includes Pharisees and some Herodians. Herodians were high government officials from Herod’s administration.  Ordinarily Pharisees and Herodians were enemies but apparently they sense a common threat in Jesus.  When someone threatens a culture’s system of entitlement and exclusion both established religion and politics often react defensively.  Both are often built on the same foundation of violence though they may portray themselves as in different camps.

They approach Jesus behind the duck-blind of sincerity.  “Teacher, we know that you are sincere, and teach the way of God in accordance with truth and show deference to no one; for you do not regard people with partiality.”

While what they say is true, what do we make of that string of words coming from them? It drips with duplicity. Sometimes I think we underestimate the human capacity for deception.

Are they deliberately lying or do they have some way of convincing themselves their ends justify the means? Are they trying to flatter Jesus, hoping he will believe it safe to say more than he otherwise would? Do they almost believe him themselves but know they must repulse him to protect their privilege?

At another level, I wonder how they would approach Jesus as individuals rather than a group composed of natural enemies, a rivalrous crowd with the Pharisees keeping an eye on the Herodians and the Herodians suspiciously watching the Pharisees. Would their thinking change if they approached from outside the gravitational pull of group-think rooted in mutual self-interest?

Was Nicodemus among them? In the Gospel of John, Nicodemus, a very important Jewish leader, comes in the darkness and privacy of night to acknowledge that he believes Jesus.

They reveal their bait. “Tell us, then, what you think.  Is it lawful to pay taxes to the emperor, or not?”

The trap is baited with flattery but Jesus sees through it.  “Why are you putting me to the test, you hypocrites?”  He knows they don’t believe in equality of all people before God; that’s a lie.  He tells them he knows what they are up to and then accepts their challenge.

“Show me the coin used for the tax.” he commands.  To pay this particular tax to Rome they had to use a special coin issued by the government.  Interestingly, Jesus doesn’t have one, and so they bring one to him.

“Whose image is this and whose title,” He asks?  They answer, “The emperor’s.”  Then Jesus says, “Give therefore to the emperor the things that are the emperor’s, and to God the things that are God’s.”  In essence he says Caesar made these coins, they bear his image and therefore belong to Caesar; give to Caesar what belongs to him.  The Pharisees and even those from Herod’s administration know that humans are made in the image of God according to Jewish values and tradition.  Being made in his image means they belong to God and will live in a way that conforms to God’s desire. God desires the good of all his people but they have ignored that desire and seek only their own well-being. In one sentence Jesus cuts through the fog of deception. They are amazed and go away.

Whose image shapes us? Are we made in God’s image or in the image of Caesar?  If we give to God what is God’s, how does that change our behavior and values?  Caesar makes claims on our money and we must comply, but Caesar can’t have our hearts.

In Paul’s opening words to the people of Thessalonica he says, “For we know, brothers and sisters beloved by God, that he has chosen you.”  We didn’t choose God, God chose us and we are not available to Caesar.

Paul goes on, “You became imitators of us and of the Lord.” We are all imitators and that’s a good thing.  Imitation is what we humans do; it’s unavoidable.  We can imitate Caesar or we can imitate our Lord.  Whose image will we choose? Let me bring science into this.

In 1992 Scientists in Parma, Italy stumbled on an important neurological discovery.  They noticed that when a monkey saw a human grab a peanut, some of the monkey’s brain cells fired as though the monkey were grabbing it himself.  They labeled these special cells that did this “mirror neurons” and discovered later that humans have more of these than any other creature.

Most scientists now think these mirror neurons make it possible for us to learn and feel with other humans.  If that is true, then these neurons are very important for the transmission of culture.  And it is also true that who we watch becomes critically important, for it determines who we become.  That’s why Paul thinks it’s important that the Thessalonians become imitators of Paul and our Lord.  Who they imitate will determine who they become.

The issue is who we copy.  When we copy people, who are themselves copying people, it gets very confusing, messy and conflictual.  But what happens when we copy someone who in-no- way is copying any other human?   Instead, this One (capital O) is totally dedicated to copying God, a point Jesus makes over and over again.  If we copy this One, we find ourselves pulled out of copying each other and gradually freed from the tyranny of our rivalry and violence. It is in this sense that we become free in Christ.

If we think of ourselves as imitating Jesus, whose image orients us?  Can the image of an emperor on a coin be our model?  Yes, but when it does we are not imitating Jesus.  We have allowed the image of a human to form us, with all the consequences that evolve from that.

Paul, commending the people in Thessalonica says, “You turned to God from idols.” He didn’t just mean stone statues; he meant any other human or human-generated set of ideas that we make more important than God. So he commends the Thessalonians for turning to God from idols “to serve a living and true God, and to wait for his Son from heaven, whom he raised from the dead—Jesus, who rescues us from the wrath that is coming.”

And the wrath that is coming; it’s not God’s wrath; it’s human wrath.  As we know and experience every day, human wrath just keeps coming, and coming.  Every day we see new forms of it. Human wrath is what happens when humans make other humans their gods and cease serving the God in whose image we are all made.  This is the wrath we live in the midst of, and it is in the midst of this, that we “wait for his Son from heaven, whom he raised from the dead—Jesus, who rescues us from the wrath that is coming,” constantly coming. Thanks be to God.  Amen.

James Tissot [No restrictions or Public domain], via Wikimedia Commons