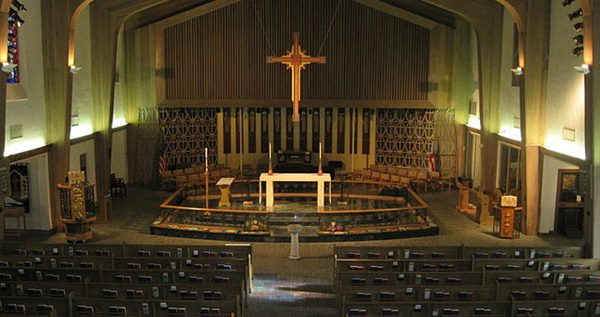 Jesus’ values include blessings and fullness of life for everyone.
The anti-Jesus values have rewards for some but great sorrow, suffering, and violence for others.

In this sermon, Tom discusses the Christian celebration of All Saints Day. According to the book of Revelation, the saints are those who refuse to return violence for violence, “because they have been grasped by a new vision of humanity” in Jesus. Read on to discover the new humanity that Jesus offers!

This morning we will be naming some of our saints.  When I think about our saints, this passage from Revelation 7 comes to mind.

9 After this I looked, and there was a great crowd that no one could number. They were from every nation, tribe, people, and language. They were standing before the throne and before the Lamb. They wore white robes and held palm branches in their hands. 10 They cried out with a loud voice:

“Victory belongs to our God
who sits on the throne,
and to the Lamb.”

11 All the angels stood in a circle around the throne, and around the elders and the four living creatures. They fell facedown before the throne and worshipped God, 12 saying,

“Amen! Blessing and glory
and wisdom and thanksgiving
and honor and power and might
be to our God forever and always. Amen.”

13 Then one of the elders said to me, “Who are these people wearing white robes, and where did they come from?”

Then he said to me, “These people have come out of great hardship. They have washed their robes and made them white in the Lamb’s blood. 15 This is the reason they are before God’s throne. They worship him day and night in his temple, and the one seated on the throne will shelter them. 16 They won’t hunger or thirst anymore. No sun or scorching heat will beat down on them, 17 because the Lamb who is in the midst of the throne will shepherd them. He will lead them to the springs of life-giving water, and God will wipe away every tear from their eyes.

This passage provides a glimpse of the Lamb’s role in bringing all to the merciful throne of God.  It is a passage for those who have suffered and yet maintain their hope.

The Book of Revelation was written to people who were experiencing suffering and death at the hands of empire because they had been grasped by a new vision of humanity.  These were people offended by the world’s cruelty who had found an alternative in Jesus.

Before Jesus, humans have always expected salvation to come from warriors, strong men, and overwhelming force.  But God surprises us, for at the center of the throne we find a slain lamb, standing, who has become our shepherd, who guides us to springs of the water of life.  Human robes, soiled by the great ordeal out of which we have come, are washed and made white by the blood of the Lamb.

The Lamb of God, gentle and innocent, who himself suffered the cruelty of the world, exposed human cruelty and transformed it by forgiving those caught doing it.  Now all who have died in the midst of the struggle wave palm branches and sing, “Salvation belongs to our God who is seated on the throne, and to the Lamb.” A great multitude sings from every nation, from all tribes and peoples and languages, so many that no one can count!

All Saints Sunday presents us with a second reading so beautiful I don’t know how to preach it without ruining it.

See what love the Father has given us, that we should be called children of God; and that is what we are.  The reason the world does not know us is that it did not know him. Beloved, we are God’s children now; what we will be has not yet been revealed. What we do know is this: when he is revealed, we will be like him, for we will see him as he is.  And all who have this hope in him purify themselves, just as he is pure. 1 John 3:1-7

This morning we celebrate the Saints who reflect him, but in the future we will have Jesus himself.  This hope powerfully shapes us from the inside.

How do saints live?  What are the values they embrace when they are being saints?

Early in his ministry, Jesus laid out his values in the Sermon on the Mount.  These values were different than the values of the culture around them.  Paul Neuchterlein, in a document just written, contrasts Jesus’ values with the values of empire and nationalism—the usual values of the culture around us no matter where we live. Remember Jesus’ values are meant for disciples, those who want to follow Jesus, not the crowds who didn’t know Jesus very well. The text says “When Jesus saw the crowds, he went up the mountain.” He was escaping the crowds.  I had never seen that before but there it is.  We wanted to speak privately and intimately to his disciples.  As he goes up the mountain think of Moses on the mountain with the people far below, only now we have Jesus and his disciples, a community, rather than Moses alone.

Here are The Beatitudes using the New Revised Standard Version of the Bible followed by Neuchterlein’s imaginative anti-beatitudes.  I offer them as food for thought:

Popular and “rewarded are you when all speak well of you and privilege you and prop you up against the empire’s enemies. Rejoice and be glad, for in the same way the empire has always put down its enemies.”

Jesus’ values include blessings and fullness of life for everyone.  The anti-Jesus values have rewards for some but great sorrow, suffering and violence for others.

November 13, 2017 Sermon: The Virtue of Being Foolish
Recent Comments
0 | Leave a Comment
Browse Our Archives
get the latest from
Teaching Nonviolent Atonement
Sign up for our newsletter
POPULAR AT PATHEOS Progressive Christian
1