Jesus: Empowering Us To Be Human In A Dehumanizing World

Jesus: Empowering Us To Be Human In A Dehumanizing World December 22, 2017 Lindsey Paris-Lopez 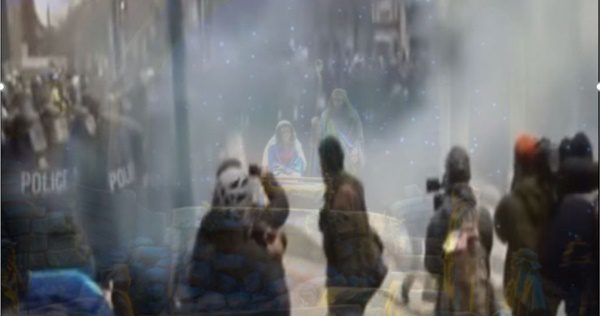 The word cuts through the mental images swimming in my mind as I recall a year of belligerent warfare abroad and creeping authoritarianism at home. The erosion of our voices, drowned in a cacophony of militarism and greed, has been going on far longer than just this past year, of course. But as 2017 draws to a close, my mind is bombarded by scenes of cruelty: immigration enforcement deporting undocumented immigrants with no criminal record, shutting the doors to refugees and immigrants from predominately Muslim countries even as civilian death tolls from drone strikes more than double, parents begging Congress to renew health insurance for their children. Bookending all of this and so much more is an event that began just as 2017 commenced and continues now as the year draws to a close.

On Inauguration Day, about 200 protestors were arrested on the pretense of violence by just a few members. Medics, journalists, and citizens exercising their Constitutional right to assemble and voice dissent await a verdict that will determine if the mere presence at a protest that includes property destruction by a few warrants decades of jail time (up to 60 years). The prosecution is arguing that medics armed with gauze were “prepared for war” as they aided and abetted “rioters,” disregarding the war-like behavior exhibited by law enforcement officers indiscriminately firing pepper spray and hurling tear gas canisters into crowds. Demonizing and criminalizing people for voicing dissent perpetuates injustice and obliterates democracy. And even if the protestors are found not guilty, their arrest and charges have already caused them and their loved ones considerable harm.

And as egregious as the mass arrest of protestors, known as the J20 defendants, is, it strikes me as the domestic reflection of the dehumanizing foreign policy the US government has wielded under the War on Terror. Horrific as it is to arrest hundreds for the actions of a few, it is a pale shadow of the fiery death-by-drone sentence to which we regularly condemn Muslims half a world away for being in the vicinity of those we presume to be plotting acts of terror. Collective punishment – not only in the form of civilian deaths but in the forms of rendering people homeless, destroying infrastructure and food supplies, scaring children out of going to school or even playing outside – this is the hallmark of US policy abroad. We cannot be surprised that the powers of greed and violence our government wields abroad is also being directed inward, to silence and control us.

The dehumanization our government has sewn abroad is spreading, dragging us down, threatening to wash us away.

I gasp for hope as I feel myself drowning in despair.

This is, after all, the season of hope, the season of Advent, the season of preparing the way of the Lord. And dispelling the shadows of hopelessness is a light of faith, a light of resilience. God has sent this light into all of our hearts to be our inner guide, to disperse the darkness of our doubt and gravitate us all to recognition of the divine spark of humanity – of love – within one another.

Mary nurtured this light as she sheltered the incarnation of Divine Love within her womb. A poor, unmarried, pregnant woman, vulnerable to the condemnation of a patriarchal world that could put her to death, she nonetheless felt a surge of hope when she proclaimed:

My soul magnifies the Lord, and my spirit rejoices in God my savior, for he has looked with favor on the lowliness of his servant. Surely, from now on all generations will call me blessed, for the Mighty One has done great things for me, and holy is his name. His mercy is for those who fear him from generation to generation. He has shown strength with his arm; he has scattered the proud in the thoughts of their hearts. He has brought down the powerful from their thrones, and lifted up the lowly; he has filled the hungry with good things, and sent the rich away empty.

I ponder the words of the Magnificat, and I become inspired by Mary’s hope in the midst of such a fearful time, for herself and for the world. As the embodiment of Love grew within her, she knew that God was on the brink of overturning the oppressive structures of the world, of lifting up the marginalized and dispelling the power that was crushing the weak.

But how does God bring justice, uplift the vulnerable, set the world right? The hope kindled by Mary’s subversive hymn is met with the image of the Christ child “away in a manger.” A helpless infant coming among us in the humblest of ways. This little babe, born on the margins and marked for death from birth, will grow to be a man who heals the sick, restores sight to the blind, embraces the outcasts, and speaks truth to power – all while teaching us to love our enemies and refuse retaliation. The wonder of it all – the light of the world wrapped up in a tiny human package – stirs my soul. But I consider the rapidly unraveling world, the looming threat of violence hanging over us all, the overwhelming cruelty, the greed and powerlust and sheer indifference to suffering that has blinded the Powers that Be to those they harm, and I wonder: is Jesus enough?

And in the depths of my soul I feel the stirring response: yes.

When we consider the infancy of the Lord of Heaven and Earth, we can remember the humanity of all, the need of all, the dependency we all have upon each other. God incarnate came into this world utterly dependent on us. Our salvation lies in seeing the living God in all humanity and recognizing our need to serve one another as we would serve the living God, our need to depend upon one another and care for one another as God has entrusted us with God’s own care.

To be human is to be a reflection of God, made in God’s image. And so when our understanding of God is one of power and might, a violent force that crushes enemies, a king that revels in riches and luxury, it is only natural for the humanity of the weak and vulnerable to be denied, to go unrecognized. The dehumanization of the poor and marginalized, the utter indifference to or celebration of loss of life when it comes to those we consider enemies, comes from the worship, however unconscious, of a false god. The god of militarism and greed, the god of nation against nation, the god of me against you – this is a god of exploitation and death.

It is not the God who created this world in a dance of self-giving Love, the God who imparts Love in our hearts. Jesus embodies and introduces us to this God, opening our eyes to the Love that permeates the whole world by awakening the Love we hold within ourselves. Love reaches out in compassion to share the burdens of the suffering. Love sees the faces of those crushed by violence, racism, greed, people who are exploited, people who are discarded, people who have been treated like objects or garbage. Love also sees the disease of hatred and fear in those who would use and abuse others. Love steps in to heal, a balm of relief to those who live without comfort, a painful but necessary medicine for those who take comfort at the expense of others.

Is Jesus enough to recall us to our humanity in these violent, terrifying times?

Jesus must be enough, because Jesus is the embodiment of Love that lives within all of us. The fullness of love in the fragility of a human body teaches us to see God in everybody.

Against the cruelty and violence of the world, the infant Jesus seems so small. The nonviolent Jesus seems so powerless against the powers of destruction and war. But this powerless human empowers us to live into our humanity. If we can see the vulnerability in God, then we can see God in the vulnerable. We can see the humanity in those who have been dehumanized; we can even recognize the ways we have dehumanized. And in that recognition, our hearts break open, and our humanity is restored in the recognition of the humanity of others.

I consider again the dehumanization involved in the mass arrest of the J20 protestors. I know that our nation was built on dehumanization, on genocide and slavery. I know that we spread dehumanization abroad, bombing and exploiting and exporting over half of the world’s weapons. The J20 protestors spoke out against a culture of cruelty and dehumanization, and are now themselves being dehumanized. In an upside-down world ruled by the false gods of war and greed that corrupt human hearts, speaking up for the vulnerable, speaking for the voices of all to be heard, is considered violence because it disrupts the status quo. But disrupting the status quo, upending a world of violence and dehumanization, ushering in an era of justice in which the poor are filled and the downtrodden uplifted – this is exactly what Jesus came to do, not with violence that only perpetuates dehumanization, but with self-giving love that reaches out to the love in all of us.

So whatever the verdict, we must speak to the humanity of the J20 protestors, the humanity of the immigrants, the humanity of refugees, the humanity of those on the receiving end of our bombs, the humanity of all on the underside of dehumanizing policies. We need to reach out in our humanity to all who would use their power to disempower others, recalling them to their humanity in the process. We must not be afraid to join movements that speak out for the humanity of others, from Black Lives Matter to anti-war marches. Our love must be bold, outspoken, vibrant and active, but nonviolent. Violence against any human person denies the image of God within them. And Christmas is about affirming God with us and finding God within us all. Welcoming the fully human one into our midst, we live into the fullness of our humanity, transforming the world with the Love in which we were created, the Love we were meant to be, the Love that Christ empowers us to become. Come, Lord Jesus, and show us how to be human.

December 21, 2017
The Last Jedi and the Futility of Violence
Next Post