Sermon: Don’t Let Violence Sneak Up on You and Catch You Off Guard! 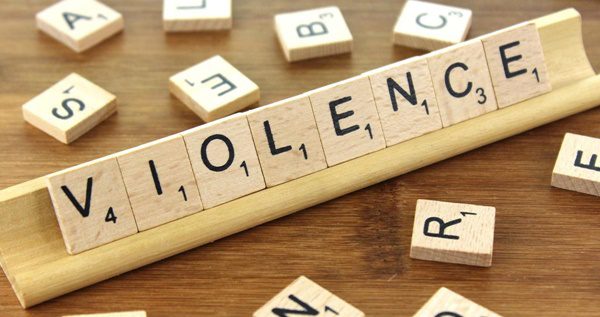 Violence is always the human temptation.  We think it will deliver us from evil but when we engage it, it only sinks us deeper into evil’s mire.
-Rev. Tom Truby

Don’t Let Violence Sneak Up on You and Catch You Off Guard!

When they put Jesus to death they didn’t know his death would set his message into motion.  With his death, God’s resurrection power of forgiveness and compassion could now be revealed.  The unveiling of truth is the meaning of apocalypse, not some God-driven cataclysmic destruction of the world.

The disciples had seen resurrection power already in Jesus’ life in his healings and casting out of demons.  His life had been like a fig tree in spring whose leaves had begun to appear and whose branches promised much fruit as summer comes full term.  Something new was at the gate and they are going to see it come in, he said. The power of his coming was as dramatic as the sun being darkened and the moon ceasing to give light.  The effect of his coming was equivalent to the stars falling from heaven, shaking the world’s foundations to the core.

The Son of Man was coming and he will gather his people from all the corners of the world.  No one will be excluded. Someday, when he comes again, everyone will see it but for now we see it. We don’t know when everyone will see it. No one knows but the Father. But we do know he will come a second time in fullness.

In the meantime, while we wait, “Beware, keep alert; for you do not know when the time will come.”   “It is like a man going on a journey, when he leaves home and puts his slaves in charge, each with his work, and commands the doorkeeper to be on the watch.”

The man gone on a journey is the boss-man and Jesus has gotten into his world with his message of forgiveness and compassion while the boss-man was away. The boss man thinks the way of violence, blaming and power are necessary to keep the world from exploding.  His slaves, those who he thinks have no choice but to do his will, have been put in charge. Each of the slaves has had work assigned to them and the boss-man assumes they each will do what they have been told.  He gives the doorkeeper the task of watching for his return. The doorkeeper becomes the sign of the fear-driven life. Everyone knows if the boss-man returns and finds his slaves asleep they will be in big, big trouble.  They live in fear of him, their slavery animated by fear. No love in this house!

But while the boss-man is away those impacted by the resurrection are subverting the boss-man’s world.  They are living lives modeled on Jesus, they are forgiving their enemies and refusing to blame.  They look upon the least of the world’s people with compassion and love, just like their Lord, because they know how the boss-man’s world works. It was revealed to them in the crucifixion.

When we hear the parable of how the boss-man commanded the doorkeeper to be on watch, we think it is God who has left us, told us to fearfully work, and warned us that upon his return he had better find us doing what we were told.  We quiver as we watch the door and dread his return.

But what if it’s not God who threatens but human violence instead?  Isn’t that the thing we all worry about the most?  It’s not God’s supposed violence but our violence unleashed on the world that keeps us awake at night.

The master of the house who always threatens to return is vengeful, retributive, and violent but not the God revealed by Jesus.  No, to see Jesus’ God we have to turn the image downside up where love is the force for life.  The returning master is the world’s way, tempting us to violence.  Violence is always the human temptation.  We think it will deliver us from evil but when we engage it, it only sinks us deeper into evil’s mire.

Keep awake and do not be seduced or deceived.  The world wants us to be drowsy and agreeable to its agenda as it sweeps us toward our own destruction.  The world doesn’t love us but our creator God does. We never seem to learn.

The only way we can avoid going down the well-beaten path toward violence is to remain awake to the power of forgiveness.  And the best way for doing that is in keeping the death and resurrection of Jesus in mind.  His death at our hands revealed the allure of violence for it caused us to kill the Son of God.  When he forgave us and God resurrected him, we discover forgiveness as the only alternative to violence for it is the one response that does not spread it.

The temptation to violence comes suddenly, like the boss-man returning from his journey when we least expect him.  Anger erupts within us and our tongue and body want to exact revenge for a wrong felt, a hurt experienced, a word that cuts, or cuts across our values and we react in violence.

Recently Laura and I went to a film entitled “Loving Vincent.”  It was based on the life and death of Vincent Van Gogh and done in his painting style with thick swirls of color and generous dabs of vivid paint creating an artistic impression.  It took a hundred artists to create the film using Van Gogh’s paintings linked together sequentially to form the story of his life.  Van Gogh, brilliant, bipolar and life-challenged, could never hold a regular job.  Instead, from the age of 29 till his death at age 37 he painted continuously.  Only one of his eight hundred paintings sold during his lifetime and so he was so poor he couldn’t afford his paints and rent.  His brother, though struggling to make ends meet for himself and his family, provided for Vincent as best he could.

The temptation to violence comes suddenly.  Adrenalin flows and the tongue and the body want to exact revenge.  The only antidote I know is to stay awake to what Jesus revealed on the cross when he exposed revenge and violence for what it is and to forgive as quickly as the impulse to violence shows itself, for this is the message of the resurrection.

“What I say to you I say to all: Keep awake.” It is good advice for nations, for kings, and for us all. Don’t let violence sneak up on you and catch you off guard. Amen.

December 5, 2017
Racism and Responsibility Through the Lens of Mimetic Theory
Next Post

December 7, 2017 Trump and Jerusalem: What Jews, Christians, and Muslims Need to Know
Recent Comments
0 | Leave a Comment
"Church is boring."
Ivan T. Errible The Poor Own The Kingdom — ..."
"" … and the Word became Flesh." That "Word made Flesh" is Jesus Christ.Furthermore, if ..."
Ocelot Aardvark Why You Should Run from “Bible ..."
"nice article."
Brandon Roberts The Gospel is Countercultural: Politics, Palestine, ..."
"What cave do you live in?"
Monday's Child The Left Hand of God – ..."
Browse Our Archives
Follow Us!

What Does The Bible Say About...
Religion Prof: The Blog of James F. McGrath
Related posts from Teaching Nonviolent Atonement

The Space Between The Notes (A Poem About...
On the night that Ellis Marsalis died, You reminded me that Music...
view all Progressive Christian blogs
What Are Your Thoughts?leave a comment
Copyright 2008-2020, Patheos. All rights reserved.