Jesus Came to be Baptized: The Nonviolence of God

Jesus Came to be Baptized: The Nonviolence of God February 21, 2018 Tom Truby 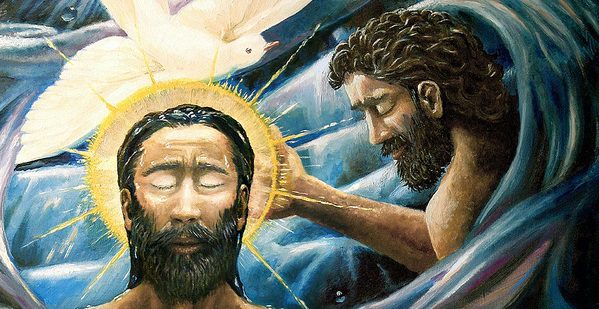 This has been a week full of Olympic Winter Games in South Korea.  We have been watching skaters leap into the air, briefly defy gravity and then return to the ice with grace and beauty or with awkwardness and pain.  Like the skaters at the Olympics, in writing this sermon I have taken bold leaps in my attempt to understand Jesus and the Gospel message.  Have I soared and landed with a display of beauty and truth or have I lost the edge and fallen on my face?

Nazareth was an impoverished hill town in the interior of Galilee where the poor lived, those the rest of Galilee excluded. A Galilean who lived by the sea asked, “Can anything good come out of Nazareth?” The question suggests no one should expect much from Nazareth.  Those people aren’t worth much. And yet those people were Jesus’ people and he was one of them. Galilee had some beautiful places where the water lapped against the shore but the text makes it clear this was not the place from which Jesus came. He comes from the bottom of the culture, the place where people really know about being shoved aside.

John, on the other hand, made his base at the River Jordan because the people of the Exodus had entered the Promised Land through the Jordan. From John’s point of view, they had crossed over, settled the land, and then promptly forgot their covenant with God. In God’s “anger” he had withdrawn his protection and allowed them to be conquered. This was John’s theology.

But God had made a covenant and was not done with them.  He was about to return and starting from the Jordan River, would reinvade in a war between good and evil.  The people could participate in the battle by allowing John to baptize them. Baptism protected them from God’s wrath by cleansing them of their sin, making them pure enough to join God in this cosmic fight.

John believed this whole battle sequence between good and evil was soon to happen. How many movies can you think of that carry this theme?  And each movie competes with the last to see which can be the more graphic.  John’s baptism was a way to sign up for this epic struggle. He was wildly popular with people coming from Jerusalem and all the cities and villages of the land to enlist.

In the midst of this excitement, when it was most popular to enlist, and just before the authorities clamped down and imprisoned John, Jesus came to be baptized. This was a unique and short-lived time and Jesus’ coming underscored the need for change. But Jesus has a vision much larger than John’s that he thinks will show the nonviolence of God while undercutting the power of violence over the human species.

Jesus agrees that God is about to act, but his saving act will be nonviolent.  It has to be or it won’t work.  Violence only leads to more violence. Jesus knows the only response to violence that works is forgiveness and that comes at a cost. Jesus will symbolically cross the Jordan and bring a new wisdom to all humanity.  Not only will he bring a new wisdom, he will allow himself to be put in the position where he can offer forgiveness; a forgiveness that counters and undercuts all violence.

Having decided this he enters the waters and John’s strong hands of retributive violence push him under the flood of violence that washes through history.  On the cross at the end of Lent and after forgiving us, he will drown in our violence but three days later God will raise him up.

But is he right to interpret history through this lens? No one in history had ever viewed things quite like this. Violence had always been seen as the energizer, not non-violence. He was taking a huge risk; testing his faith in his non-violent God few others could see.

“And just as he was coming up out of the water, he saw the heavens torn apart and the Spirit descending like a dove on him.”  The power to tear open the heavens combined with the gentleness of a dove – what a symbol.  Better the heavens torn than a fellow human being, or maybe 17 of them, unless the count has changed overnight (The number killed in this week’s school shooting in Florida).  This tearing apart reveals the truth of a nonviolent and fully benevolent God who does not pit us against each other.

The young man who did the shooting is loved. He didn’t need to strike out in violence to show his disappointment and rage with the world.  He was loved and he still is. The truth is with the heavens torn apart, a dove descends, not a drone or a warhead or even distorted logic meant to justify violence.  A dove: could there be a gentler, more compelling symbol?

“And the Spirit immediately drove him out into the wilderness.”  This Spirit that came looking like a dove drove him into the wilderness.  Why?  Was the testing a kind of necessary tempering to harden his resolve?  You may have a plan that gives humanity a way out of their predicament but do you have what it takes to carry it out?  It’s tough to go against what everyone else says: your neighbor, family, even many of your religious leaders are saying and believe that God is non-violent. So Jesus has to go through an ordeal to be sure he can maintain his edge against the abrasion of how the world thinks.

“He was in the wilderness forty days, tempted by Satan; and he was with wild beasts; and the angels waited on him.”  The people of the Exodus were in the wilderness for 40 years.  In both cases they have an opportunity to look at themselves, sort truth from fiction and face the ways they use excuses to evade their own growth. It’s hard to let go of our hurts, our victimage stories, and our identities built on being the victim even if the payoff is our own freedom.

A voice within Jesus that Mark calls Satan says, “Give it up Jesus.  You can’t save humanity.  Live for the day and go with the culture.”  And “the wild beasts;” I see them as vengeful impulses, lusts that have been so prevalent in the news of late and our untamed desires.  They come from those primitive places within us that haven’t submitted to discipline. I am angry, feel ignored or left behind and so picture myself with a submachine gun getting even with the world.  My generation largely fantasied these things and enjoyed seeing them play out on the silver screen but now, it seems, the wild beasts have gotten bolder and demand they be literally acted out.

“Now after John was arrested, Jesus came to Galilee, proclaiming the good news of God, and saying, “The time is fulfilled, and the kingdom of God has come near; repent, and believe in the good news.”

John’s message of a pure and holy violence pitted against an impure and evil violence hasn’t worked. It has only gotten him arrested and taken off the stage.  But with John’s departure Jesus steps up.  He has a message that does work. It involves good news that delivers us from violence; the kingdom of God that has no room for rivalry, and the conditions making it possible for us to see it, having been fulfilled. When Jesus uses the word “repent,” he means repent of violence and believe the good news of the nonviolence of God and of his kingdom built on forgiveness and compassion.  Amen.

Image: Flickr: by Waiting for the Word, Baptism of Christ 10, Creative Commons License, some changes made.

February 19, 2018
Sermon: Swimming through the Flood - Guns, Violence, and US Politics
Next Post

February 22, 2018 Jesus At The Border
Recent Comments
0 | Leave a Comment
Browse Our Archives
get the latest from
Teaching Nonviolent Atonement
Sign up for our newsletter
POPULAR AT PATHEOS Progressive Christian
1