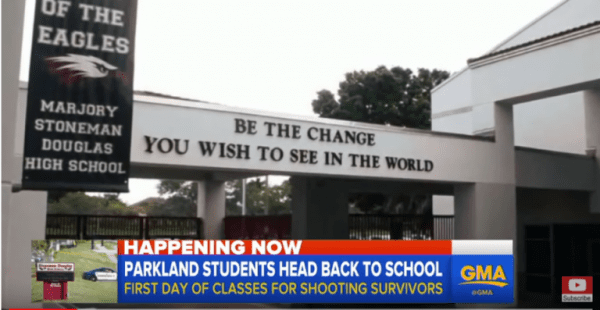 Recent developments in the gun control debate make me cautiously hopeful that our nation may be on its way toward curbing and maybe even transforming our violence. But that means there is a special urgency in this moment that we must channel toward understanding, compassion, and repentance.

First, the hope: The amazing students at Marjory Stoneman Douglas High School of Parkland, Florida, have made more progress on the issue of sensible gun restrictions in the past two and a half weeks than I have ever seen in my lifetime. Their indefatigable spirit has ignited the nation’s conscience and stirred our passion. Even before national legislation is passed, the bold leadership of these youth is leading to tangible results as Dick’s Sporting Goods, Walmart and Kroger have all announced that they will no longer sell guns to anyone under the age of 21. As they mourn their classmates and teachers and face the challenges of their own grief, injuries, and trauma, the action these young leaders are taking – action that is no doubt a part of their own healing process – has the potential to help heal a broken, violent nation.

But so much more work needs to be done.

The Mimetic Elements of the Gun Debate

Inevitably, as the issue of gun control takes center stage in the national spotlight, gun rights activists and politicians are raising their voices as well. Where some are calling for restrictions on guns, others, most notably President Trump, are advocating for arming teachers, which some schools are doing already.

I would not characterize the gun control debate as a strict mimetic rivalry, because there is a spectrum of ideas concerning gun rights and restrictions, not just two opposing sides. However, the national conversation on gun control tends to polarize people on different sides of the spectrum, and there are mimetic elements to this conflict. Though parties on either side of the gun debate want different policies enacted, they share a desire to shape the narrative on guns and the role they play in the vulnerability and security of society. And parties on either side of the gun debate characterize the other side as ignorant, naïve, or even dangerous. The call to arm teachers has polarized those who believe that such a measure would be the ultimate protection against those who see it as an invitation to disaster, with both sides accusing the other of failing to do what is necessary to protect children.

By highlighting the mimetic aspects of this conflict, I am not drawing a moral equivalency between gun control and gun advocacy. My own position goes beyond gun control; I believe in disarmament. I believe a nation armed to the teeth, arming other nations to the teeth for the profit of an elite few, and defending its right to make war all over the world under a false veneer of freedom and democracy, is on a self-deceiving and self-destructive path that could take the world down with it.

Mimetic theory can be a helpful prism through which to view the gun debate as it reminds us how easily conflict escalates, and how quickly opponents can dehumanize each other in their pursuit of their shared goals – in this case, control of the narrative and policy surrounding guns. I am no exception. I believe that defenses of our inadequate gun laws and the desire to further arm the citizenry and eliminate gun-free zones in the wake of another mass shooting are dangerous, and I must remind myself that most people who believe in these measures do have the safety and security of the nation on their hearts and minds just as I do. (I will not deny that others are motivated by profit. Gun manufacturers, the leadership of the NRA that speaks for them, and the politicians to whom they contribute all profit from weapons proliferation, and though I try to refrain from judging their hearts, I can’t refrain from using my brain to recognize that safety is not their sole priority). While focusing on the need to disarm, the temptation to consider gun rights advocates as enemies is self-defeating.

As long as fear and enmity fuel the gun debate, guns will win.

It may seem naïve to bring compassion to a gun fight, but compassion, empathy and understanding are essential for disarming our fears and transforming our culture of violence. As long as the underlying question of the gun debate is “How do we protect ourselves?” there is an implicit fear of others from whom we must be protected.  We should not be naïve about the dangers of the world, but the idea that lethal force is needed to protect us from those dangers is both a catalyst and a cog in the ever-turning cycle of violence.

There is a deeper truth, the truth that life is grounded in Love and humans are made in the image of Love. While this is not a universally acknowledged truth, those who believe it because of their faith in God, humanity, or both, have a responsibility to live according to that faith. This means living according to the principle that all people, no matter how flawed, are redeemable, and the taking of life is anathema. Grounding one’s self in this principle may not lead everyone to total pacifism, but it should cause us to question the “right” to bear arms and the conflation of lethal force with self-defense.

If we are guided by the principle of unconditional human dignity and redemption, then we can change the narrative concerning guns. And changing the narrative is essential not only for reducing the proliferation of deadly weapons, but for reaching into the heart of our violence and transforming the violence in our hearts.

Steps for Transforming Our Violence

We need to transform our most pressing question from “How do we protect ourselves?” to “How do we transform the violence in our communities, our nation, and our world into the cooperation we need to heal our dying planet and build life that thrives rather than shrivels in the shadow of fear?” That requires listening and building trust in one-another, and that requires at least four steps.

These are the steps that I can think of for transforming our nation of violence and re-thinking our “right” to bear arms. We must alter our understanding of “self-defense” to recognize that it cannot mean lethal force, because our well-being cannot come at the ultimate expense of anyone else. Not only does taking life fuel the cycle of violence, distrust and fear, but it also robs us of our own well-being as interconnected interdividuals, built for relationship with, not over and against, one-another.

These steps will take time. In the meantime, there may be quicker elements of gun control that can be implemented, and they can make a difference, but they will still be enforced by a violent government with a history of disarming the marginalized and therefore subject to skepticism, and they will most likely be offset by counter-movements by gun rights activists. The most meaningful changes will not occur until we change the nature of fear and enmity that drive our nation to war and to arms. It is time to disarm fear with love.

March 7, 2018 Sermon: The Temple Becomes a Person
Recent Comments
0 | Leave a Comment
Browse Our Archives
get the latest from
Teaching Nonviolent Atonement
Sign up for our newsletter
POPULAR AT PATHEOS Progressive Christian
1