How Progressive Christians Can Reclaim John 3:16 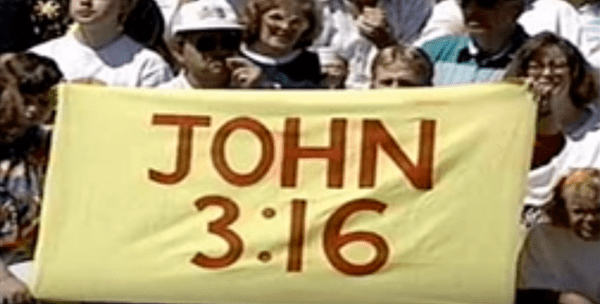 The following is an interactive sermon I led at Clackamas United Church of Christ, near Portland, Oregon. The congregation discussed the most famous Bible verse, John 3:16. The video recording of the sermon is below, along with my reflections.

They say that familiarity breeds contempt.

Maybe the most familiar verse in the Bible is John 3:16. You never see a sign for the verse that says, “Jesus wept” at football stadiums.

Progressive Christians have become so familiar with this passage that we treat it with contempt. At least I do. Whenever I see those signs during a football game, I roll my eyes.

That’s because the verse emphasizes belief. “For God so loved the world that he gave his only Son, so that whoever believes in him shall not perish, but have eternal life.”

The emphasis on belief troubles many Progressive Christians because it seems like we have to make an intellectual assent to certain Christian dogmas.

But what if I told you that there’s a different way to interpret this verse?

In the original Greek, the word for “belief” is pistis, which can be translated as “belief,” but it can just as easily be translated as “trust.” If we were to translate pistis as “trust,” how does that shift the meaning of the passage for you? Here it is in the context of John 3:14-21.

And just as Moses lifted up the serpent in the wilderness, so must the Son of Man be lifted up, that whoever trusts in him may have eternal life. “For God so loved the world that he gave his only Son, so that everyone who trusts in him may not perish but may have eternal life. “Indeed, God did not send the Son into the world to condemn the world, but in order that the world might be saved through him. Those who trust in him are not condemned; but those who do not trust are condemned already, because they have not believed in the name of the only Son of God. And this is the judgment, that the light has come into the world, and people loved darkness rather than light because their deeds were evil. For all who do evil hate the light and do not come to the light, so that their deeds may not be exposed. But those who do what is true come to the light, so that it may be clearly seen that their deeds have been done in God.”

Does the change from “belief” to “trust” change anything for you?

But what about this condemnation business? There seems to be a tension in the passage. God didn’t send Jesus to condemn the world, but to save it. But then it says that those who do not trust in Jesus are already condemned. What is that about?

But the passage clearly states that some are condemned. But who is doing the condemning? Not God. We are already condemned because we condemn one another.

That’s why Progressive Christians need to reclaim John 3:16. “God so loved the world that he gave his only Son, so that everyone who trusts in him may not perish but may have eternal life.”

God loves the world. And to show God unconditional, universal love, God sent Jesus, not to condemn, but to save. Jesus didn’t come to violently punish the world, but to show God’s nonviolent love. God’s nonviolent love is ultimately revealed when Jesus was high and lifted up on the cross, like Moses bronze serpent. That’s where we ultimately see that God doesn’t respond to human violence with more violence; rather, God responds with divine love and forgiveness. “Father, forgive them, for they know not what they do.”

The only question left for us to answer is if we trust and follow Jesus in his radical commitment to God’s nonviolent, universal love. For it’s in God’s nonviolent love where we find eternal life.

March 7, 2018
Sermon: The Temple Becomes a Person
Next Post

March 13, 2018 Sowing Seeds of Love: My Daughter Wrestles with a Sunday School Parable
Recent Comments
0 | Leave a Comment
Browse Our Archives
Follow Us!