The Land And Its Promise for Palestinians and Israelis 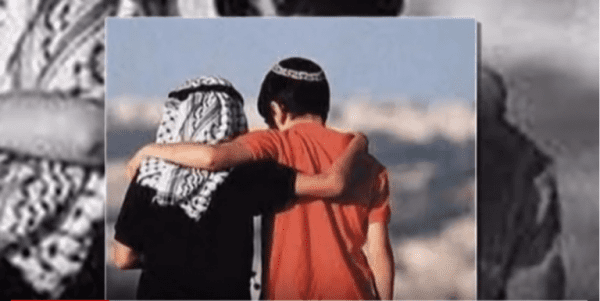 How much violence could be deterred, how much suffering averted, how much pain and grief and anguish and humiliation could be replaced by love, compassion, connection and affirmation, if only we understood the all-encompassing embrace of God’s complete and unconditional love!

My colleague, Adam Ericksen, and I are observing the Easter season by delving into Dr. Anthony Bartlett’s transformative Bible study, Seven Stories: How to Study and Teach the Nonviolent Bible. Each of the seven weeks from the resurrection until Pentecost, we explore a story – a theme of scripture – leading us on a trajectory out of the human prison of violence and into the liberating new life of God’s peace. Seven Stories illuminates the path traced through scripture along which God leads humanity from exclusion to inclusion, rivalry to reconciliation, enmity to embrace. It shows how we ourselves are being led out of our conflicts and into new community and new relationship, thoroughly transformed by Love.

The next story we will cover in this series, “The Land and Its Loss,” explores the role the land – a common place in which to take root and develop a history – plays in the relationship God builds with humanity and the gradual revelation of God’s character and the transformation of our understanding. As I consider the “promised land,” I cannot help but consider all the love and hate, violence and conflict, shared love for and conflicting understandings of God bound up in this land and her people. I find myself wishing that everyone in Israel and Palestine – residents in the land and refugees in the diaspora, supporters of one exclusive side or the other, and all who pray and yearn for peace in the region – could understand the full nonviolence and nonrivalry of God that Seven Stories illuminates. Understanding the all-embracing love of God illuminates the role of the land as God’s soil in which to plant seeds of nonviolent revelation rather than an exclusive territory for some at the expense of others.

Right now the soil of the promised land is saturated with blood. The birth of the state of Israel, understood as a necessary and (to many) God-ordained homeland for hundreds of thousands of displaced and persecuted Jews in the wake of the Holocaust, displaced hundreds of thousands of Palestinians in its creation. Palestinians resented and resisted the conversion of their land into the state of Israel, and many today do not accept the legitimacy of Israeli statehood. Over the generations, the state of Israel has expanded, with settlements puncturing and dividing the Palestinian territory of the West Bank. The Gaza strip, though Palestinian land, is completely blockaded by Israel, and mobility, electricity, water and resources are restricted. Mutual distrust and enmity flow between Israel and Palestine as each make broad and often exclusive claims to the land. Violence flares as well, on both sides, but the power and ability to inflict the most damage lies with Israel.

So much controversy stems from the vision of Israel as a promised land exclusively for a “chosen people,” understood to be the Jewish people. But, while acknowledging the historical and religious importance of the land to the Jewish people, Seven Stories turns the concept of “chosen people” upside-down right from the beginning by showing that the origin of the term “Hebrew” is based not on racial descent, but on a social status of oppression. God chose not a race but a loosely affiliated group of displaced and dispossessed people through whom to reveal the scriptures – to reveal God’s just and nonviolent character and begin humanity on a journey out of violence toward peace and perfection of love. The “Hapiru,” a “loosely defined, inferior social class composed of shifting and shifty population elements without secure ties to settled communities” (Seven Stories, 51), did eventually evolve into the Hebrew/ Jewish people with their ties to the historic land of Israel/Palestine, but the point is that their “chosen” status is based not on their ethnicity, but on their experience of oppression. God chooses to include and work through the marginalized and excluded.

What this means is that the oppressed, the persecuted, the excluded and turned away, the displaced and refugees from all wars and conflicts, are God’s chosen people. And they are chosen not over and against anyone else, but chosen for the purpose of showing the limitless reach of God’s love. They are chosen by God precisely because the world refused them, to teach us not to refuse anyone. The blessing of Abraham, whom God called out of his homeland and into a new land, was a blessing to be a blessing to all the nations and peoples of the world. That blessing is the honor of being the vehicle through which God reveals all-encompassing love to everyone, without exception.

A wandering, dispossessed people need a common space in which to form an identity, and in scripture, God guides the Jewish people into a land in which that identity, through God’s guidance, can be formed. Remembering the oppression of the Jews in Egypt, and understanding the meaning of “Hapiru” as those who are excluded and displaced, we can best understand the promised land as a liberated people’s experience of all that had previously been denied – home, rootedness, inclusion. Dr. Bartlett writes, “[The land] is the tangible evidence of God’s favor and justice, and must always be understood this way.” (Seven Stories, 98). Tomorrow’s podcast will delve deeper into the relationship between the Hebrew people and the land, and how the land served as a vehicle for the peoples’ developing understanding of their relationship with God.

Yet the land should not be seen as the exclusive territory for an exclusive people, especially when it serves the purpose of rooting a previously excluded people in an understanding of a fully inclusive God. The irony of the land of Israel/Palestine right now is that the dispossessed Palestinians, those living without full rights in the Palestinian territories and those living as refugees throughout the diaspora, are God’s chosen people as well. For in all times and places, God chooses to make God’s love known through the marginalized and persecuted. This does not mean that God un-chooses anyone, or that anyone loses the blessing of God in order for others to be blessed. No, God is a God of inclusion, working on the expansion of our hearts so that we, made in God’s image, can embrace the whole human race.

What this means for the land of Israel and Palestine is that God blesses the wandering and dispossessed, and a refuge from violence is part of that blessing. But that refuge should come not through displacing others, but through God’s work in human hearts to transform violence to forgiveness and compassion. God’s character of nonviolence and perfect love has been misunderstood and misrepresented by members of all religions, very much including Christianity. If Christians had fully understood God’s nonrivalrous, nonviolent, revolutionary love, they would not have persecuted Jews, let alone committed atrocities of slavery and genocide and colonization. Nevertheless, at the time Israel was created, Jewish people the world over felt the need for a safe haven, away from persecution, violence, and hatred. A political campaign that had begun generations ago to establish a Jewish holy land in Palestine was bolstered by the circumstances of the time and the historic and religious ties of the people to the land.

What this means is that the displacement of the Palestinian people – the creation of refugees by refugees – is as much a matter of antisemitism as it is the political and religious philosophies of Zionism. Failure to understand the all-inclusive love of God has turned the holy land, the cradle of a growing and developing nonviolent humanity, into a hotbed of violence, though the love of God and God’s beloved people still flows through it. There should be room for Jews, Christians and Muslims, as well as people of every other faith and no faith at all, people of every ethnicity and nationality, living in the holy land and throughout the world side-by-side.

The fulfillment of the land’s promise is a renewed humanity, molded by God’s love into a community where all embrace all, the whole world over. May it soon be so. Amen.

Editor’s Note: To delve deeper into the meaning of the land for the Hebrews in Biblical times, as well as the role it played in shaping their understanding of and relationship with God, join Adam Ericksen and me Monday, April 16th, at 10:00 CT for our live chat on Anymeeting. We will focus on how God used the land to form a bond with and show blessing to the Jewish people, and if we have time we will talk about how we are to understand that history, and what it means to be a “chosen person of God” in light of Israel and Palestine today.

Image: Screenshot from Youtube: “Israeli and Palestinian Friends Come On People Smile on Your Brother,” by Kathleen Helen Walker.

April 12, 2018
Jimmy Kimmel, Sean Hannity, and How to Save Our Souls
Next Post