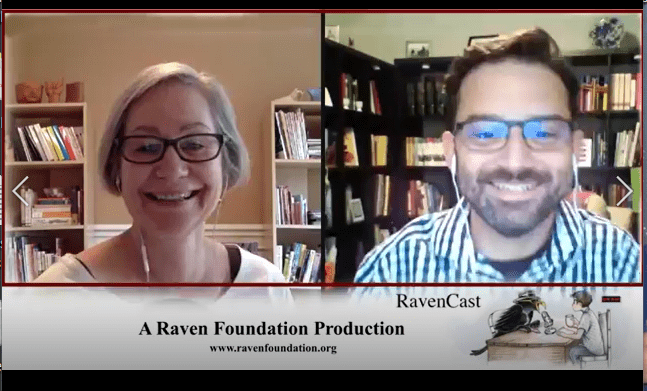 In this episode of the RavenCast, Suzanne Ross and I discuss Islamic holy month of Ramadan, Islam, and mimetic theory. You can watch the video of the conversation below, or you can subscribe to the RavenCast on iTunes, Stitcher Radio, or Podbean.

During Ramandan, Muslims who are physically able fast from dusk to sunset. The fast is to help Muslims get closer to God and closer to those who are vulnerable from lack of food. This identification with the vulnerable is to lead Muslims to identify with and care for those on the margins of culture.

The Time of Muhammad

Muhammad saw the oppression that this theological system caused. Soon, he received revelations from Allah. Part of the revelation was that Allah is not somewhere else far away and indifferent to world affairs. Rather, Allah is present in the world and cares deeply about the poor, weak, and oppressed.

Muhammad’s mission was to transform a theological system that supported the status quo. He was born into the Quraysh tribe, which was the most powerful tribe in Arabia. When he confronted the leaders, they tried to kill him. But during his time in Mecca, Muhammad responded to the violence against him with nonviolence. Many Muslims, including Abdul Ghaffar Khan, Rabia Haris, and many others, claim that Islam calls Muslims to nonviolence.

Islam and Mimetic Theory: A Return to the Archaic?

In contrast, revealed religions do have elements of the archaic sacred within their sacred texts, but what makes them a revelation is that they have the elements only to deconstruct them with the true God who is only love, mercy, and who only desires peace.

When it comes to Islam, those involved with mimetic theory shouldn’t be surprised if there are elements of the archaic sacred within Islam. The question is whether those elements are deconstructed by a revelation of the true God who only desires love, mercy, and peace.

Islam does deconstruct the archaic sacred through its fundamental theological concept, Tawhid. Tawhid refers to the “Oneness” of God. Islam scholar Michael Sells states that Tawhid means that God has internal consistency. God oneness means that there can be no conflicting wills within God, otherwise the Tawhid of God is broken.

God’s Tawhid is Mercy. 113 of the 114 chapters of the Qur’an begin with the phrase, “In the name of God, the most Merciful, the most Compassionate.” These are the reading instruction that the Qur’an gives to us in order to interpret the Qur’an. The Qur’an tells us to read it through the lens of mercy and compassion. That’s because God is Mercy and Compassion.

May 21, 2018 A Terrible Theory About the Terrible Twos: Countering the Idea of Counterwill
Recent Comments
0 | Leave a Comment
"" … and the Word became Flesh." That "Word made Flesh" is Jesus Christ.Furthermore, if ..."
Ocelot Aardvark Why You Should Run from “Bible ..."
"nice article."
Brandon Roberts The Gospel is Countercultural: Politics, Palestine, ..."
"What cave do you live in?"
Monday's Child The Left Hand of God – ..."
"The best of doctors are destined for Gehenna, and the worthiest of butchers is Amalek’s ..."
Nimblewill The Christian Doctrine that Leads to ..."
Browse Our Archives
Follow Us!