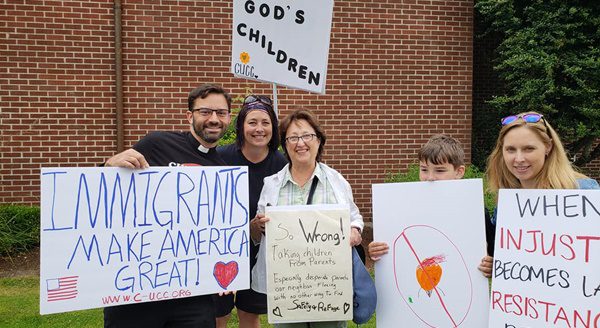 There’s a truth about being human that I would rather avoid. And that truth is that I’m vulnerable.

I pretty much hate this fact.

Maybe you would rather avoid this truth, too. But it’s true. I’m vulnerable. I’m vulnerable to being sick. For example, I just caught a summer cold and have an annoying tickle in my throat. I hate having a cold.

I’m vulnerable in my family. Yesterday morning I had a dream about one of my children. I left one of my sons in a room with some of my clergy colleagues in our conference. My colleagues said they would care for him as I left for the bathroom. When I came back they had him tied up in a chair with duct tape over his mouth. They were scolding him as I ran into that room. So I pushed them out of the way and held him in my arms. Now I trust my clergy colleagues, but the dream was about my vulnerability as a father with three vulnerable children, and a vulnerable wife.

And maybe you also feel vulnerable. There’s a cancer diagnosis. There’s divorce. There’s a loss of a job. There’s loss of a beloved spouse or friend.

And at this moment in our history, our nation feels vulnerable. The Supreme Court vacancy has left many of us with a lot of questions and anxieties, particularly surrounding advances made in women’s health and our beloved LGBTQ family members.

And in the back of our minds, as we celebrate the 4th of July this week, we know that children are some of the most vulnerable among us, as we’ve seen our own government separating children from their families and refusing to take responsibility to reunite those families.

So, maybe it’s true that we’re all vulnerable. But for some reason we would rather not admit this truth. I’d rather believe that I have it all together. And I’d rather you believe that I have it all together, too. I don’t want you to know my fears that at some point you will discover that I’m a fraud. That I preach love of neighbor and of enemies and the importance of forgiveness and treating people as I’d like to be treated, but so often I find myself failing and feeling like a total hypocrite.

And then I need to remind myself to take a deep breath. Breathe. Because I have warts and scars and fears. They are part of who I am. I’m vulnerable because I’m human. And the best way, maybe the only way, that I know deep in my bones that I’m loved is to be open about my vulnerabilities. Because when I hide them, I hide myself. And when I hide myself, I’ll never know that I’m fully loved for who I fully am.

I think this is part of the message of our Gospel passage this morning. Jesus meets three vulnerable people who run to him in desperate hope for an act of love.

I want to emphasize two of those people today – a dad and his 12 year old daughter. The dad’s name was Jairus. He was a man who seemingly had his life together. Jairus was the president of the local synagogue. This meant he was a man of privilege. He had money and power and social influence. He was a highly respected leader of this community.

He had all the advantages that his culture could provide, and yet those advantages meant nothing when his daughter fell extremely ill to the point of death. Jairus loved his daughter, and this love left him vulnerable to the pain and the heartache of losing her.

Because of a women’s health issue, the forces of death were about to separate this family. And so with desperate hope, Jairus ran to Jesus and fell at his feet. Imagine the tears rolling down his cheeks in all of his vulnerability as he begged Jesus repeatedly, saying, “My little daughter is at the point of death. Come and lay your hands on her, so that she may be made well.”

Jesus knew two things. First, that women matter. That women’s bodies and their health matter. And second, Jesus knew that nothing, not even the forces of death, should be allowed to separate families. All families belong together. And so Jesus went with Jairus to heal his daughter.

But Jesus didn’t make it in time. They received word that Jairus’s daughter died as they walked to his house.

Jairus hung his head in sorrow. But with great compassion, Jesus said to the man, “Do not fear. Only believe.” The crowd at Jairus’s house laughed at Jesus when he said there was hope for the girl. But Jesus didn’t listen to the mocking crowds, for he knew that God’s desire heal all people, especially women, and to keep families together is stronger even than the forces of death.

Jesus said to the man, “Do not fear. Only believe.” And I have to tell you, there are times that I am afraid and that I struggle to believe. Here we get to the part in this sermon that I don’t know how to preach. Because like Jairus, I do go to Jesus begging for a miracle and I’m often left disappointed. I didn’t get the miracle of Jairus’s daughter. And so what do we do with that?

The best I know is to say, Jim, I love you. And I’m with you. And this church is with you.

And I love Amy and Gary and Judy and Rhonda and Heather and Jodi and all of you who are suffering from the loss of a loved one or an illness or difficult family relationships. And you know what? That’s pretty much all of us.

And I’d like for Jesus to perform some miracle right on our national stage so that we live out his command to welcome the stranger and to care for women’s health, and protect the gains we’ve made for our LGBTQ family members.

Because we’re all vulnerable. And so I read this story and part of me wants to shake my fist at God, yelling at God to perform some miracles for us now.

I don’t know, but maybe there’s another miracle in the story for us. Maybe the miracle is the vulnerability of Jairus. He wasn’t afraid to show his fear amidst a crowd and come to Jesus. He believed that in his vulnerability and his pain, that Jesus might care about him, his daughter, and his family.

And maybe that’s the miracle for us. Women’s bodies matter. The LGBTQ community matters. Families matter and belong together and many of us, along with hundreds of thousands of people from Seattle to New York and from Cheyenne, Wyoming to Jackson, Mississippi, marched against the forces of evil and death yesterday. We marched to keep vulnerable immigrant families together. And we, the members of the church, are also a family. We have our vulnerabilities. If you are like me, you’d rather hide them. But we’re called to share our joys, hopes, dreams, along with our wounds, pain, and suffering. For when we do, we can hold one another by the hand, lift one another up, and it is there that we are able to find healing.

So in our continued struggle for justice for families, women, and our LGBTQ family members, may we know that Jesus struggles with us.

And may we be with one another working to heal, too. Amen.

June 29, 2018
Erin Wathen on the RavenCast - Resist and Persist: Faith and the Fight for Equality
Next Post