The Provocation of Love and the Four Horsemen of the Apocalypse 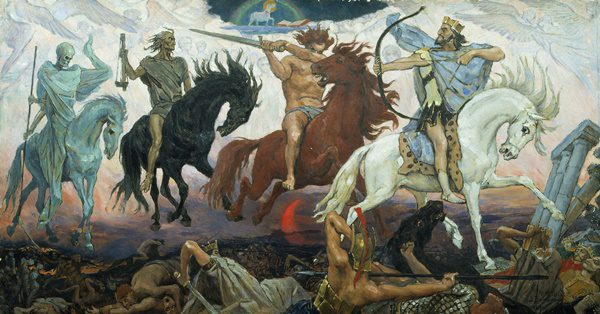 The Book of Revelation is weird. And it can be really scary.

Let’s start with that.

Many Christians throughout history have criticized Revelation. Martin Luther once said he thought it was “neither apostolic nor prophetic” because “Christ is neither taught nor known in it.”

I think it’s weird and has scary images, but I disagree with brother Martin. Here’s why –

In chapters 5 and 6, John has a vision of the heavenly throne room. There is a scroll with seven seals. The seals are locked and no one has the key to unlock them. And the key unlocks the way to understand the passage.

But then the Lamb of God who was slain comes into the room with the keys. The Lamb unlocks the seals and everyone rejoices! w00t w00t! The Lamb is the winner! What a hero!

Except when the Lamb unlocks the seals and opens the scrolls, something really scary happens. A voice from the mysterious living creatures in God’s throne room says, “Come.” And out of the scrolls emerge the Four Horse men of the Apocalypse. The Horsemen bring with them conquest, war, famine, and the plague of death.

If you are like me, you think this is getting a little weird and you might be asking a few questions. Like, why would Jesus, the Lamb of God who was slain, unlock a scroll that brings forth the Big Scary Four Horsemen of the Apocalypse? After all, they bring all the horrible things that people do to one another. Shouldn’t Jesus have kept the four Horsemen locked up? And why woulda voice from Heaven call them out to unleash destruction? It’s weird stuff.

Revelation doesn’t explicitly answer these questions, but I think looking at the life of Jesus gives us clues. In fact, Jesus is the key that unlocks the mystery behind Revelation.

Here’s what we know about the life of Jesus: His radical love provoked a violent response, as it continues to do today for anyone who challenges the status quote.

The key to life that Jesus teaches is love. What are the most important commandments? Love God and love your neighbor. In fact, for Jesus, all of the commandments boil down to love.

This isn’t a passive love. It’s active. It forgives. It heals. It feeds the hungry. And it flips over the tables of the status quo.

But we also know that in some sense, Jesus didn’t come to bring peace, but a sword. This was not a literal sword. Jesus said the Gospel was like a sword that would split families apart. Why? Because the love of Jesus subverts the political, economic, and religious status quo. And like the Four Horsemen of the Apocalypse, the status quo always fights back.

That can be pretty scary.

The status quo is scapegoating. That’s the primary sin Jesus came to save us from. Since the beginning of human history, we have created a sense of peace among ourselves by uniting against a common enemy. Notice that the real problem is that we have conflict among us. That conflict needs an outlet, otherwise we risk destroying ourselves. The outlet comes in the form of uniting against a scapegoat. If we don’t find a scapegoat, we could destroy ourselves.

The scapegoating pattern essentially looks like this: We know *we* are good and right because we know *they* are bad and evil. If we just got rid of *them,* then *we* would have peace.

The scapegoating pattern is a lie. It never leads to true or lasting peace. It only leads to a cycle that creates more enemies. But it has always been our crutch for creating “peace.” Whenever we have conflicts within our group, our default is to unite against a common enemy.

Jesus took that crutch away from us when he gave us the key to life. Which is love.

If you are like me, you would rather use the crutch of scapegoating. It’s easier. And unfortunately, it can still “work” as an outlet for our conflicts.

While scapegoating never leads to true peace, it does “work” to alleviate the conflicts within a group. The blood of our victim washes away our conflicts. That’s the whole point of sacrifice.

But Jesus takes the sacrificial crutch away from us with the key of love.

Which takes us back to the Four Horsemen of the Apocalypse.

The Four Horsemen are metaphors of the status quo of scapegoating violence that Jesus challenged with the key of nonviolent love.

Jesus took the sacrificial crutch away, but we keep grasping for it. We hobble along in our scapegoating as we stumble over one another with scapegoating in the form of racism, sexism, classism, and all other kinds of “isms.”  We must learn to walk. We must learn how to deal with our underlying conflicts and anxieties in ways that don’t scapegoat.

Jesus gave us practical advice – go directly to the person with whom you are in a conflict and talk with them. Work it out. Don’t gossip. And forgive70 times 7 times!

Jesus provides the antidote to scapegoating, but he doesn’t promise peace. In fact, when you challenge the status quo, it could lead you to the cross.

Here’s the point of Revelation: When you participate in the Gospel, it may not make things better. People might get provoked and turn against you because we all like our sacrificial crutches. Jesus warned us that fathers and sons might turn on one another. And indeed, like the early Christians, you might get persecuted.

But as Jesus warns us that all of this might happen, he also invites us to hold on to the Gospel of love. When people turn against you, do not become resentful. Do not scapegoat the scapegoaters. Rather, continue to forgive. Continue to work for justice through nonviolence. And continue love.

Because love is the key.

Image: The Four Horsemen of the Apocalypse by Vastnetov. Wikipedia. Public Domain.

December 17, 2018
To Shine a Light: A Conversation about Judaism, Hanukkah, and Growing Anti-Semitism
Next Post

December 21, 2018 Christmas Eve and the Call to Nonviolence: Girardian Virtual Bible Study Episode 4
Recent Comments
0 | Leave a Comment
"Church is boring."
Ivan T. Errible The Poor Own The Kingdom — ..."
"" … and the Word became Flesh." That "Word made Flesh" is Jesus Christ.Furthermore, if ..."
Ocelot Aardvark Why You Should Run from “Bible ..."
"nice article."
Brandon Roberts The Gospel is Countercultural: Politics, Palestine, ..."
"What cave do you live in?"
Monday's Child The Left Hand of God – ..."
Browse Our Archives
Follow Us!