The Christian Message of Masculinity Behind the Gillette Commercial 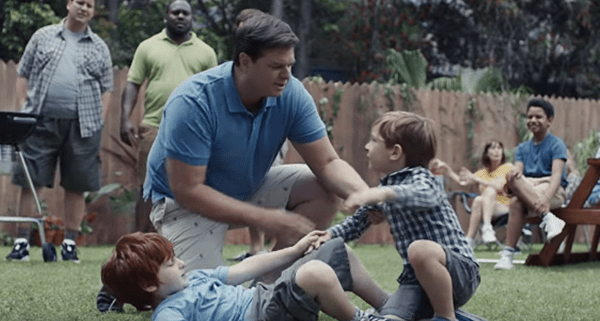 Gillette recently released their Superbowl ad and it is creating quite a controversy, especially in many Christian circles. But the message behind the commercial is thoroughly Christian. Maybe that’s exactly why some Christians don’t like it.

The commercial is titled “We Believe: The Best Men Can Be.” It starts with the words:

Is this the best a man can get?

It then shows a mob of teenagers chasing after a boy to beat him up. A mother comforting her tearful son. Old commercials of men sexually harassing women. A businessman mansplaining about a businesswoman’s comment. And a group of men at a BBQ justifying two boys fighting the with phrase, “Boys will be boys.”

Most of the criticisms stop at this point and accuse the commercial of portraying men in an excessively negative light. Some even claim that men are the victims of the feminist agenda and Gillette is simply parroting feminism.

Throughout the commercial, men and boys tend to follow the crowd. Gillette does not say that men follow the crowd because all men are stupid. Rather, men tend to follow the crowd because we humans are highly susceptible to influence. We will always follow someone. As social creatures, we will always associate ourselves with a group. The point is to be aware of the type of crowd we are following because, for good or for ill, the crowd will always influence us. Gillette understands this fact of being human. As the commercial ends, it states, “The boys watching today will be the men of tomorrow.” Or as René Girard put it, we are mimetic. We are formed by our group and we non-consciously imitate our cultural models.

Our culture is like a massive crowd, with different groups telling us what to do and what to think and what it means to be a man. For a long time, to be a man in our culture has meant to be tough and fight back. As the father of two young boys, I know our culture still gives boys a pass when it comes to violence and bullying with the phrase, “Boys will be boys.” Relatedly, many commercials, television shows, and movies inundate us with messages that women’s bodies are there for men to gawk at and to use for our sexual gratification. As a man, those cultural messages continue to sow their way into my psyche and I constantly need to notice them and find healthy ways to manage those impulses.

The problem is that, in general, our culture doesn’t intentionally teach men how to manage our sexuality. From parents who often ignore their children’s sexuality to religion that often represses sexuality to movies that often glorify gratuitous sexuality, we receive harmful messages that demean men and women. Thus, it’s not so much that there are good men and bad men out there. It’s more that we are a mixture of good and bad. At times we rise to the best of our masculinity; at other times we sink to the worst. And that’s why we need more positive models to intentionally point us to a better way of being masculine.

The Gillette commercial does just that. It is not male-bashing; it is male-affirming as it models an alternative to the dominant portrayal of the male figure in our culture.

The Christian Message Behind Gillette’s Commercial

I was listening to a podcast of more conservative Christians talking about how awful they thought the message of this commercial is. One example they raised is the men at the BBQ watching two boys fighting. The men repeatedly say, “Boys will be boys.” Then one man breaks free from the crowd and stops the fight, saying, “Guys, that’s not how we treat each other, okay.”

Tragically, the dominant message of American culture is the myth of redemptive violence that says: If someone hits you, you have every right to hit them back. Stand Your Ground with your gun. Protect yourself at all costs. Build walls. Peace through strength. Law and order!

Do you remember that time when Jesus said, “Okay fathers. You need to teach your sons to fight back. Teach them to punch that guy into a bloody pulp. Because we all know that’s how you become a man!”

I don’t remember that either. In fact, Jesus says the exact opposite.

And that involves deconstructing the myth of redemptive violence that says violence is the way to solve our problems. That myth infects me as much as it infects anyone, and I’m grateful when I see it being deconstructed. As followers of Jesus, the deconstruction of that myth involves nonviolence. It involves turning the other cheek. It involves treating women with dignity and respect. It involves loving everyone, even those you call your enemies. It means forgiving 7 times 70 times. It means standing up for a more just world without demonizing those on the other side.

The good news is the Holy Spirit is not bound to the church. The Holy Spirit has been unleashed. I don’t want to glorify Gillette. Its ultimate goal is the bottom line. But I’m glad Gillette thinks its bottom line will be enhanced with such a thoroughly Christian message of masculinity based on compassion and nonviolence.

But a question still remains – Why are many Christians so upset with Gillette’s commercial? I suspect that’s because many Christians have more faith in the myth of redemptive violence than they do in Christ.

January 24, 2019 Is God Violent? - The Wall, Family Separation, and Jesus' Mission Statement - Girardian Virtual Bible Study: Epiphany 3, Year C
Recent Comments
0 | Leave a Comment
"I divide the issue into two parts; the Jesus of the Sermon on the Mount--a ..."
Karen Silver Why You Should Run from Religion ..."
"Truly God has really given us the gift of love, strong enough to overcome Satan ..."
Don Davies Sermon: Satan, Guns, and the Flow ..."
"It is a fucken waste of time"
Michael Preedom Why You Should Run from “Bible ..."
""This is a bit like saying, "A guy I worked with asked me to help ..."
Mark Jeffrey Why You Should Run from “Bible ..."
Browse Our Archives
Related posts from Teaching Nonviolent Atonement