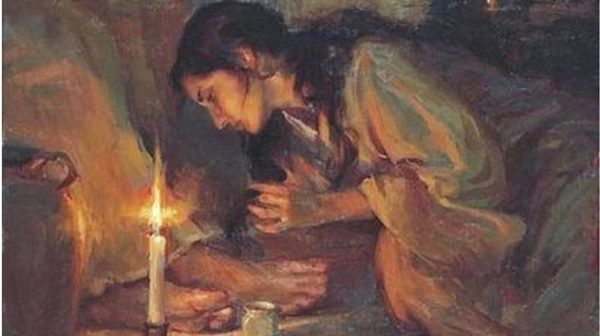 Editor’s Note: Every Wednesday at 10:30 am CT, Adam and Lindsey host a live Girardian Virtual Bible Study following the Sunday lectionary on the Raven Foundation Facebook page. We invite our listeners to join the conversation with comments and questions. I take some notes to help me prepare… and share them with you to help you do the same! This is the Girardian Virtual Bible Study preview! If you missed the live show, you can watch the recording and read the show notes here.

The cross looms ahead of us, and this week’s lectionary, John 12: 1-11, brings us closer to the revelation of God’s extravagant love – reflected in Mary’s scandalous generosity – juxtaposed against humanity’s imposition of blame and cruelty.

This passage contains layers upon layers of scapegoating and misappropriated blame, but cutting through it is truth, beauty and compassion.

A frequent misinterpretation of this passage is that Jesus is acquiescing to the inevitability of impoverishment, as if poverty is a natural phenomenon to which some are necessarily doomed. But if God is Love – if Love fashioned the universe and all that is in it and formed humanity to reflect Love – then the suffering that comes with destitution is not divine design. No, there is abundance for all, so why does Jesus say, “You always have the poor with you?”

Jesus’ Indictment and Lamentation of Sin

What if poverty is a way that the consequences of negative mimesis have become entrenched over time? As people live over and against one another and exclude and marginalize or exploit and manipulate others for their own benefit, the abundance of creation is horded by some and denied to others?

Furthermore, the escalation of human conflict, as desires for wealth, power, and influence clash against each other, erupts into war that further impoverishes those who already have little. The poor are often those conscripted into battle or sent to the front lines to fight for profits claimed by others under the guise of patriotism. Spilled blood poisons the soil, and today tools of modern warfare destroy homes and livelihoods and wreak havoc on the land and water, rendering them unable to provide for the people as intended. I don’t think Jesus foresaw bombs and missiles, per se, but I do think he understood the escalation of violence and the advancement of weaponry over time which would be put to use in the service of fear and greed and deepen the poverty of the people.

Jesus has seen how God’s commands to welcome and love strangers and foreigners have been neglected. He has seen instructions on forgiveness of debts ignored and the further entrenchment of poverty through the generations. He has seen how people and nations have defined themselves over and against others and how claiming the exclusive favor of an exclusive God has pushed out scapegoats within communities and fostered enmities between them. Poverty that results and metastasizes from these patterns of human behavior is something Jesus intimately understands precisely because he has placed himself at the center of it. The same forces that impoverish ultimately kill Jesus.

So when Jesus says, “You always have the poor with you,” he is lamenting, not acquiescing to, human sin – which can be summed up as the brokenness of human relationships that compels us to find our identities over and against, rather than with and for, one another.

And he says, “You do not always have me.”

Yes, he is foreshadowing his death. But he is not contrasting himself with the poor but rather standing in solidarity with them. And he is saying, “Unless you can see the unique and beautiful face of each person right in front of you, you will never truly care for the poor.” Poverty comes from dehumanization and exclusion, from casting people aside from the human community, from violence that violates and destroys bodies and souls. If you want to help those who are poor, see them! Welcome and befriend them, Jesus tells us. “And do not begrudge an act of extraordinary kindness and generosity toward them, as Mary is doing for me.”

Yes, there is so much more in this action, in this anointing for burial as both preparation for death and the beginning of death’s undoing itself – the undoing of the victimization and ritualization that grafts sacrifice into the lifecycle of communities and destroys them from the inside out. The Girardian Lectionary has a powerful notes from Gil Bailie’s lectures on this passage that further illuminate these verses.

What I find particularly striking, however, is poverty as a consequence of the dehumanization that is pinpointed against a single individual or group in the scapegoating mechanism, as the widespread result of scapegoating from the foundation of the world. Because in an age and a society where the poor are still scapegoated, and violence – in the form of destruction of social programs and the diversion of funding to wars that further entrench poverty – violence that harms the poor is whitewashed and cloaked in pseudorighteousness, I believe we must see the social and political dimension of Jesus’s words, as well as the personal. At the core of it all, to say “You always have the poor with you,” is to say that the fullness of humanity is always denied. And that will only change when we see the Fully Human One right before our eyes. That is why Jesus draws the focus back to himself; ultimately to affirm the dignity of everyone and to show us that dignity that we may see it in ourselves and others.

If we see poverty itself through the lens of scapegoating, we can see how this passage presents further layers of scapegoating as well, layers that can lead to marginalization and poverty.

Judas scapegoats Mary. He chastises her for her extravagant generosity as she spreads the perfume over Jesus’s feet.

The evangelist scapegoats Judas. He says that Judas has no concern for the poor, but wanted to steal from the treasury. Commentaries say other scholars are more sympathetic to Judas. And, as a fan of the musical “Jesus Christ Superstar,” I’ve always been sympathetic to Judas myself. Yes, he betrays Jesus, but so do we all. To turn to the ways of violence for self-protection or enrichment is to betray Jesus. To build ourselves up over and against others is to betray Jesus. Entrenched biases and prejudices are betrayals of Jesus that permeate our world and infect our souls. For the evangelist to hone in on Judas’s faults and judge his motives is to detract from the deeper truth that everyone witnessing such extravagance on Mary’s part was likely scandalized by it. And today, while giving to the poor is considered a virtue, programs that uplift the poor and attempt to restructure society so that poverty is reduced are often maligned as “hand-outs.” We must ask, to what extent are we scandalized, and how much more must we open our own hearts to acts of extraordinary generosity and kindness?”

The chief priests scapegoat not only Jesus, but Lazarus as well, “since it was on account of him that many of the Jews were deserting and were believing in Jesus.” Fearing loss of authority and power, and fearing destruction of their community by Rome, they conspire to put Lazarus to death… again.

And generations of Christians have scapegoated Jews because of an anti-Semitic reading of this text. If we set Jesus apart from every other victim and see his execution as something unique and more offensive than that of anyone else, we miss his solidarity with the victims of violence in all times and places, and we mistake the violence done against him as worse than our own.

Beyond Scapegoating: Come Join the Conversation!

There is so much more, including the fact that Mary, herself marginalized, models the generosity and vulnerability that Jesus later displays when he washes the feet of his disciples. In the Hebrew reading of Isaiah (43: 16 – 21), God declares “I am about to do a new thing,” foreshadowing the forgiveness and undoing of the ways of blame and violence that lead to death that spring from the cross and resurrection…

But, I fear I have already said too much. These previews are meant to entice, not give everything away. Because we want you to come and join our discussion. And yet, the richness – not only of the text, but of the human history and culture that it illuminates, from the foundation of the world until today – beckons me to further explore, and writing is my journey. So, I hope you are intrigued to journey with us. What stands out to you among these scriptures? How do you interpret Jesus’ words about the poor, or Mary’s extravagant generosity, or Judas’s chastisement, or the reaction of the chief priests? And if “we always have poor among us,” what does that mean in light of the prayer that God’s will be done on earth as in heaven? What does Jesus have to say to today’s social and political and economic systems? What does he have to say to the ways we see, or don’t see, those who are poor among us? What hope does he offer the poor themselves, who comprise the majority of the world?

Come and join us as we dive into some of these questions, or bring your own questions or comments. Let us be challenged and nurtured together.

Whether you’re a minister preparing your Sunday sermon or a lay person trying to better understand the Bible, whatever you believe, question, or doubt, we warmly invite you to participate with comments and questions as we seek to grow our virtual community. Your presence is more than an honor and a blessing – it’s a necessity! Since we are interdividual beings, growing in relationship with one-another, we need each other! Your participation is an integral part of the Girardian Virtual Bible Study!

April 4, 2019 Thoughts Beyond Vietnam: A Contemporary Reflection On Martin Luther King's Timeless Wisdom
Recent Comments
0 | Leave a Comment
"I divide the issue into two parts; the Jesus of the Sermon on the Mount--a ..."
Karen Silver Why You Should Run from Religion ..."
"Truly God has really given us the gift of love, strong enough to overcome Satan ..."
Don Davies Sermon: Satan, Guns, and the Flow ..."
"It is a fucken waste of time"
Michael Preedom Why You Should Run from “Bible ..."
""This is a bit like saying, "A guy I worked with asked me to help ..."
Mark Jeffrey Why You Should Run from “Bible ..."
Browse Our Archives
Related posts from Teaching Nonviolent Atonement