The Power of the Quiet Witch

What is it that they say? It’s the quiet ones you have to watch out for.

When it comes to Witchcraft, I think that’s especially true. The sentiment is mirrored in the Latin-originating proverb  “Still waters run deep.” According to Wikipedia this saying is “”now commonly taken to mean that a placid exterior hides a passionate or subtle nature. Formerly it also carried the warning that silent people are dangerous.”  Both sayings essentially say: appearances can be deceiving – just because someone isn’t making a lot of noise on the surface doesn’t mean they’re not full of activity. Also: don’t be so quick dismiss what you cannot see.

The other evening I posted to my personal page and Twitter, “Often true in both art & the Craft, the quieter the work/worker, the deeper & stronger it goes. Thought can be far more powerful than words.” What does that mean?

Now of course, the four powers of the Sphinx first spring to mind – to know, to will, to dare, and to keep silent. I also talked about the power of observation, listening, and resting in the post Secrets of the Uncommon Witch. But that’s not quite what I’m talking about here.

A common trend in today’s society is that assuming if someone isn’t saying or doing something that you can clearly and openly see, nothing is happening. That they’re inactive, not caring, or participating – which may be completely untrue.  I think we all know subconsciously that what we see of others online and in person isn’t the full picture – because it’s true of ourselves. No one else can be on our heads, and not everything is put on display (or should be).  But media often has a habit of translating the real world into a simplified, 2D format that declares something or someone must be either THIS or THAT. But I digress, because I want to tackle media, personality, and Witchcraft in a future post.  For now, I’m bringing up the fact that we need to consciously realize that the unspoken and unseen actions do exist, even if they aren’t witnessed.  And there is much power to be found in that.

More so, I’m getting at understanding two sides of the same coin for your personal practice.  One side is: just because you might not see someone being vocal or active about something, doesn’t mean they are.  The other side is: you don’t have to make a show of everything – sometimes that energy is best conserved by directing it internally and dispersing it quietly.

This approach can work especially well for some conflicts – especially disagreements in groups, dealing with misinformation or miscommunication, etc. It’s very easy to get swept up in arguing points with opposing sides, which often leaves a person feeling emotionally, mentally, and/or spiritually wiped. Imagine how much time and energy can be lost like that.  It’s like turning on a top 40 station in an echo chamber – the noise just doesn’t stop.  Nothing gets accomplished or heard.

If you approach a problem more metaphysically-minded, you can focus in the situation more deeply and begin thinking towards a solution.  If a situation doesn’t involve you directly, but it does circle around people you care about, you can direct your attention to aiding them – sending healing, emotional support, lending strength and illumination.  All from just within yourself, and perhaps some workings at your altar if you prefer to do something physical as well.  This type of magick helps direct the current underneath the surface, versus lending to the wave action on top.

While I’m a writer and I spill out a couple thousand words a week onto the Internet through this blog and other places, I’m actually a very quiet person.  I’m not much for talking (unless there’s booze and the topic is art or Witchcraft – then just try shutting me up.  Really, it’s best you don’t try.  It’s generally pretty amusing anyway….) and I’m really uncomfortable with chit-chat.  So when I do decide to say something, there’s a fair amount of intent behind it.  I believe words have power so I don’t relish wasting them.  There’s definitely a time and place for using your words – so I’m not saying to be silent when words are what’s needed.

Instead, I’m suggesting to explore the deep and quiet end of the pool.  Look at it this way: what’s easier to maneuver in?  The ocean on a windy day when the waves are rough, the current is strong, and you can’t see the bottom from all of the churning? Or a calm bay with almost no waves at all? Sure the ocean can be fun, but it’s going to exhaust you quicker. So using that same understanding, when you’re looking at a turbulent situation, stepping back to observe may behoove you (and it).  Instead of increasing the activity on the surface, you can work quietly below it.

Magick starts with thought – giving form to ideas.  The most powerful magick often is rooted in careful, in-depth thinking. That level of examination requires ceasing unnecessary action, closing the lips/stilling the fingers, and getting down to focusing. You become an envelope of quietude, and the work gets delivered through it.  Under the surface in the deep dark depths is where there is room to move giants and experience the mysteries.

So don’t underestimate the power of the quiet ones, the holders of space. There are worlds shifting below those surfaces, if you pay attention and listen to the silence.  Find the magick of the quiet Witch. 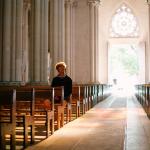 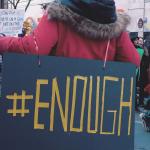 May 18, 2018 Every Witch Is An Activist.
Recent Comments
0 | Leave a Comment
Browse Our Archives
Related posts from A Modern Traditional Witch