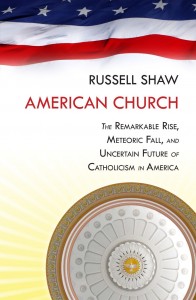 My First Things column this week was more or less (and a little weirdly) inspired by three very disparate things: Pope Francis’ thoughts on “the dark joy of gossip” (and his homily from yesterday morning), Harry Crane’s outburst on last Sunday’s episode of Mad Men and Russell Shaw’s new book, American Church: The Remarkable Rise, Meteoric Fall, and Uncertain Future of Catholicism in America

The pope’s words on gossip have been reverberating within me (and, I know, within others) for weeks, but I was also reading Shaw’s book while watching Mad Men, and if you sleep on all of that, you have some interesting dreams. In my case, I kept seeing a theme that was all about inclusivity, exclusion, and working too hard to fit in with not only the world, but the times. It fits imperfectly, but there is a common strand running through it all, beginning with the idea that gossip creates a little “we” in the midst of “us” that gives us an illusion of superiority to “them.” It is, to use an oxymoron, a true illusion.

“Dark joy” perfectly characterizes the action of gossip, the resulting sin, the objectification of another person, the turning of a human being into a thing, the tool by which we build an illusion of inclusion within a rather porous clique—porous because we are like sponges, absorbing molecules of spite at the coffee machine and releasing them, sometimes with malice, in the elevator. There is real joy in all of this. Our actions are intended to make us feel like we belong somewhere; we “fit in” among one group by virtue of the snickers and wagging tongues through which we exclude others.

We “fit in” at least until we step out of earshot and become the excluded other ourselves.

It’s natural to want to feel included within the social milieu one circles at work, in business, in the neighborhood. Often people rotate around the periphery, like satellites, until they find

an opening, growing in frustration as access is denied, like poor old, sincere, hard-working Harry Crane, whose work is valued, but who will personally never be more to the partners at Sterling Cooper Draper Pryce than a toy to play with until they get bored and bat him away. Part of working one’s way into an inner circle is about pretending you don’t really care if you’re there; that makes it look easy. Harry Crane wants it very badly, and therefore, tries too hard. From top to toe, he literally wears his great desire to fit in, and so he never will.

The less secure we are in our specialness, the greater our need for extra-familial belonging. The neediest among us seek to dwell among those preternaturally smooth sorts who seem ahead of the curve and impossible to surprise; they are always astride the zeitgeist as it ascends, and the first to slide from it before others even notice it has begun to wane. That takes a nimble awareness, a malleability for the sake of inclusion. One cannot grab on to the latest trending vine unless one is willing to release the last one; one cannot be forever at the forefront of thought unless one is willing to forget much that has passed, and shove aside inconvenient reminders.

What does this have to do with the American Church? A great deal, actually, if you read Shaw’s book, or even if you just wonder how we have come to a point where a government once thought perhaps the most religion-accommodating in the world wonders why it need accommodate a religious conscience, any longer. Shaw argues that the “uncertain future of Catholicism in America” is partly due to our church’s own willingness, in the late 19th and early 20th centuries, to conceive of a broader, less culturally backward, more cutting-edge American Catholicism — a Catholicism as “exceptional” as America itself, a church capable of riding the energetic, optimistic American zeitgeist for as long as it could (and to great effect) until times and trends zoomed into the post-Christian stratosphere, where she did not belong. From my column, again:

That individualism was demonstrated last week when it became known that Pope Francis means to continue the correction and overseeing of the Leadership Conference of Women Religious. Reacting to the news, Sr. Mary Ann Hinsdale, a theologian at Boston College, wondered what Francis—himself a member of a religious order—understood “of religious in North America” where, apparently, the consecrated life is exceptional and lived differently than the religious life in the rest of the world. In fact, it is that sense of exceptionalism that brought the LCWR under scrutiny to begin with.

Once we have been included, once we’ve been the cool kids at the table it’s difficult to bear exclusion. Chesterton said “when you chose one thing, you exclude everything else” and in a way our American church is trying to figure out whether it would be more painful to be excluded from Rome or the trending culture.

The church in America has enjoyed a kind of “American Catholic exceptionalism”, a conceit that our thinking, our judgments and our work was different (and superior, more enlightened) that what was coming out of what I once heard a sister call “that church in Rome.” Shaw writes of that mindset:

As embodied in powerful churchmen [like James Cardinal Gibbons] . . . the Church in America had a God-given duty to show the rest of the Church, and especially her leadership in Rome, the way to the future as that path was then being marked out in the United States (which contained, and may still contain, important elements of truth but which suffers from the fatal arrogance of American exceptionalism dressed in ecclesiastical garb.)

American Church, by the way, is no diatribe against “progressive” Catholics, or a hymn to traditionalism. Although Shaw is clear that his allegiance is to Rome over any idea of an exceptional American church, throughout the book he is careful to note that a great deal of good came about for Catholics, and for Catholicism, as a whole, from the American side of things. But he also notes where our own conceits have sowed confusion and kneejerk dissent, and marks a way back that will ultimately require a full-on return to the cross, in contradiction of times and trends, to the time-transcendent Christ.

Related:
A Divided Church and a Movement with Momentum
A Church with Blades Drawn

April 23, 2013 Have no fear!
Browse Our Archives
Related posts from The Anchoress