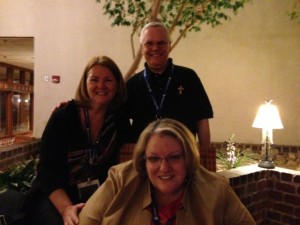 I am very nearly positive that in the years I’ve been writing this blog I have never left it completely unattended for a full week — not when I’ve traveled to Rome. Not when I’ve traveled to Rome and been lying on the tile floor, at death’s door, even! Nor when I’ve vacationed anywhere. Except for the days following my brother’s passing — for which there were no immediate words — I’ve blogged or arranged for a guest blogger when I’ve been on the road.

And it’s not like I didn’t have plenty I could have written about. I could have managed a few thousand words on my first day’s traveling adventure, alone: nearly 14 hours to go from New York City to Denver on a day that began with a train derailment and ended with a tornado and then a two-hour shuttle trip and a 10PM meeting fueled by a double Gin and Tonic.

In fact, now I think of it, that might have been quite a blog post! Or, perhaps, better I spared you the tale.

Anyway, the Catholic Media Convention was well-worth attending, and a number of Catholic Patheosi shone brightly while there: Deacon Greg (who continued to blog like mad throughout — we can’t stop him!) was like a little superstar, there, with people doing double-takes upon seeing him, or saying “oh, you’re THE Deacon Greg, well, let me shake your hand for real, now!”

The ever-busy Lisa Hendey managed to serve on not one but two discussion panels at the conference, but also learned that her dreams of February came true in June as she was named an Egan Journalism Fellow by Catholic Relief Services, which means she’ll be joining America Magazine’s Kerry Weber, Michelle Bauman of Catholic News Agency/EWTN and Ron Lajoie of Catholic New York, as they head to Rwanda in October for some intensive, focused reporting. Imaging blogging from Rwanda! She’s very excited. Congrats to Lisa!

And me? I got to interview the great Father Robert Barron, and the latest installment of his Catholicism Project, which I’ll be posting about as soon as I get the long chat transcribed!

It’s great to travel and meet and hear from so many Catholics I so greatly admire — John Thavis was terrific in his talk, and Mother Dolores Hart, OSB was downright earth-shaking — and I’ll write about a lot of it, in turn. But I’m glad to be home. More later. 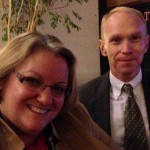 June 25, 2013 Talking with Matthew Bunson: Sherlockian and Catholic Scholar
Browse Our Archives
get the latest from
Catholic
Sign up for our newsletter
POPULAR AT PATHEOS Catholic
1

Why Would a Sinless Mary Offer Sacrifices?
This is a reply to Matt Slick: Presbyterian pastor and head of the...
view all Catholic blogs
Copyright 2008-2020, Patheos. All rights reserved.