America Magazine has just posted 12,000 word profile and interview of Pope Francis, written by the wonderful Antonio Spadaro, S.J. (a beloved friend) and covering a broad range of issues:

The setting is simple, austere. The workspace occupied by the desk is small. I am impressed not only by the simplicity of the furniture, but also by the objects in the room. There are only a few. These include an icon of St. Francis, a statue of Our Lady of Luján, patron saint of Argentina, a crucifix and a statue of St. Joseph sleeping. The spirituality of Jorge Mario Bergoglio is not made of “harmonized energies,” as he would call them, but of human faces: Christ, St. Francis, St. Joseph and Mary.

The pope speaks of his trip to Brazil. He considers it a true grace, that World Youth Day was for him a “mystery.” He says that he is not used to talking to so many people: “I can look at individual persons, one at a time, to come into contact in a personal way with the person I have before me. I am not used to the masses,” the pope remarks. He also speaks about the moment during the conclave when he began to realize that he might be elected pope. At lunch on Wednesday, March 13, he felt a deep and inexplicable inner peace and comfort come over him, he said, along with a great darkness. And those feelings accompanied him until his election later that day.

I’m in the middle of traveling, so that means I’m still in the middle of reading it, myself, but I wanted to make sure you saw it and could get started reading it, too — and reading it through, prayerfully and openly, before allowing anyone else’s reactions to influence your own thinking. From what Fr. James Martin excerpted on his facebook page, it looks to be extremely interesting:

“A person once asked me, in a provocative manner, if I approved of homosexuality. I replied with another question: ‘Tell me: when God looks at a gay person, does he endorse the existence of this person, or reject and condemn this person? We must always consider the person.”

“If the Christian is a restorationist, a legalist, if he wants everything clear and safe, then he will find nothing.”

“We cannot insist only on issues related to abortion, gay marriage and the use of contraceptive methods. This is not possible. I have not spoken much about these things, and I was reprimanded for that…The teaching of the church, for that matter, is clear and I am a son of the church, but it is not necessary to talk about these issues all the time.”

. . .it is a rich text that needs to be read and re-read on its own terms, without a defensive or fearful spirit, with no additions from the press or myself. Please, don’t read it for melodrama or controversy: read for what is there, no more and no less. Grab a cup of coffee and sit down for a few minutes to hear what Pope Francis — the man of flesh and bone — has to say. Breathe. Think. Ponder. Question. Imagine. Check. Double-check. Set it aside. Repeat. Then, and only then, perhaps, express an opinion or a point of view, with charity. Resist the temptation to objectify, politicize, and use the Pope’s words, given in a pastoral spirit.

UPDATE:
The Holy Spirit DOES work in odd ways, no? As we see people rush to excerpt this interview and spin it toward a reflection of themselves and their views, it’s good to remember that doing that makes it all about us! God’s timing. When I get a chance I’ll post my favorite excerpts. 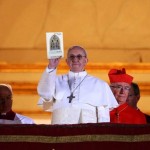 September 18, 2013
Are we making an idol of the pope who warns against them? UPDATED
Next Post

September 20, 2013 A Spiritual Anti-venin for Catholic Battlers
Browse Our Archives
Related posts from The Anchoress