… I am quoting Fr. Z in the above title, but I must say that if this very moment Archbishop Niederauer and Cardinal Wuerl decided to excommunicate Nancy Pelosi or deny her Communion I would stand up and loudly cheer with joy. Hell, I may even dance in place.

And you can call me nasty or un-Christian for doing so all you want – but you’d be dead wrong.

Warning: I am about to say “hell” a lot.

First lets examine what it means when someone is excommunicated and denied Holy Communion. Excommunication is a “medicinal rather than a vindictive penalty, being intended, not so much to punish the culprit, as to correct him and bring him back to the path of righteousness.” [1]

By refusing to correct Pelosi’s repeated and scandalous support of matters so clearly contradictory of Church teaching she is most surely dooming herself to Hell. The silence of her superiors could be perceived that they don’t give a damn about her. Pelosi is in dire need of fraternal correction now. This very moment. Before she opens her mouth and condemns herself further.

Next let’s review Canon 915 on denying Communion: “Those upon whom the penalty of excommunication or interdict has been imposed or declared, and others who obstinately persist in manifest grave sin, are not to be admitted to holy communion.”

If Nancy Pelosi’s obstinate favor of abortion and contraception isn’t grounds for excommunication or denial of Communion then what the hell is? Denying her communion is not meant to be mean or judgmental. This is not a matter of “knowing someone’s heart”. Hearing that makes me rage. 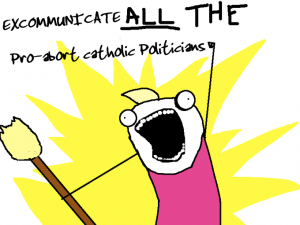 We don’t need to know her heart. She’s publicly stated what her heart believes again and again. At this point there is no question.

Yeah but, what would Jesus do? Well, if you can’t or won’t presume to know what’s on Pelosi’s heart – even when she’s shouting it in front of the press – then don’t you think it’s pretty asinine to assume you’d know what Jesus Christ His Almighty Self would do?

I’m going with flipping tables in a fit of fury as my answer. 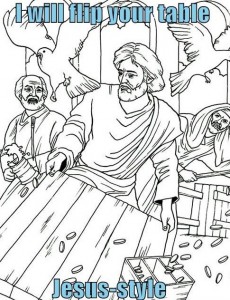 It’s not about being nice. It’s about upholding Church law and how it would be pretty sweet to have a Bishop wield his authority in such serious matters. It’s about defending what Catholics believe in no matter how severe the political backlash may be.

A denial of Communion is not using the Body of Christ as a “weapon”, as Wuerl stated in 2009. Denying communion is preserving our Sacrament from being profaned. For her to present herself to receive Our Lord in such a state where she publicly promotes and condones abortion and contraception is a SACRILEGE. I suppose if you believe communion is just communion and not Our Lord and Savior transubstantiated than there’s no need for anathema’s – carry on as you were. But surely that is not what Wuerl was implying, even when our Pope has said otherwise.

“Regarding the grave sin of abortion or euthanasia, when a person’s formal cooperation becomes manifest (understood, in the case of a Catholic politician, as his consistently campaigning and voting for permissive abortion and euthanasia laws), his Pastor should meet with him, instructing him about the Church’s teaching, informing him that he is not to present himself for Holy Communion until he brings to an end the objective situation of sin, and warning him that he will otherwise be denied the Eucharist.” – then Cardinal Ratzinger, Worthiness to Receive Holy Communion.

So what the hell is the hold up here? The silence from our Church leaders is frustrating the flock. It’s even made poor Fr. Z curse.

The Church hierarchy needn’t be afraid of the message it will send by excommunicating Pelosi. They need to fear the message they are currently sending by not doing so. All I see is cowardice and a Church built on the blood of martyrs is not a Church of political kowtowing and cowardice.

If I were to rejoice at Nancy Pelosi’s excommunication I would be rejoicing the correction of sin, the chance at redemption, a hopefulness that a heart is turned away from supporting abortion, and that the Church Militant has finally decided to fight back.

I think that warrants the Happy Dance. 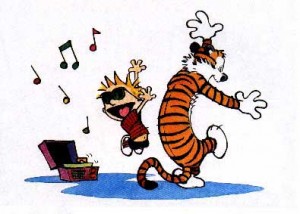 February 7, 2012
if you value your life please heed my advice...
Next Post

February 9, 2012 thirsty Thursday...
Recent Comments
24 Comments | Leave a Comment
"Pithy and so, so, true. If it were possible, I'd post a million of these ..."
Vicky Hernandez #whyIstayed Why Women Stay In Domestically ..."
"All the best to you, Katrina! We'll miss you. Thanks for sharing your journey with ..."
Lori Ten Years is a Long Run…
"Bon voyage on your new endeavours. And thank you."
Cordelia Ten Years is a Long Run…
"I will miss your unique, funny, honest voice. Thank you for all the years of ..."
Jim Vogel Ten Years is a Long Run…
Browse Our Archives
Related posts from The Crescat