Does the Habit Make the Nun…

Does the Habit Make the Nun… August 20, 2012 Katrina Fernandez

… I have never known a non-habited nun. I know they’re out there and I may have even met a few but how would I really know? It’s not like they’d be dressed in any distinct fashion to alert me that I was in the presence of one. I haven’t been Catholic long enough to hone that unique ability to spot them from yards away by a special lapel pin that some of my friends have mastered. And it is an art they’ve told me. One friend can tell simply by the shoes.

Me, I don’t like to try that hard and I’ve yet to master subtle. Needless to say, I like my nuns on the obvious side. Now contrast that with Max Lindenman, who has never met a nun in a habit. He writes about the polarizing prejudices Catholics have of religious sisters who chose not to wear a habit.

LCWR sisters have, by their own admission, taken the spirit of Vatican II and run as far and as fast with it as their intellects could carry them. Does that mean the other kind of sisters have gone in the opposite direction at the same speed? Hopefully not; if they have, we should expect convent chats to proceed along these lines:

Nun # 1: So what’d you do after Adoration last night?
Nun # 2: Had another ecstatic vision about the martyrdom of St. Philomena.
Nun # 3: F’real? Me too!

Which got me wondering about my own prejudices of the non-habited sisters. Again, having never personally met one I had to ask myself am I being fair. To answer that I need to examine what I know of the habit.

Taking the veil is an outward sign of obedience, humility, and a public renunciation of the world. But mostly it’s a uniform. Uniforms have psychological effects on the wearer and of those observing the wearer. It’s been proven that school uniforms positively affect attendance, behavior and grades. Working in a hospital I’ve witnessed first hand how the breakdown of specific uniforms for healthcare workers damages patient’s confidence in the care they are receiving and negatively effects their perception of professionalism. It’s not comforting to the patient at all when they can’t tell an orderly from a registered nurse. And from the perspective of a parent, I can attest to the change in behavior that overcomes a young man in a scouting uniform.

I guess what I’m saying is appearance matters and that the habit makes a woman religious look the part and this surely has to aide her in her consecrated life. I’m not implying the garment has magical transforming powers or that just because a woman is in a habit makes her automatically a living saint but certainly wearing a habit can’t hurt. In contrast, I have to wonder, what it means when a religious community intentionally decides not to wear the uniform of their chosen career. Does it make life unnecessarily harder for them? On those days where they struggle with their vocation they don’t have the reassuring comfort of slipping into a habit. They aren’t recognized in public and half of the Catholic community treats them like miscreants.

So I set out to try and understand, beyond my own prejudices, more about these non-habited sisters. I started by examining blogs written by these nuns, which there really aren’t that many. I looked a bit over the writings of Sr. Camille who writes for the National Catholic Reporter and someone suggested Musings of a Discerning Woman. I guess I was expecting posts about womyn empowerment, reiki therapy or female reproductive “rights”. Honestly, a lot of it didn’t look any different than something I’d post here. Except I’m funnier. Oh, and I’m not a nun. Again, I like things obvious and nothing screams “Catholic nun” than the blogs of the Dominican Nuns of Summit, NJ and the Poor Clares of Perpetual Adoration.

But then are the examples I gave just reinforcing the overly pious stereotypes Max has of habited nuns; that they are so holy and beyond approach? I guess because I personally know habited nuns it’s not such a stretch to imagine them as this… 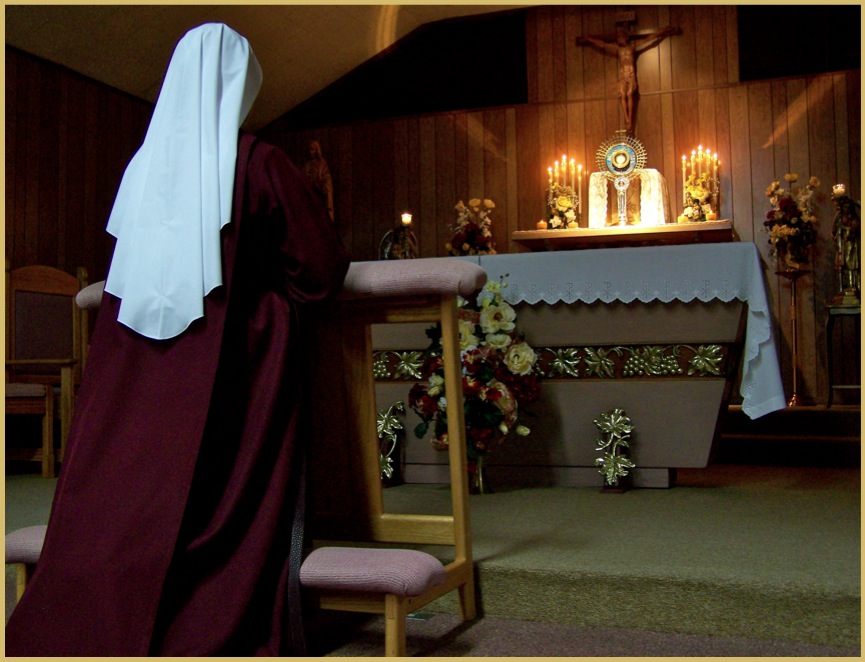 Photo: Handmaids of the Precious Blood

as well at this… 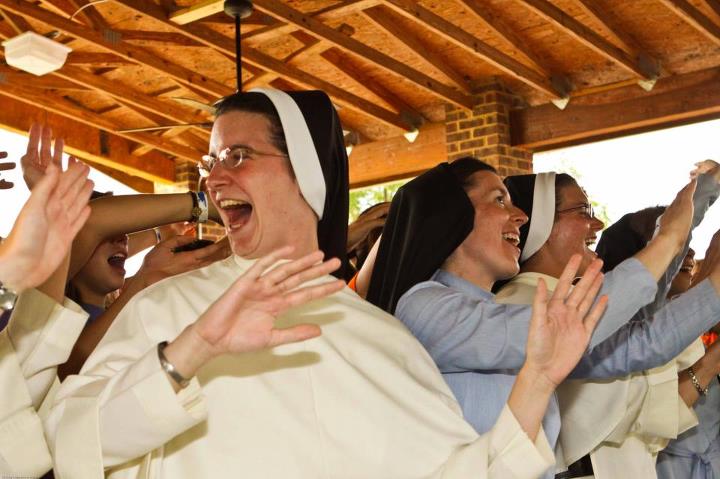 Where Mr. Lindenman thinks unapproachable piety, I think outward expression of joy. Every single habited nun I have ever met has been joy filled to the point of radiance. And this is not some romanticized exaggeration either. It’s not so much the habit that has a luring appeal to young women inquirers as it is the boundless joy and energy that transcends age. It’s like a magnet.

And I really think that love, joy and obedience makes the difference between this… 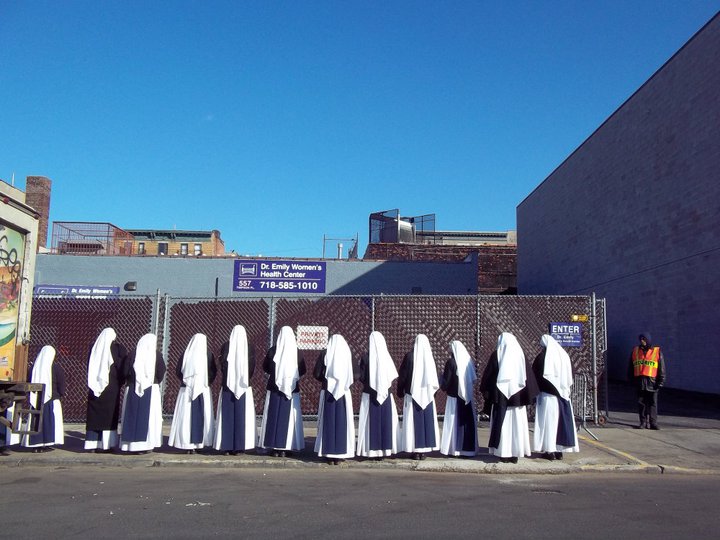 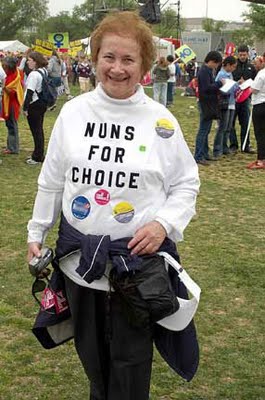 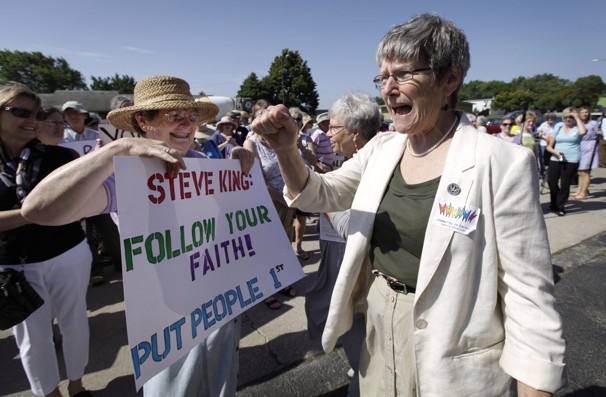 Is it a coincidence that pro-abortion advocating religious sisters don’t wear a traditional habit? It would appear, for all outward appearances, that it is not. It’s no wonder the lack of a habit is used by many to determine orthodoxy and faithfulness to Church teaching. I still happen to think it’s a fair assumption to make; however, I’m open to being proven otherwise.

Related Links: Refusing To Wear The Traditional Habit and Women Entering Religious Communities With and Without The Habit.

August 21, 2012 Truly, Baby Jesus Weeps...
Recent Comments
0 | Leave a Comment
"Pithy and so, so, true. If it were possible, I'd post a million of these ..."
Vicky Hernandez #whyIstayed Why Women Stay In Domestically ..."
"All the best to you, Katrina! We'll miss you. Thanks for sharing your journey with ..."
Lori Ten Years is a Long Run…
"Bon voyage on your new endeavours. And thank you."
Cordelia Ten Years is a Long Run…
"I will miss your unique, funny, honest voice. Thank you for all the years of ..."
Jim Vogel Ten Years is a Long Run…
Browse Our Archives
get the latest from
Catholic
Sign up for our newsletter
POPULAR AT PATHEOS Catholic
1

Unmasked: Pride, Malice, And The Spirit...
A Little Bit of Nothing
Related posts from The Crescat 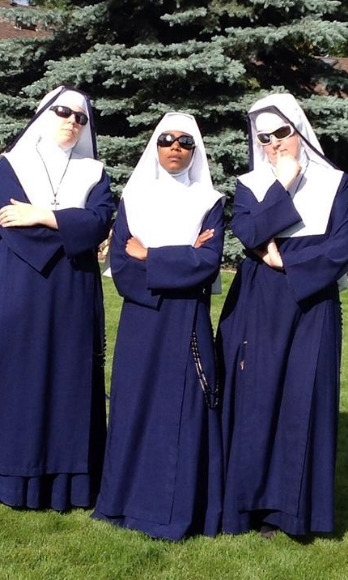 Catholic
My religion is still cooler than yours...
The Crescat 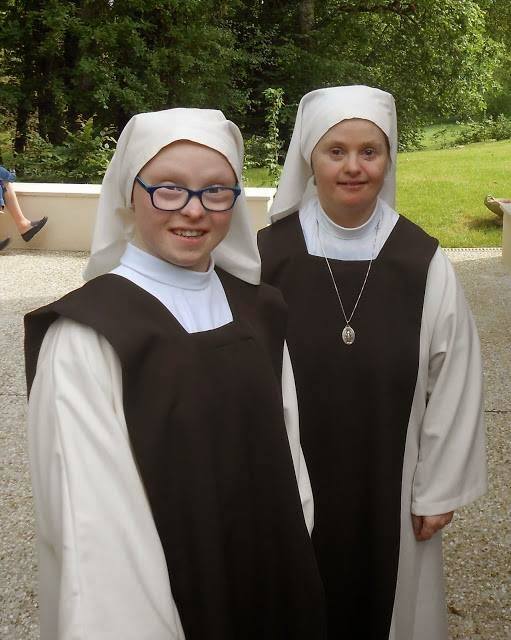