Wait, what? That’s not how humility works? 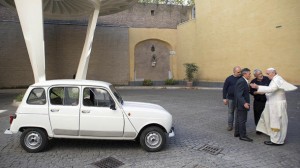 Pope Francis has already made headlines for choosing a five-year-old Ford Focus as his preferred papal transportation, part of a public emphasis on thrift and poverty. But last weekend, the pontiff expanded his garage with the addition of a 29-year-old sedan with 186,000 miles as his personal car.

According to the Catholic News Agency and others, the car above, a 1984 Renault4, was donated to the pope by Italian pastor Renzo Zocca. Zocca had written Pope Francis earlier this year, offering to donate the car which Zocca had used for decades while working in impoverished neighborhoods of Verona, as a symbol of their shared concern for fighting poverty. [Source] 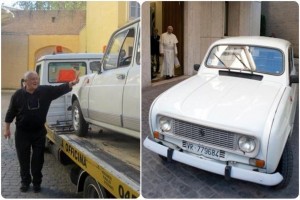 Oh goody. Maybe when this newest public symbol of awesome humility breaks down we’ll all be treated to images of our humble pope rolling up his robes to check the engine and change the tires.

I’m starting to understand this fascination with his public “humility”. Pope Francis is really just reflecting back to people what they think they see in themselves. He drives a crap car, well so do I. Francis, like, totally gets me. He’s so one of us, therefore awesome and worthy of my admiration. Everything else he does is just too Catholic-y so let’s focus on the car please. Now if you’ll excuse me, I am waiting on an important call.

I know. I know. It’s not Pope Frank. It’s all media spin. Personally I miss the good ole days when the media either hated or ignored the pope. You know, January.

September 12, 2013 Holy Name of Mary ...
Recent Comments
0 | Leave a Comment
Browse Our Archives
get the latest from
Catholic
Sign up for our newsletter
POPULAR AT PATHEOS Catholic
1

Listen to the Church, not LifeSite,...
Chaos and Old Night
Related posts from The Crescat 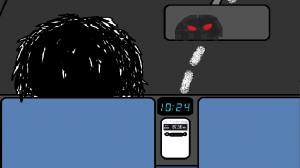