… I am not a person easily offended. In fact, nothing irritates me more than the perpetually offended. It takes a lot, and I mean A LOT, to make me offended.

Consider this the lucky rare exception. 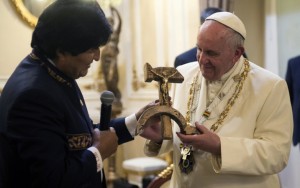 I’m just going to go ahead and say this, that picture should have never happened.

Edited 7/10/15 – In this post, by David Mills, Mills notes that Nancy Pelosi was refused a photo-op with Benedict, because Benedict knew how she would use it to her advantage. He writes,

“Readers may remember Nancy Pelosi’s comic efforts a few years ago to spin a visit with Pope Benedict as a meeting of the minds. He spoke to her about the responsibility of all politicians, especially Catholic ones, to protect the unborn. She, not surprisingly, forgot to mention it when she released her chipper press release. The Vatican had also refused her request to be photographed with Benedict. The pope wasn’t born yesterday.“

It’s not like Francis had no clue about Morales’s character and politics. I’d like to think Francis wasn’t born yesterday too.

Do I think Francis should have smacked Morales across the face with it for daring to present such a blatantly blasphemous gift?

While I may have enjoyed watching that the answer is obviously “no”, diplomacy being what it is. However, I firmly believe Francis never should have accepted it. Not even touched it. Passed it off to one of his handlers, perhaps, or said he could not accept such a thing. Better yet, he should have turned his back and walked away.

I don’t care how many times he purportedly stated “that’s not right” and scowled disapprovingly. The end of the exchange resulted in the above photo – the Pope photo-oping with one of the most sacrilegious crucifixes I’ve ever seen while being showered in Communist medals.

For my sanity, I was right to shield my mind and eyes from this papacy last year. I’ve run out of cares to give. 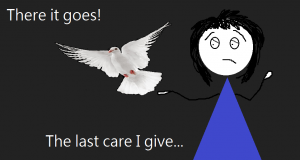 I’ll be honest, I am not even going to read what’s being published in his defense because it’s indefensible. This is just one of many more sure to come utterly tone deaf actions and off the cuff remarks that I’ve come to expect with this papacy.

I’m only lifting my Francis Sanctions now because this incident is so incredibly unbelievable and almost laughable. Except that it’s not. Not even a little bit. 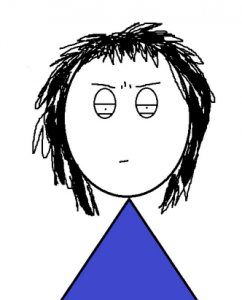 What it is; however, is scandalous. Which is why I feel it important to note that while, yes, I am offended I am not going to let it disrupt me. And you shouldn’t either.

Just go on being Catholic the best way you can. Worry about yourself and your own holiness. Take care of your family, take care of each other. Pray daily and make regular use of the sacraments. That alone will keep you busy enough, too busy to fret about the pope and the headlines.

And finally, I’ll leave you with this pretty thorough take down of today’s event from a blogger whose opinion on the matter I share, and then resume normal blogging*.

July 10, 2015 Approach with caution...
Recent Comments
0 | Leave a Comment
"Pithy and so, so, true. If it were possible, I'd post a million of these ..."
Vicky Hernandez #whyIstayed Why Women Stay In Domestically ..."
"All the best to you, Katrina! We'll miss you. Thanks for sharing your journey with ..."
Lori Ten Years is a Long Run…
"Bon voyage on your new endeavours. And thank you."
Cordelia Ten Years is a Long Run…
"I will miss your unique, funny, honest voice. Thank you for all the years of ..."
Jim Vogel Ten Years is a Long Run…
Browse Our Archives
Related posts from The Crescat