Such appears to be the claim in a meme (above) that was posted in a Facebook group this week that I occasionally participate in.  The origin of the meme itself is unknown to me (it can also be found here).  The message is straight forward.  Catholics regularly refer Protestant interlocutors to the Early Church Fathers to support their arguments.  In the meme, the advice is taken, and a citation from St. Basil of Caesarea’s (d. A.D. 379) Epistle 283 is supposed to prove the fact that this Greek Father was an adherent of Sola Scriptura.  Case closed.  But this is the problem with proof texting, which I might point out is not limited to only one side of the confessional divide.  With that being said, reading St. Basil within the context of his other writings yields a different result.  This is especially so when taking more of a bird’s eye view of the the Early Church Fathers’ approach to Scripture and Tradition in general.

It is beyond the scope of this modest article to do a comprehensive analysis of the Early Church Fathers on this subject.  It will have to suffice to consult the well-known work of the Anglican Patristics scholar, J.N.D. Kelly.  After doing a brief survey of the third and fourth centuries [the period to which St. Basil belongs], he concludes:

“Throughout the whole period Scripture and tradition ranked as complementary authorities, media different in form but coincident in content.  To inquire which counted as superior or more ultimate is to pose the question in misleading and anachronistic terms.  If Scripture was abundantly sufficient in principle, tradition was recognized as the surest clue to its interpretation, for in tradition the Church retained, as a legacy from the apostles which was embedded in all the organs of her institutional life, an unerring grasp of the real purport and meaning of the revelation to which Scripture and tradition alike bore witness”.[1]

It is in this context that we can now view the meme’s citation of St. Basil.  Epistle 283 is a very brief letter that this Cappadocian Father writes to an unnamed widow.  His closing words are those which are printed on the meme: “Enjoying as you do the consolation of the Holy Scriptures, you stand in need neither of my assistance nor of that of anybody else to help you to comprehend your duty. You have the all-sufficient counsel and guidance of the Holy Spirit to lead you to what is right.”[2]  Divorced from both the broader historical context and the narrower one of his other writings, it is understandable how the above could be misinterpreted.  However, in chapter 27 of his treatise De Spiritu Sancto we can see him introduce the concept of Apostolic Tradition as normative.

There, as Basil informs us, his opponents are accusing him and his partisans of “[introducing] this new phrase, saying, ‘with the Spirit’ instead of ‘in the Holy Spirit,’ thus employing an expression which is quite unnecessary, and sanctioned by no usage in the churches”.  In this chapter, he will “trace the origin of the word ‘with;’ to explain what force it has, and to show that it is in harmony with Scripture”.  It is next that he deploys an argument typically seized upon by Catholic apologists:

“Of the beliefs and practices whether generally accepted or publicly enjoined which are preserved in the Church some we possess derived from written teaching; others we have received delivered to us in a mystery by the tradition of the apostles; and both of these in relation to true religion have the same force. And these no one will gainsay — no one, at all events, who is even moderately versed in the institutions of the Church. For were we to attempt to reject such customs as have no written authority, on the ground that the importance they possess is small, we should unintentionally injure the Gospel in its very vitals; or, rather, should make our public definition a mere phrase and nothing more.”[3]

It should be fairly obvious that Basil here puts Apostolic Tradition on par with Sacred Scripture (“both of these in relation to true religion have the same force”).  To him they are only different in the mode of delivery.  In his chapter in the book Sola Scriptura!, Reformed apologist Dr. James White complains that this verse is often cited without Basil’s words that immediately follow:

“For instance, to take the first and most general example, who is thence who has taught us in writing to sign with the sign of the cross those who have trusted in the name of our Lord Jesus Christ? What writing has taught us to turn to the East at the prayer? Which of the saints has left us in writing the words of the invocation at the displaying of the bread of the Eucharist and the cup of blessing? For we are not, as is well known, content with what the apostle or the Gospel has recorded, but both in preface and conclusion we add other words as being of great importance to the validity of the ministry, and these we derive from unwritten teaching. Moreover we bless the water of baptism and the oil of the chrism, and besides this the catechumen who is being baptized. On what written authority do we do this? Is not our authority silent and mystical tradition? Nay, by what written word is the anointing of oil itself taught? And whence comes the custom of baptizing thrice?”.[4]

Space does not permit interacting with all of the objections which White raises with regards to Catholic claims (at least how he perceives them) on the subject of Scripture and Tradition.  With that being said, it is important to note that none of them overturn the import of the original citation which clearly puts Apostolic Tradition and Sacred Scripture on the same level (“both of these in relation to true religion have the same force”).  In short, Basil’s words in De Spiritu Sancto above are irreconcilable with a belief in Sola Scriptura.  However, the claim of the meme seems to be that Basil was an early proponent of this very belief.  On the other hand, his words in Epistle 283 and elsewhere[5] are reconcilable with a high view of Scripture which considers Apostolic Tradition as equally authoritative.  This fits well within the general observation made above by Kelly when it comes to the Patristic consensus on this subject in the third and fourth centuries, the period in which St. Basil wrote.

[5] White cites his controversy with Eustathius the physician, “Sola Scriptura”, 37-38.

October 8, 2022
The Apostolic Foundation of the Roman Church
Next Post

October 23, 2022 Mark of Ephesus and Purgatory (Part I)
Recent Comments
0 | Leave a Comment
Browse Our Archives
Related posts from The Crossroads 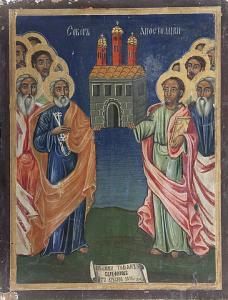